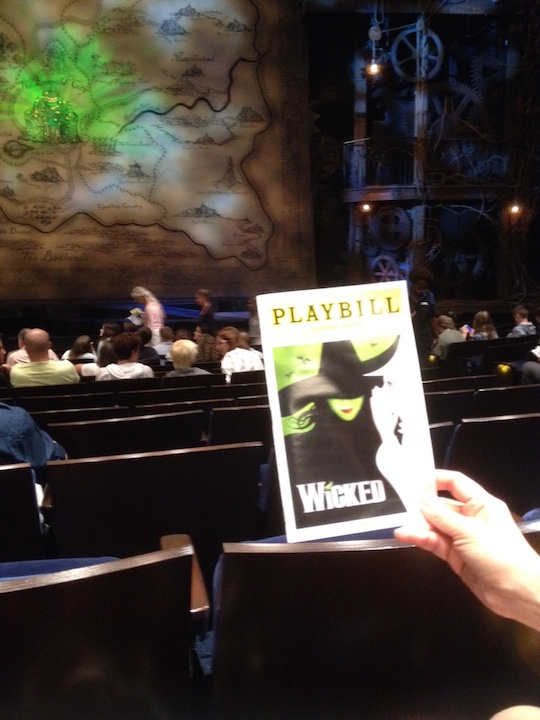 If you like comedy, drama, action and fast moving plots, Wicked is the show for you. I sat next to a little girl, age 11 and she was sobbing when Elphaba was saying goodbye to her friend Galinda.

That’s how captivating the show was. Even young girls sobbed and mature men cheered!

Wicked debut in Broadway on October 30, 2003. Today it is still one of the most popular shows on Broadway. With popularity comes higher price and often, sold out seats.

If you are like me you may be looking for someone to tell you where to sit and where to buy your tickets. I searched everywhere, made mocked bookings on Ticketmaster… and here is what I discovered.

Getting a good seat at the Gershwin Theater is possible. Our seats at Front Orchestra middle row, J115 and J116 were excellent. No obstructions and close enough to see the facial expressions of the performers. And I could see the dragon and swinging monkeys without the need to tilt my head back. 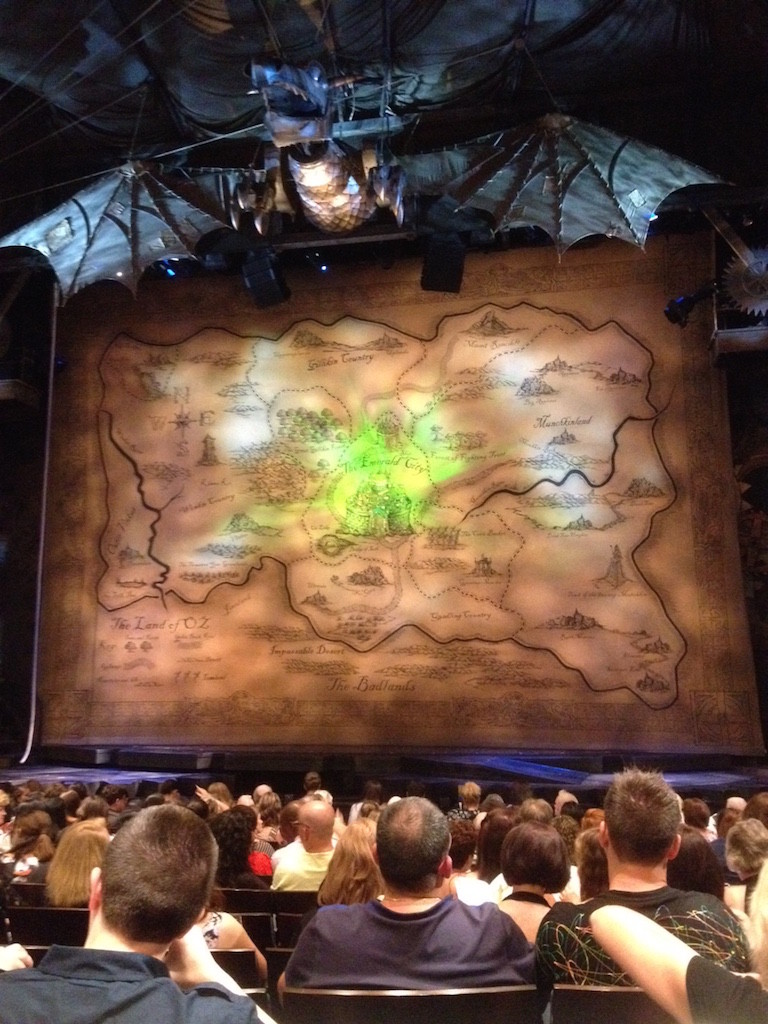 However, one thing to point out is, if you are not five foot eight and you’re sitting behind a tall person, your view may be obstructed. That was my little problem. Thankfully, the seat next to the tall person in front of me was empty. I guess this may be a problem for front orchestra seats for someone who is shorter than the person sitting in front of him or her. 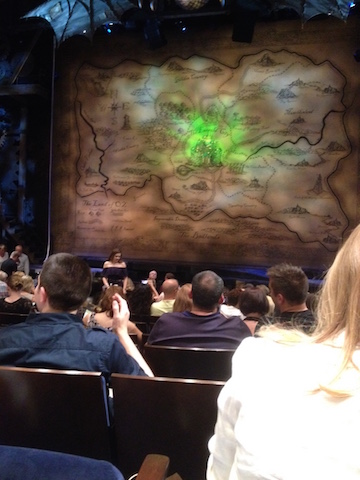 Little obstructed by a tall person in front of me

I saw Wicked with my daughter Bethany. It was her first Broadway experience. She bought me a ticket as a birthday treat. She paid $139 per ticket including all taxes and handling fees.

How to get cheaper Wicked tickets?

Lottery tickets for $30 per person

For the deepest discounted ticket, go to Wicked’s box office at Gershwin Theater at least two and a half hours before the show. And stay in line for the lottery tickets. There is no charge to enter and if you win, you are allowed to buy a maximum of two tickets for $30 each in cash. According to Playbill, entries are accepted starting two and a half hours prior to each performance. Names are drawn and tickets issued two hours before curtain.

Anyone can enter for a chance to win but you are required to show a Government issued photo ID. I was told about 30 lottery tickets are issued per show. You have to be present to enter, each person is allowed one entry and it is only available on the same day. Another advantage is you may get front row seats or the best unsold house seats. Read more on the New York Show Tickets’ website.

This may not be the best way to get your tickets if you don’t have the time or you have a tight schedule in New York City. Lottery means you are taking chances.

Note: You get affordable prices for partial view seats.

New York Show Tickets offers partial view (a little obstructed view) seats from $56 to $127. According to New York Show Tickets you may miss some of the action or scenes because of physical theatre restrictions like the support columns, mezzanine overhangs or box overhangs. In this case, it will be Gershwin Theatre’s extreme right and extreme left seats at the orchestra and mezzanine levels.

Be a member of TDF (Theatre Development Fund)

Check if you qualify to be a member of TDF. TDF tickets can be as low as $47. However seats are limited and most likely in undesirable seats at the rear mezzanine. The good thing is you get your discounted tickets in advance (not the same day).

Now you can browse real-time Broadway show listings on TKTS website and on the official TKTS app.

Get tickets on sale every day at 20 to 50% off regular price at one of the three TKTS Discount Booths – in Times Square (Father Duffy Square), Downtown Brooklyn and South Street Seaport. 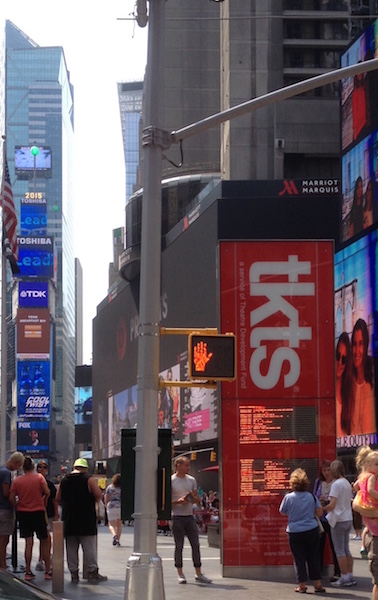 Note: They charge a service fee of $4.50 per ticket. All major credit cards are accepted.

Now TKTS issue a 7-Day Fast Pass that allows you to return to the Times Square ticket booth (window #1) within 7 days to skip the long lines.

Buy the tickets at the box office

Prior to getting my tickets at the box office I had received discounted codes from several websites. I played around with the codes and tried booking seats. But they were not favorable in terms of seats and prices.

Since I was at the Gershwin Theatre area at least once a week, one Sunday (August 2nd), I popped in at the box office to find out what they had to offer. To my surprise I was offered the seats I wanted at about $50 less. We purchased two tickets 26 days in advance. So, this was the best place for me to get the best seats at the best price.

How to find the best seats in Gershwin Theatre?

Gershwin Theatre has been the venue for Wicked since 2003. It has 1900 seats. My daughter and I sat on Row J in the Front Orchestra middle seats. I walked around the theatre prior to the curtain and this is what I found:

You can’t go wrong with Front Orchestra middle seats from Q and below. Middle seat numbers starts with 118 to 101. Avoid partial view seats on the extreme left side and extreme right side Orchestra seats with double-digit numbers. Also avoid the first four front row seats near the stage.

I stood at orchestra rear row Z and took a photo and this is the view... 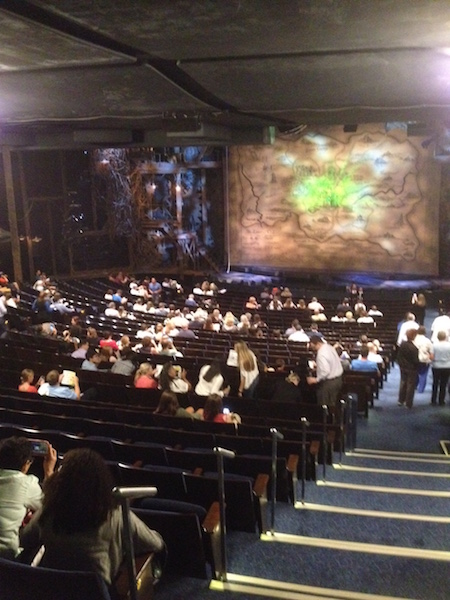 The seats are a little far from the stage but they are better than partial view seats. I didn’t get to the mezzanine floor but was told by Jose, one of the hosts that Front Mezzanine Center provides good views especially those in the middle.

During the 15-minute break there were at least 50 women in line waiting to use the restroom. There was no way some of these ladies would get to their seats on time after using the restroom. I did my homework on this subject matter and decided not to purchase a drink at the theater. (As bottles of water were being sold by vendors walking around the theater for $6 each!)

This is the untold story of the Wizard of the Oz. The story of emerald green-skinned Elphaba and the beautiful rich-girl Galinda. It’s a story about being weird, friendship, love, and you need to get there to find out more. It is a family-friendly show.

Which is your favorite seat at the Gershwin Theater? Please share, thanks!