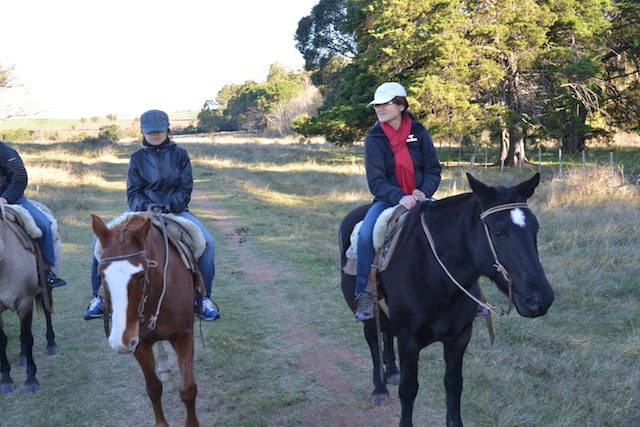 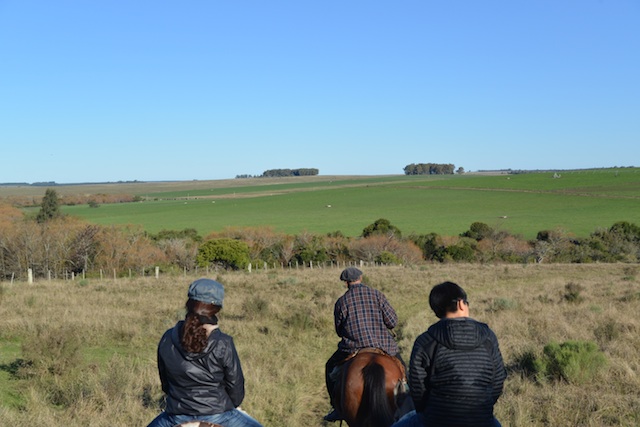 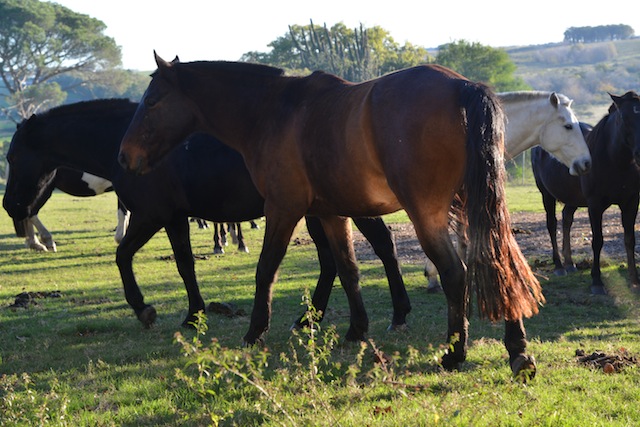 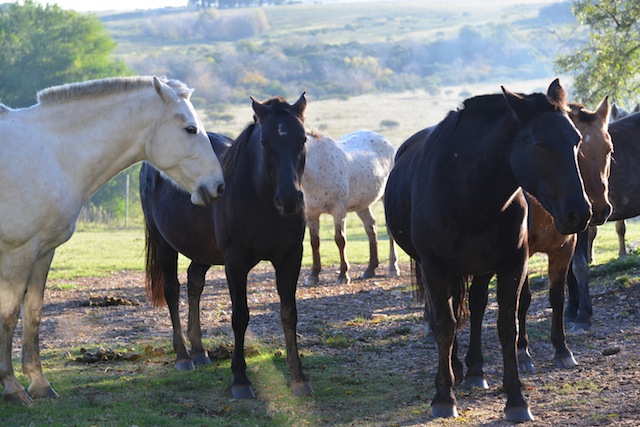 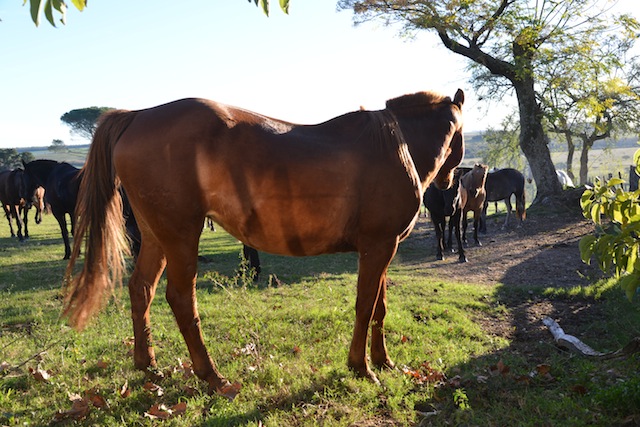 Nervously I went up the black horse and here I am looking really straight and petrified. This was the first time I was on a horse without someone holding on to the animal. I was in control, or should I say didn't know what to do. Beto said to move the rein to the right if I wanted the horse to move to the right, left for the left and to pull back if I wanted the horse to stop. I was so confused that I was just moving everywhere that I wanted which sometimes confused my poor horse. My horse was the slow one...always preferred to be at the back of everyone else. My daughter said because he sensed my nervousness. When Beto came to the rescue and rode behind me, my horse would start speeding up. At one point he even galloped to the front. Another time he refused to cross the little stream until Beto used a tiny whip. 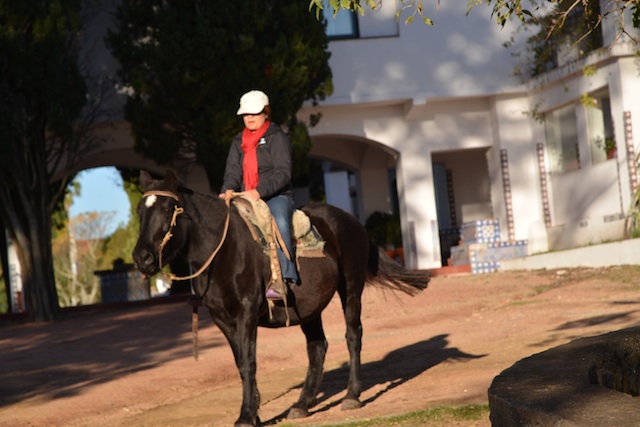 Everyone else seemed to have fun while riding in the peaceful rolling hills of Uruguay. My daughter even took her phone out and did a Vine video and took pictures... 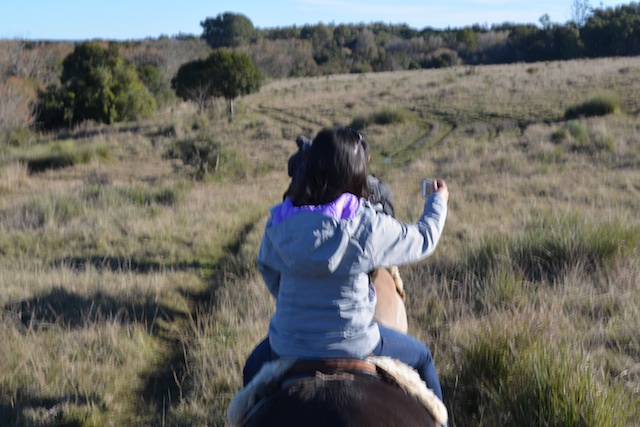 Riding through the woods, flat land and streams was a way to see the other side of the estancia. Less than 50 years ago, San Pedro de Timote was a working farm and gauchos were busy tending their sheep, cows and horses in the area we rode through. We rode into the evening sun and Beto said we would meet again by the fire the next morning for mate and torta frita. 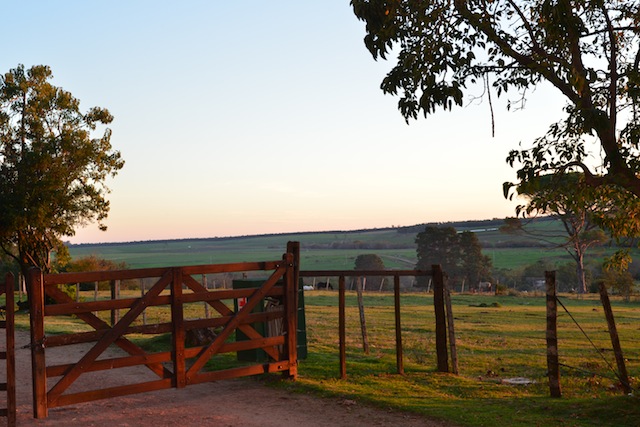 Would you do that? Drinking from the same straw with the gaucho and the rest of the estancia guests? Gauchos are often seen in pictures and documentaries or movies drinking mate or grilling meat by the fire. No visit is complete without a time by the fire drinking mate with the gaucho. So we gathered around 8:30 a.m. by the fire and enjoy the cold day sitting by the fire with warm seats (see photo below) and chatting with Beto and his assistant Cecelia. The conversation was in Spanish and I guess we only understood each other about 10 percent of the time (that's it). 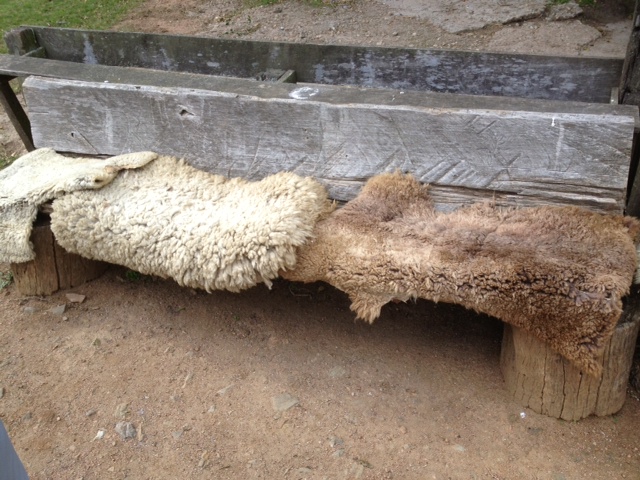 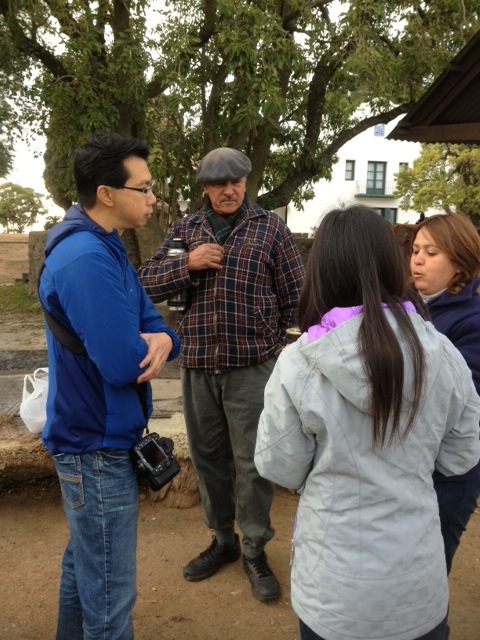 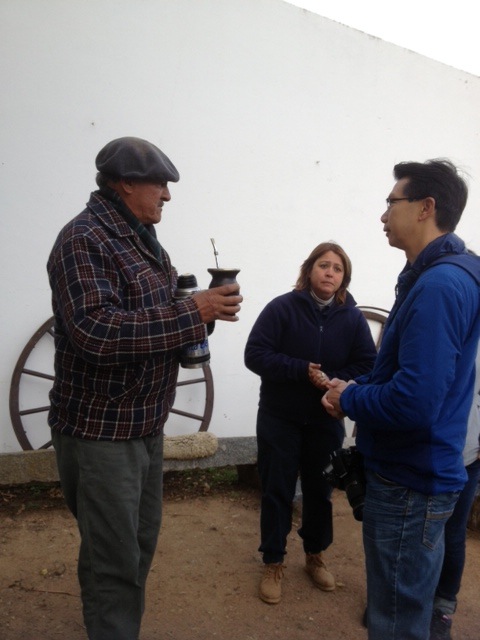 Cecelia taught us the art of making mate and holding the thermos. Then we drank from the same guayaki gaucho gourd and bombilla (metal straw). It definitely seemed like a bonding time, like a communion on a Sunday church service. 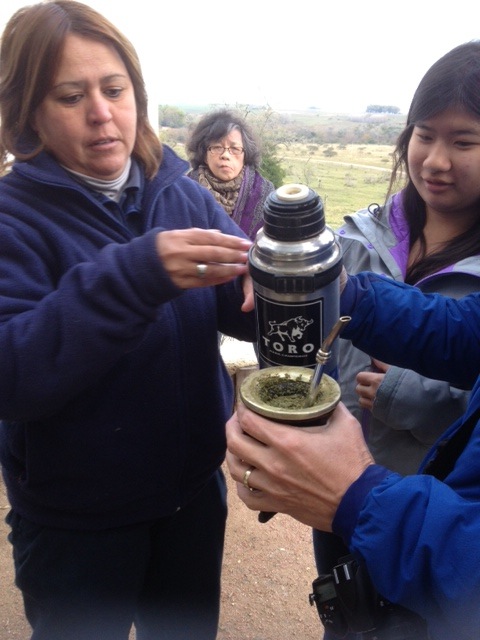 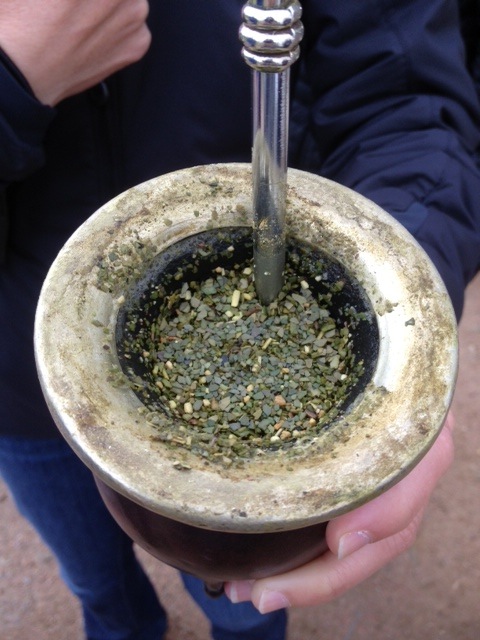 We were to drink all of it before adding water, fill it up and pass it on to another person. Cecelia is the daughter of a retired gaucho from estancia San Pedro de Timote. Sitting by the fire, Cecelia warmed the cold tortas fritas, using a long skewer and placing the torta frita on the fire. The fire was so comforting on a 40 degrees Fahrenheit morning temperature. Gauchos are known to be good in starting fires and cooking meat with the fire. 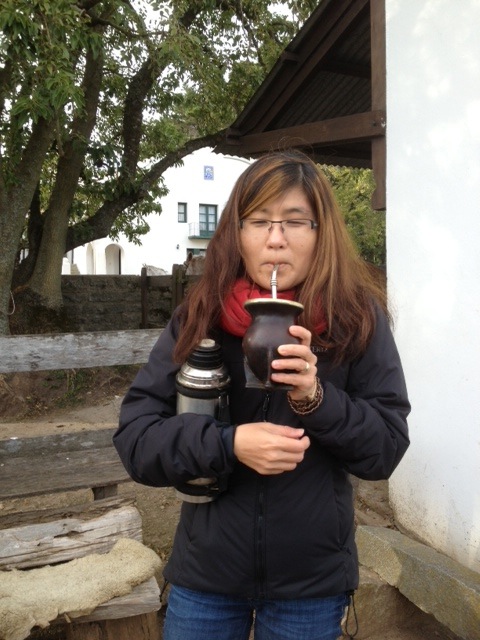 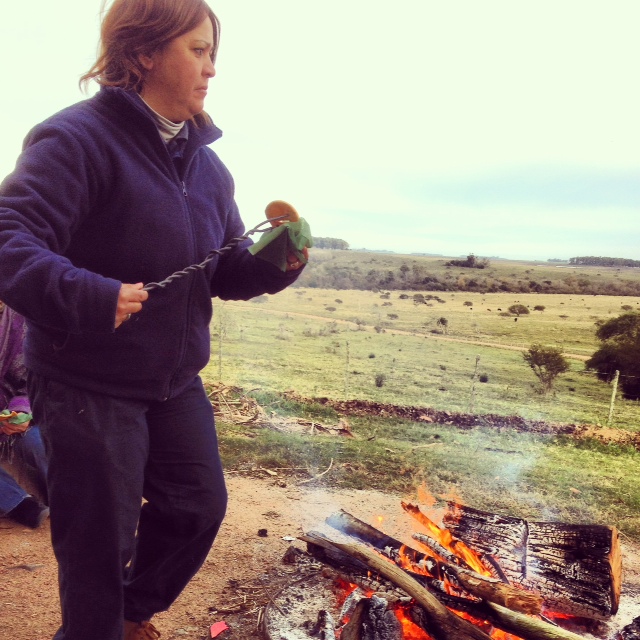 The scene was like in a movie. Beto and Cecelia invited us for another round of horseback riding after breakfast. The teens and my husband took off again for another fun ride. Looking at the gaucho pants that Beto and Cecelia were wearing, I asked where I could buy one. They said it is warmer than my pair of jeans. Surprisingly, Beto came out from the barn with two pairs of women's gaucho pants. I tried them on and my sister tried the other. We bought each for 450 pesos.

Now I have gaucho pants for my overland trip through South America. This is definitely a touristic way of experiencing horseback riding and spending time with a gaucho. I asked Beto how it felt to be herding humans instead of cattle or horse...my question was lost in translation.

Here are photos with my new found friends, Beto and Cecelia. They are the most wonderful people in Uruguay providing genuine hospitality and care: 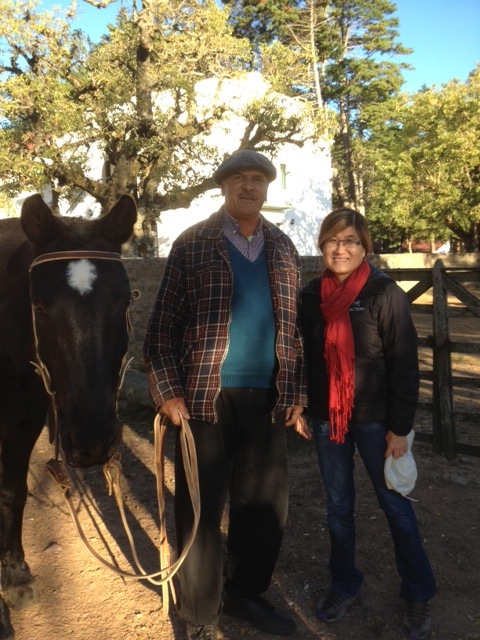 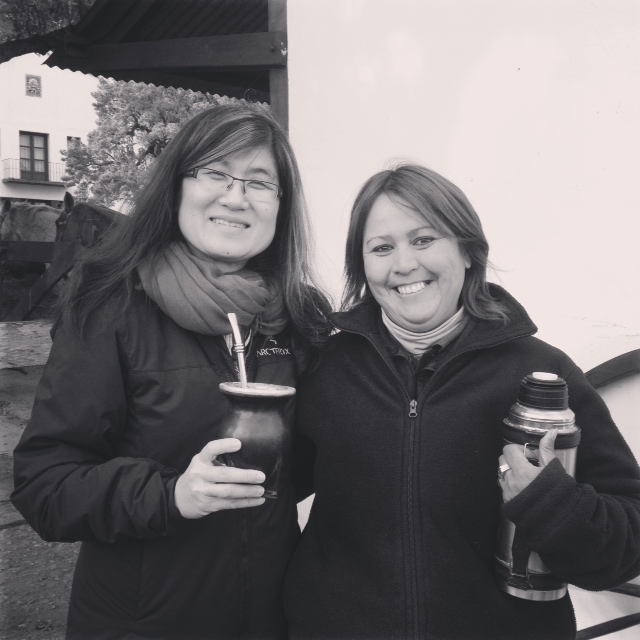 And a photo with Gabriela Munoz who made all the arrangements including our public bus and taxi reservation: 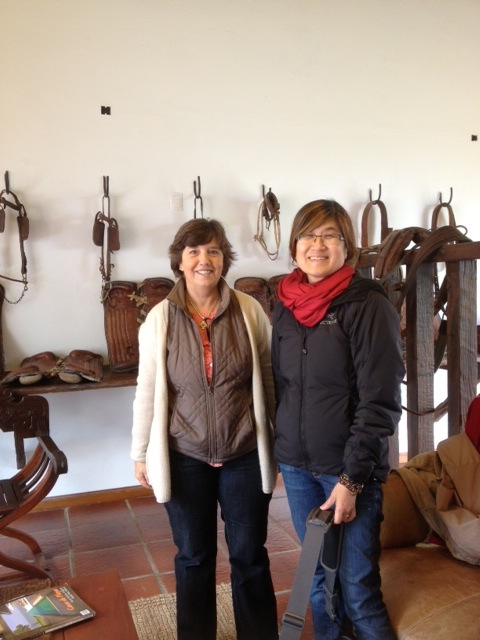 « Eat Like A Local In Montevideo: Chivito and Milanesa Sandwich
Biking in Puerto Natales Chile »