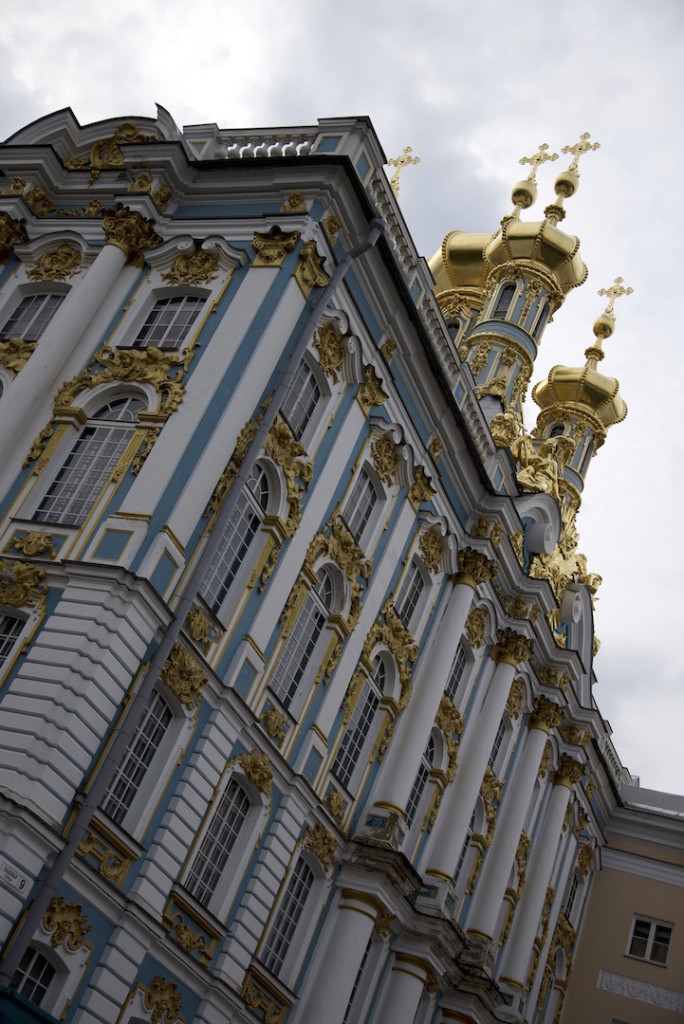 Without a doubt we would not have made it to Catherine Palace if we took the mini bus without the help of Erik, our Trans Mongolian tour leader from England. In fact Erik made a few mistakes with the bus routes and we had to make a few detours before getting on the right mini bus. It was an adventure taking the mini bus to Catherine Palace and Park in Tsarskoye Selo. 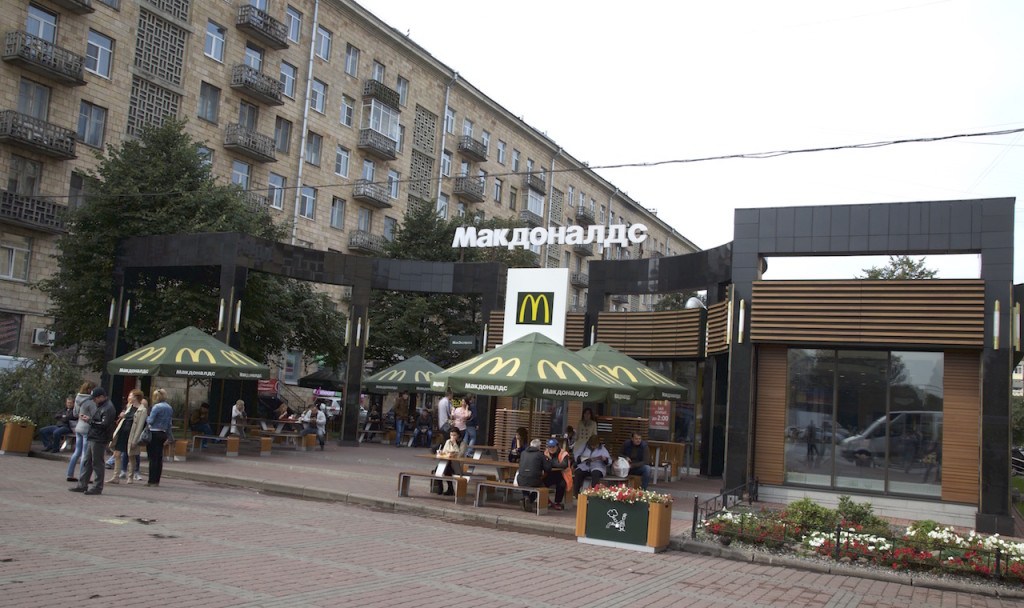 Getting closer to the mini buses. Grab a coffee from McDonald's while you wait!

We count it as part of the fun of traveling around the world with two teens in tow…. 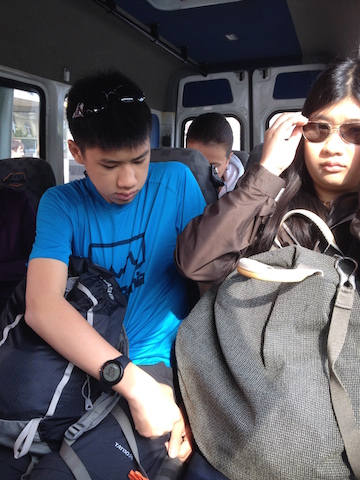 The teens in the mini bus

First we took the metro to Moskoyvskaya Metro Station. Exiting from the metro station we followed Erik, crisscrossed several streets, Erik asked the locals in Russian and we found the right marshrutka (Russian for mini buses) to Pushkin (Tsarskoye Selo), located at the southern part of St. Petersburg.

I guess if you speak Russian you can attempt to take the mini bus and save a lot of money visiting Catherine Palace and experiencing local transportation with the locals. If you can’t speak the language and do not have the patience to go through the little hassle of looking for your transportation you are better off reserving a tour with a tour company.

Using the mini bus saved us, a party of four over $200. A typical tour to Catherine Palace from St. Petersburg is about $60 per person. Taking the public transportation with the locals was the best part of this short journey from St. Petersburg to Tsarskoye Selo. For help I recommend visiting Tsarskoye Selo’s website. They recommend these mini buses from Moskoyskaya Metro Station:

Catherine Palace and Park exemplified extreme indulgence! Imagine over 200 pounds of pure gold were used to decorate the exterior of the blue and white palace. The intended small suburban palace built by Peter the Great for his wife Catherine became a grand summer palace when their daughter, Empress Elizabeth Petrovna took over in the mid 1700s. 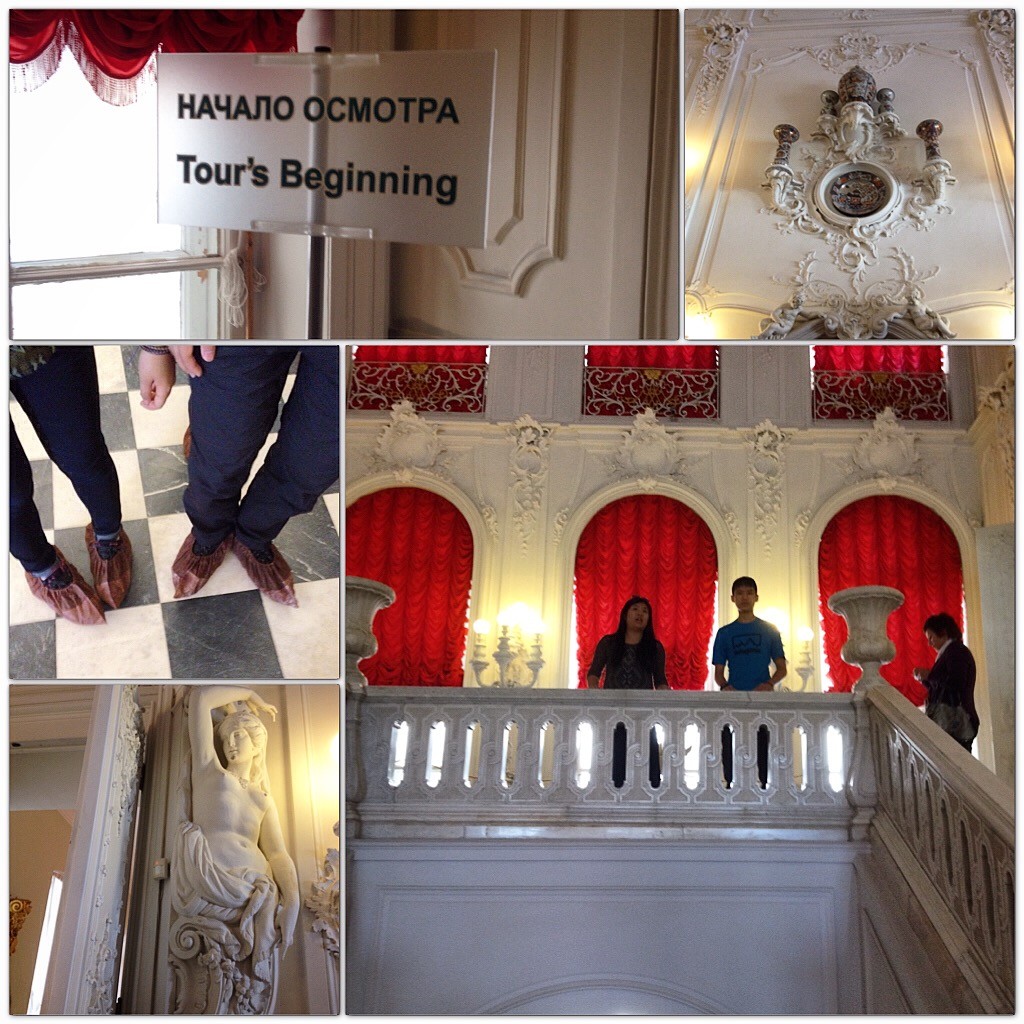 Before starting The Golden Enfilade route you must wear shoe coverings and proceed to the Grand Staircase.

The 10,000 square feet Great Hall is covered with gold murals and surrounded by large windows. The ceiling's large fresco was named The Triumph of Russia. 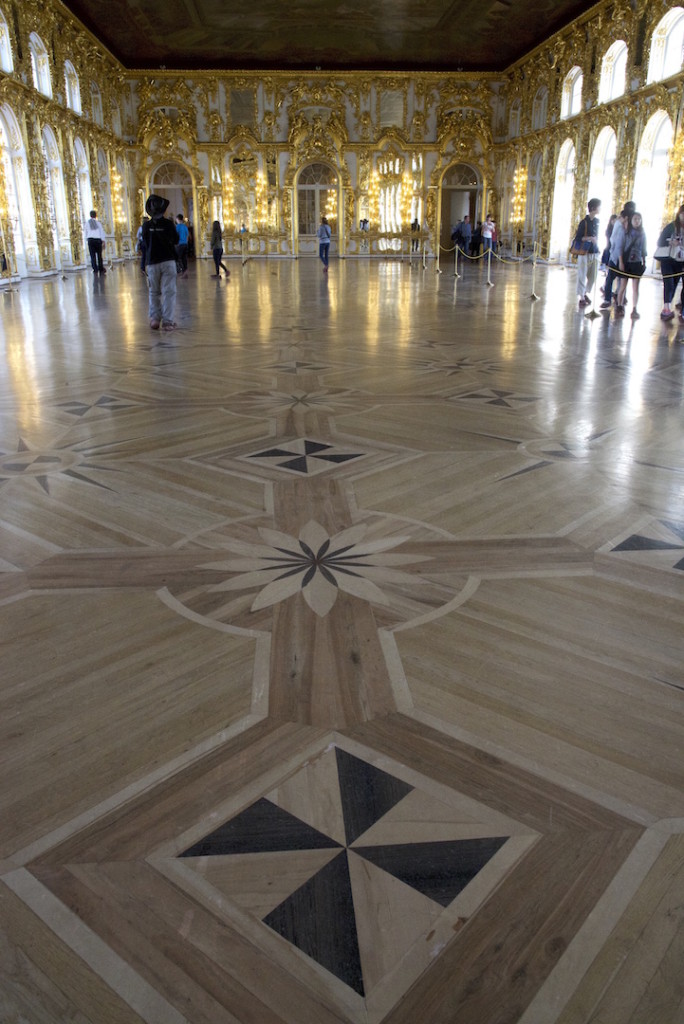 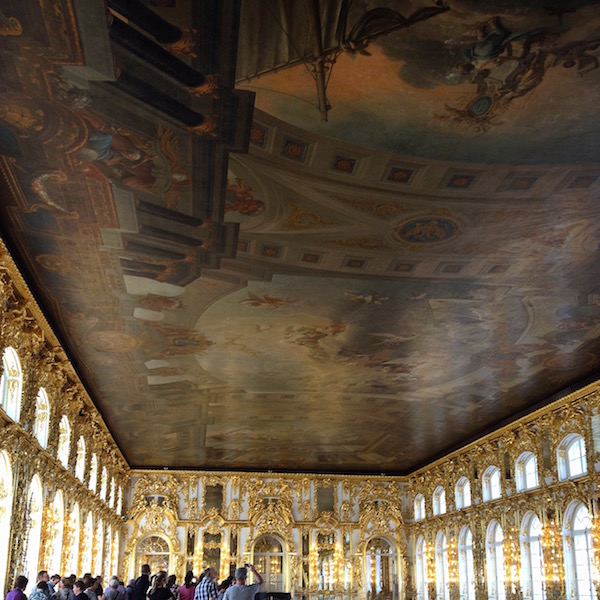 Triumph of Russia, the largest ceiling painting in the world 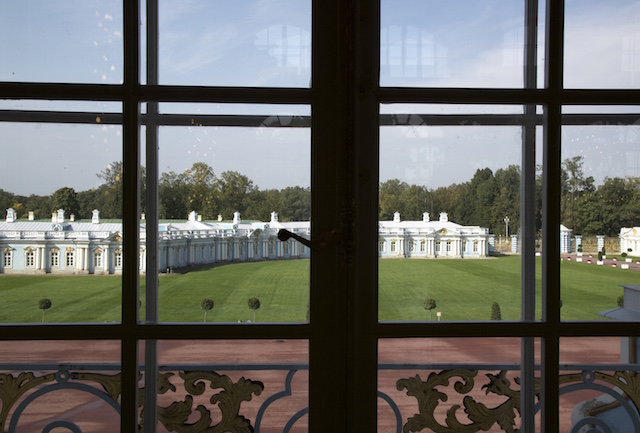 Dining Room had the same concept as the Great Hall but at a smaller scale with blue and white tiles stove. 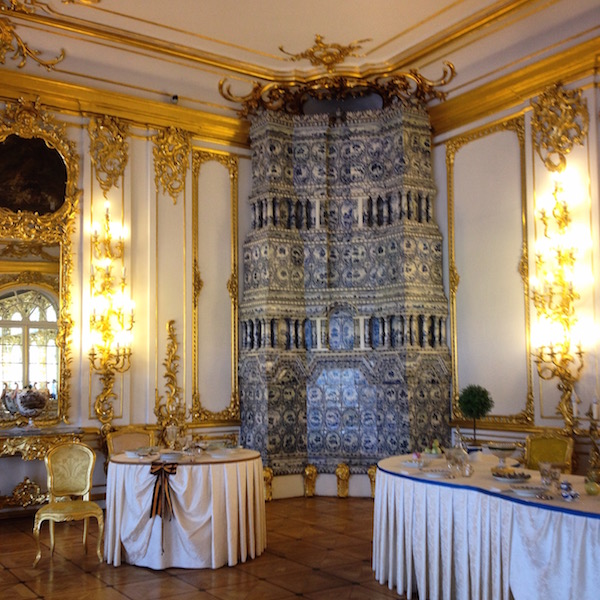 Green Dining Room created by Charles Cameron with Roman art and decorative motifs. It is located in the private quarters of the palace. 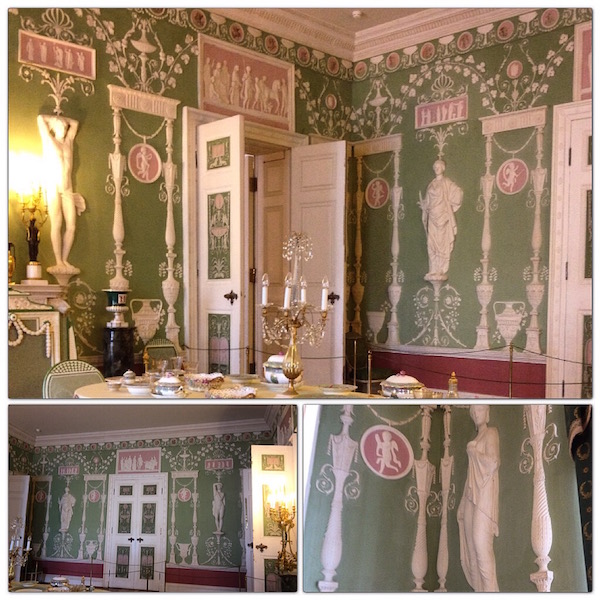 Portrait Hall with Empress Elizabeth in her formal gown: 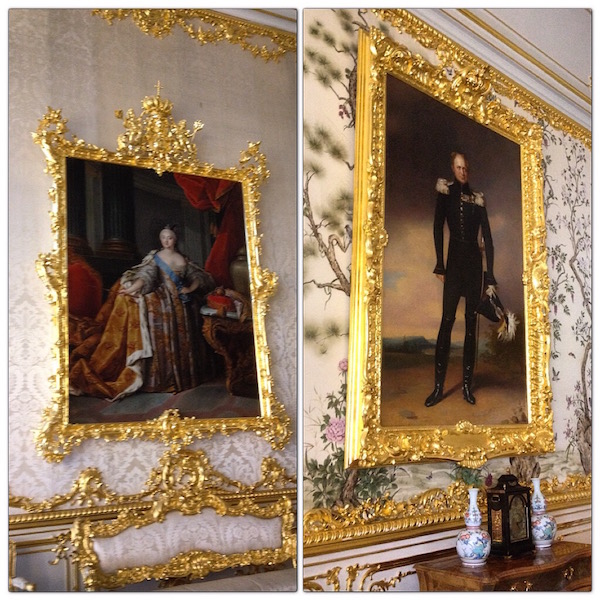 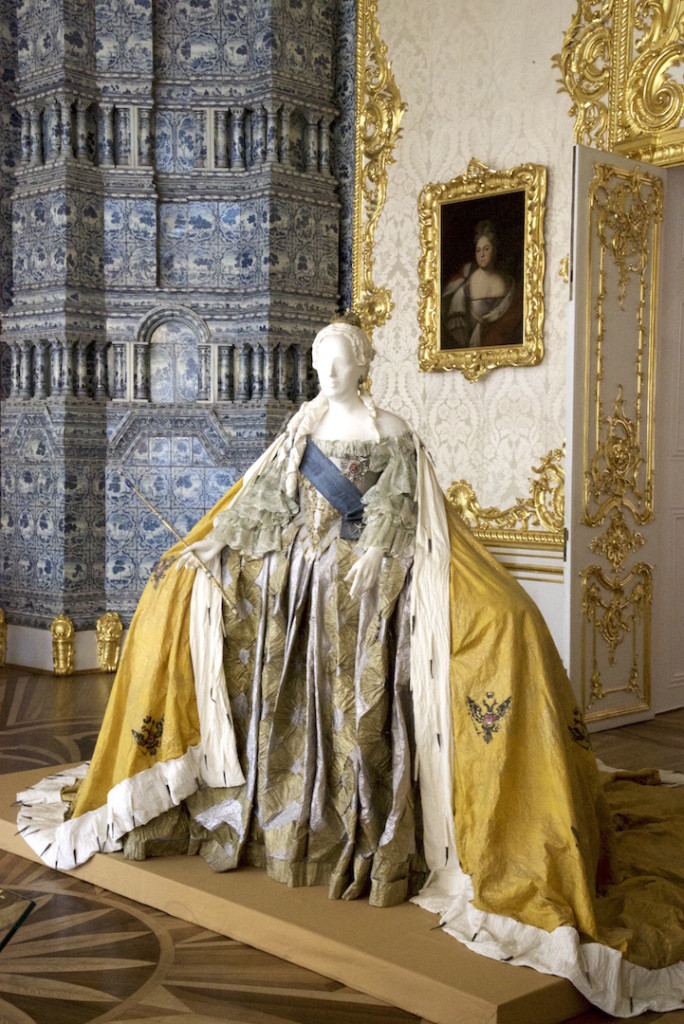 The original Amber Room had almost 1,000 pounds of amber from the Ural and Caucasus regions of Russia. During my visit it was the only room where photography was not allowed. Years ago workers were stationed in the room 24/7 to ensure all the amber panels were in place.

According to reports the Germans stole the original amber in the 1940s. Restoration work started in 1982 and was completed in 2003. Some say the Amber room with amber panels, gold leaves and mirrors is the Eighth Wonder of the World. You have to visit to find out.

The Park is equally outstanding as the palace. Some of the highlights: 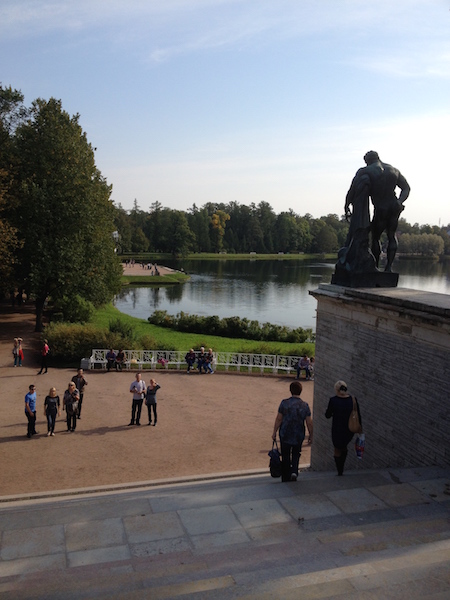 From Cameron Gallery looking down, the black statue is Hercules. 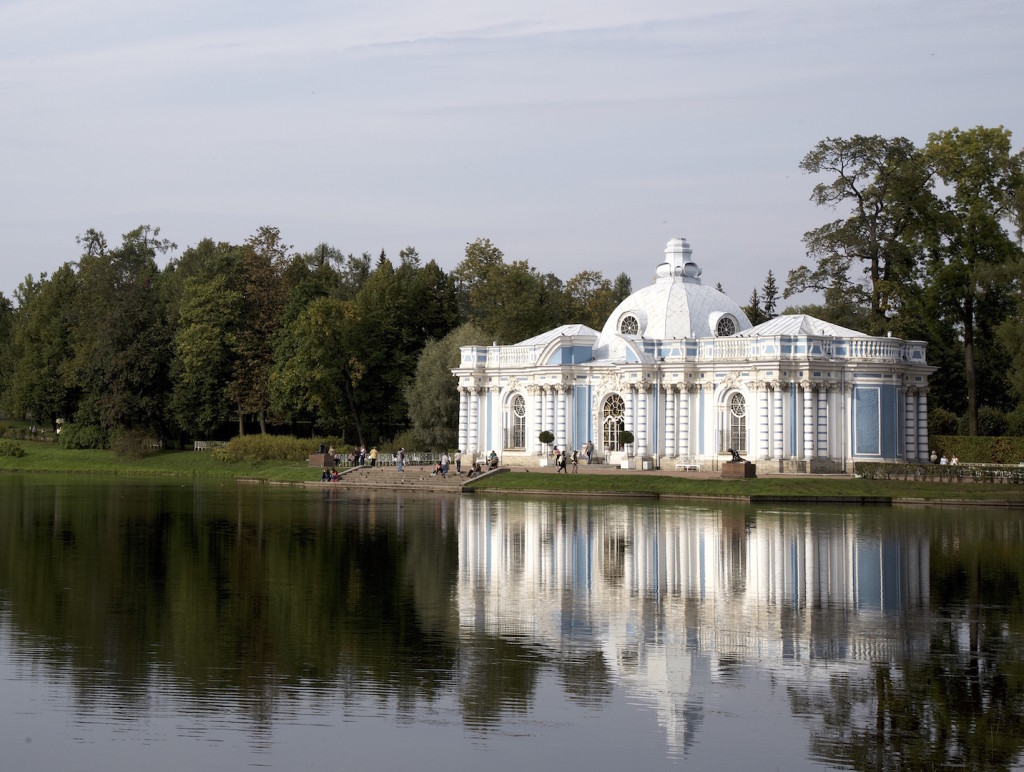 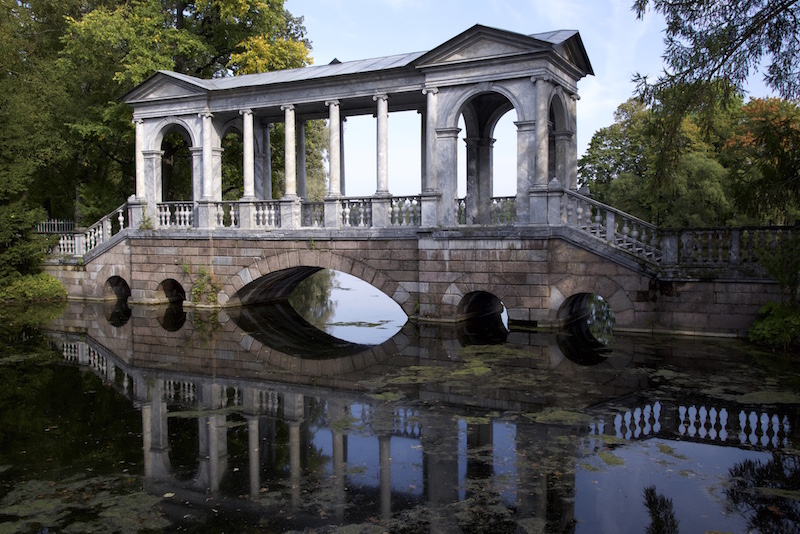 Marble Bridge with granite base 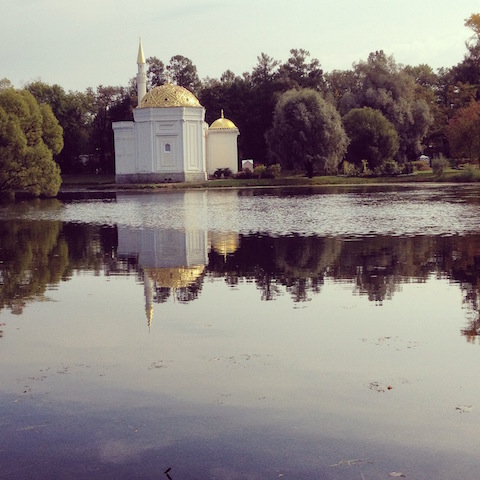 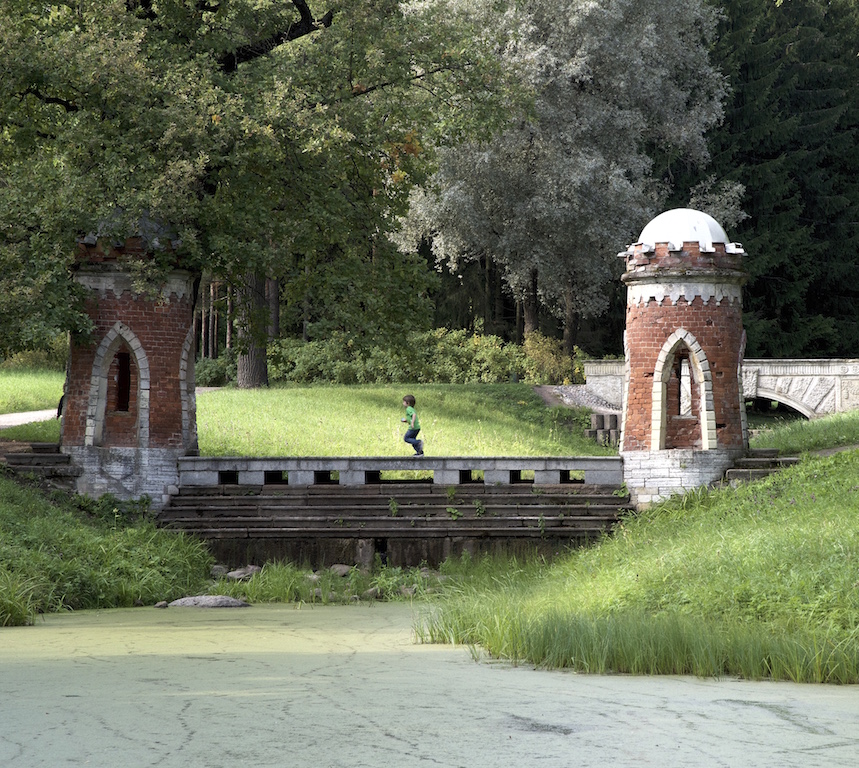 Catherine Palace and Park in Tsarskoye Selo is one attraction in St. Petersburg you shouldn’t miss. Even Elton John was invited to perform in a wedding at the Great Hall. It was the wedding of Yevgenia Slyusarenko, a model from Vladivostok and Pierre Andurand, a rich Frenchman according to St. Petersburg Times (August 17, 2011).

« Snapshots of Scenes Around St. Petersburg Russia to Debunk Travel Myths
A Taste of Russia’s Stolovayas or Canteen-style Food and Other Delicacies »