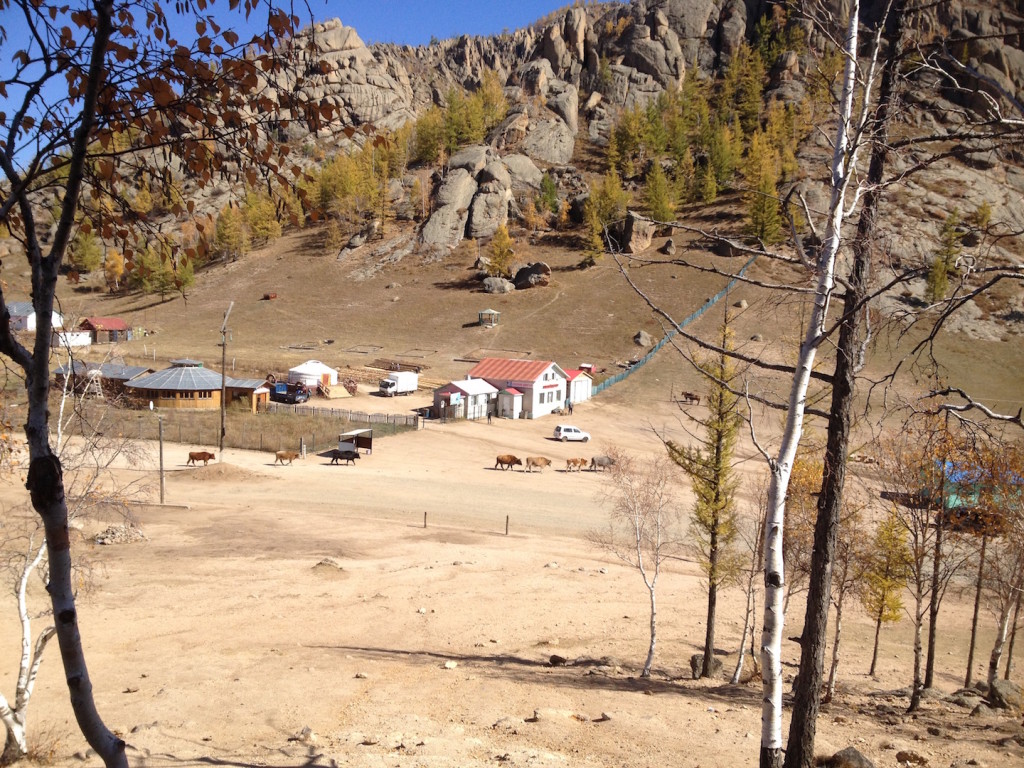 View from the Turtle Rock

No matter where you come from chances are you have to face the chaotic traffic of Ulaan Bataar Mongolia before you get to where you want to go. On this September morning it was no different. We were scheduled to stay for two nights at a ger camp in Terelj National Park after one night in Ulaan Bataar.

The journey started at 8 am after breakfast. Traffic may be a nuisance to the driver and tour guide. As for me it was a great opportunity to see the neighborhoods in the sprawling city of Ulaan Bataar. 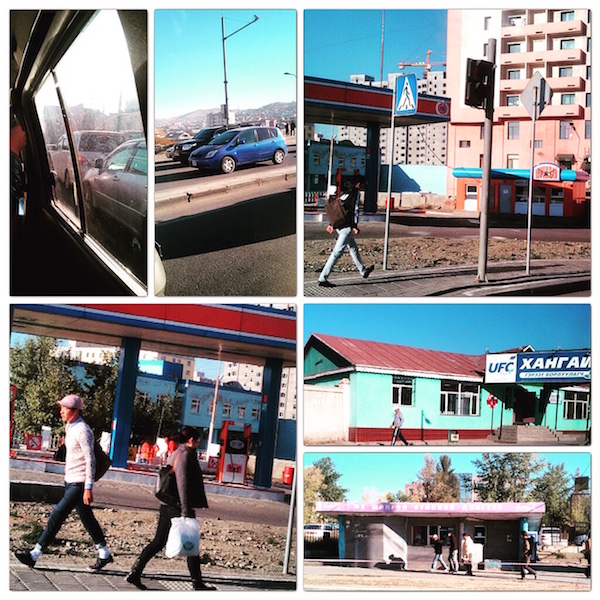 This part of my world tour fell into two categories. The first two stops were some of the most boring places I’ve ever been in the entire two years of my around the world trip. But stay tuned… because right after those two boring stops was one of the most memorable – an unplanned visit to a nomadic family who were about to pack their belongings to move to another area.

It took over an hour to travel about 35 miles to our first stop – The Genghis Khan Equestrian Statue. To the locals, Chinggis Khaan (Genghis Khan) is still an important hero. This stainless steel 131-foot tall statue sits on top of a white building located near the Tuul River in Tsonjin Boldog. Since 2009, this attraction is still an unfinished project. The planned 200 ger (Mongolian yurts) complex of shops, restaurants and accommodation is still in the planning process. 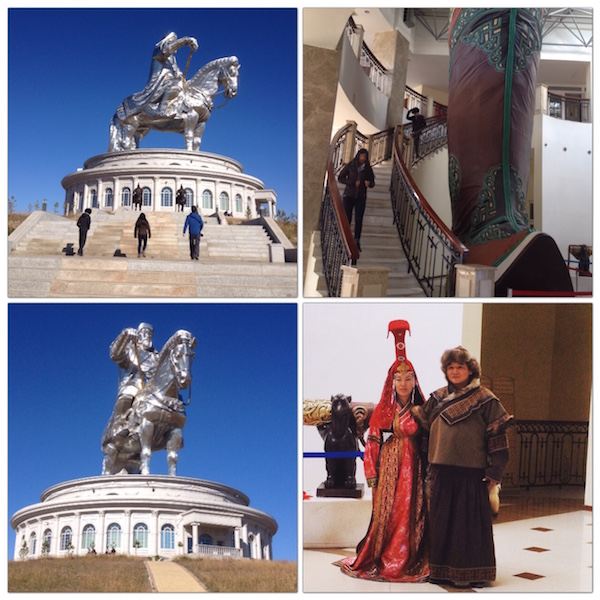 The uneventful stop continued when we stopped at the Gunjiin Sum, a temple built in 1740 by Efu Dondovdorj (the grandson of the powerful leader Tusheet Khan) to remember the death of his first wife, Amarlangui from Manchuria. The temple was part of a huge monastery in Mongolia.

According to Amran, the tour guide, Efu Dondovdorj's wife died tragically upon finding out her husband's concubine's son murdered her child. The monastery was neglected during communism but was not destroyed like the rest of the temples and monasteries in Ulaan Bataar during the religious cleansing of the 1930s. Today it still looks neglected without any facilities or tourist information center.

In my opinion you can skip both places if you are not into humongous statues and neglected temples.

The not so boring part…

We learned that Mongolians use silk scarves, usually blue and blue flags to wrap around poles usually on top of a pile of stones near high rock formations or mountains. These are called ovoo. Money was thrown around the area and sometimes animal skulls too.

I saw several of these as I attempted to climb a few rock formations including the Turtle Rock. I was not up for the challenge of climbing and squeezing through tight spaces on Turtle Rock. 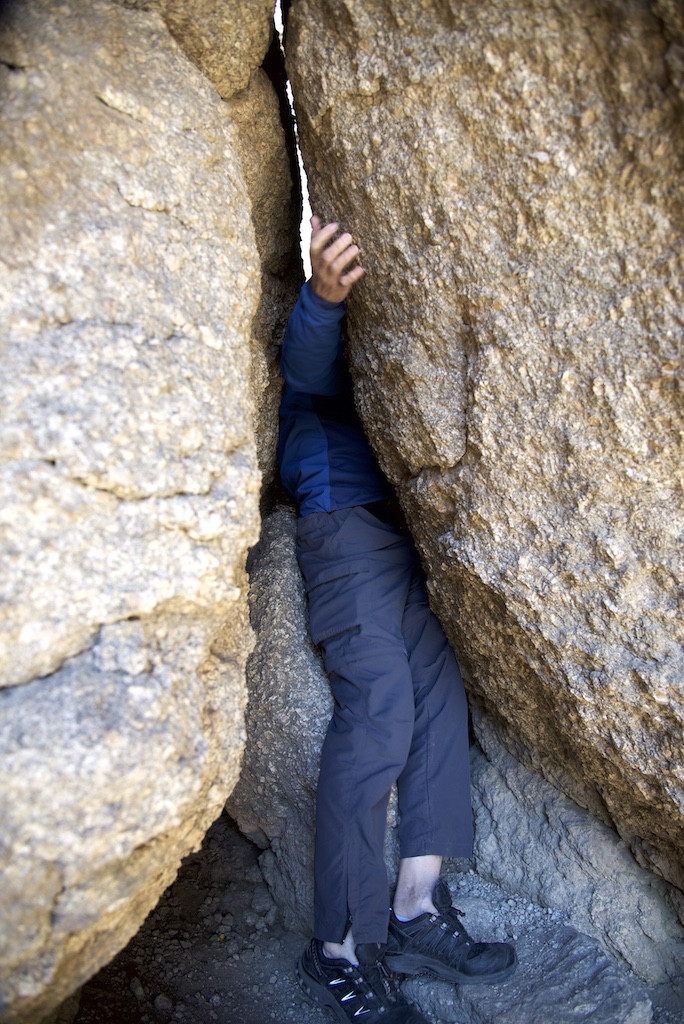 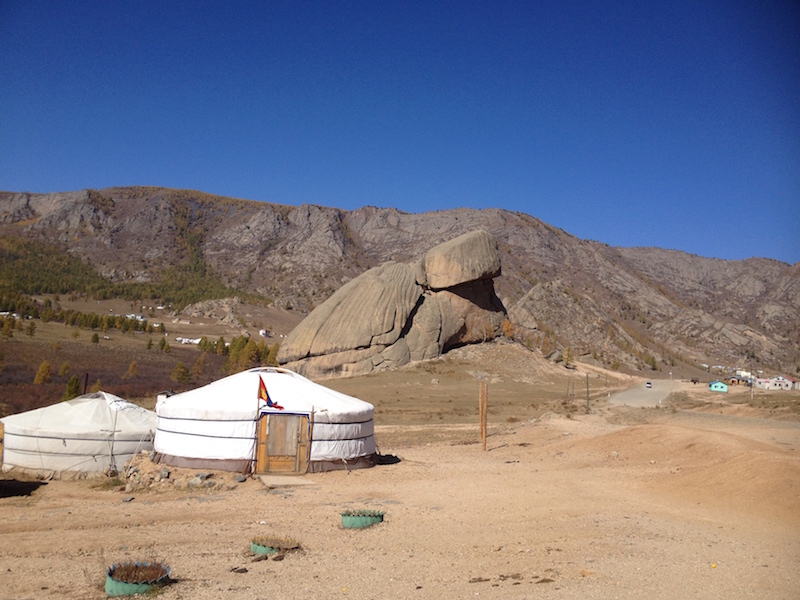 Lunch stop was at a rustic ger campsite near Turtle Rock. One of the gers was taken apart which meant I had the opportunity to see the poles, wool felt and frame of the ger. 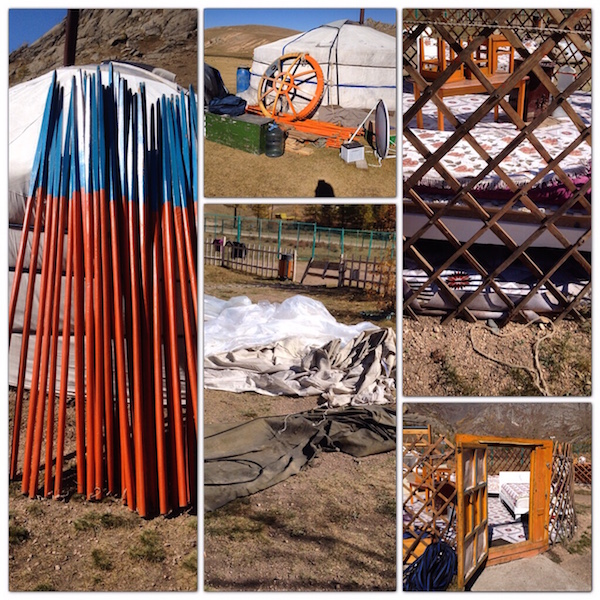 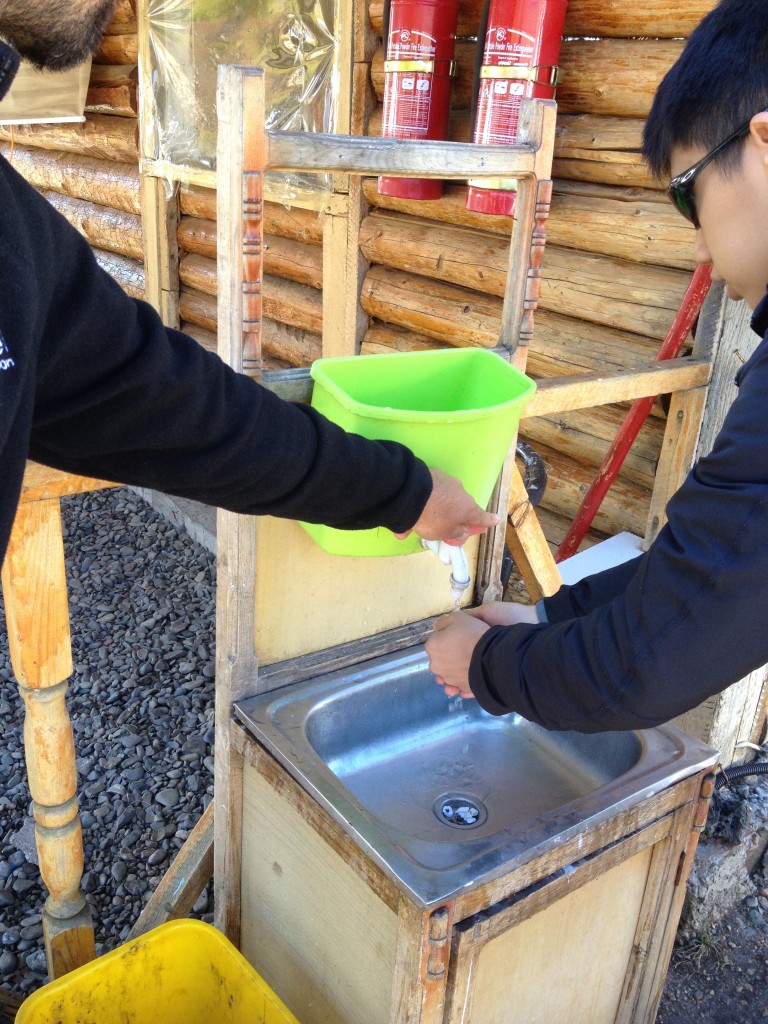 It was opportunity to taste another variation of Tsuivan noodles, a type of Mongolian fried noodle. After lunch the tour guide suggested we stop at a small grocery store to purchase some ‘gifts’ for the nomadic family we were about to visit. So I bought a bottle of cooking oil, two packets of cookies and local bread. 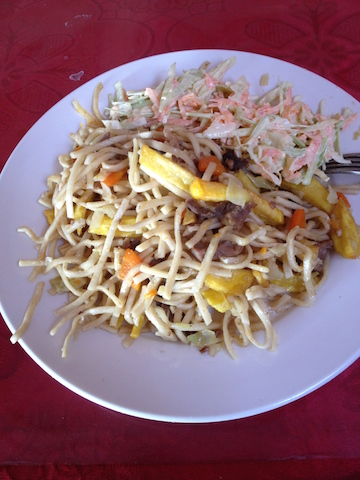 The highlight of the day...

After circling around the empty vast land surrounded by mountains with an occasional ger Amran said, “Let’s go! Give the gift to the man and say sain bain uu? (how are you),” signaling to my husband to take the gifts instead of me. After a few exchanges of words in Mongolian between Amran and the man of the house, we went into the nomadic family’s home. 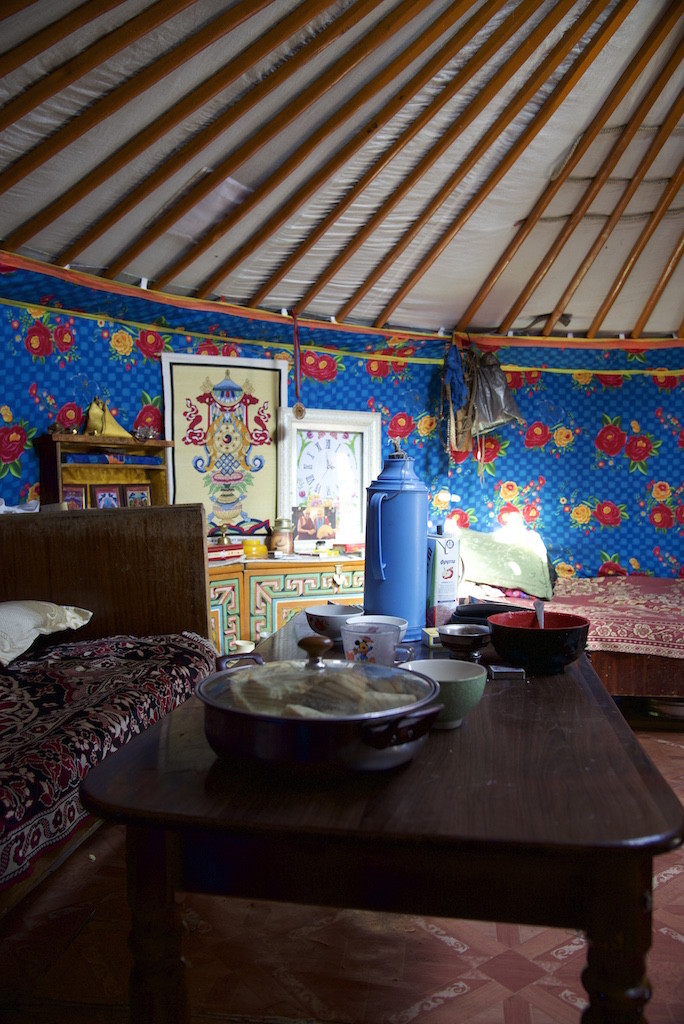 Inside the nomadic herder's ger

When seated, the wife began to serve us homemade cheese, homemade butter and bread. We passed the plate around. 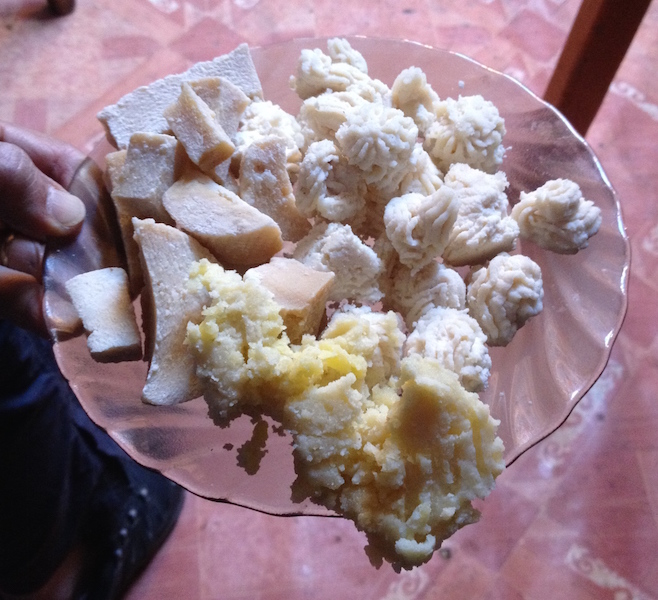 Prior to visiting the family, Amran was telling us about airag. Airag is a fermented horse milk, a national beverage of Mongolia. Each nomadic family makes their own airag and it’s the prized drink for the family. It contains alcohol. The airag making season runs between June to early October. Which means when we were there it was almost the end of the airag season. 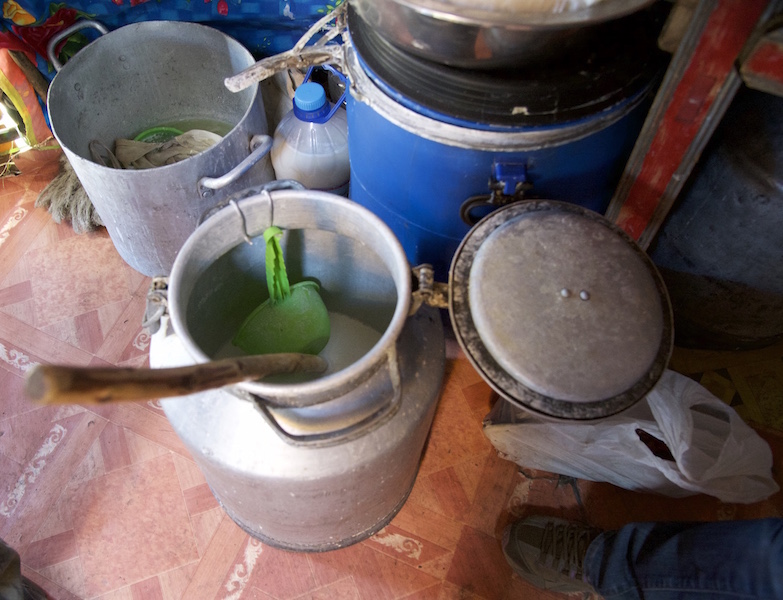 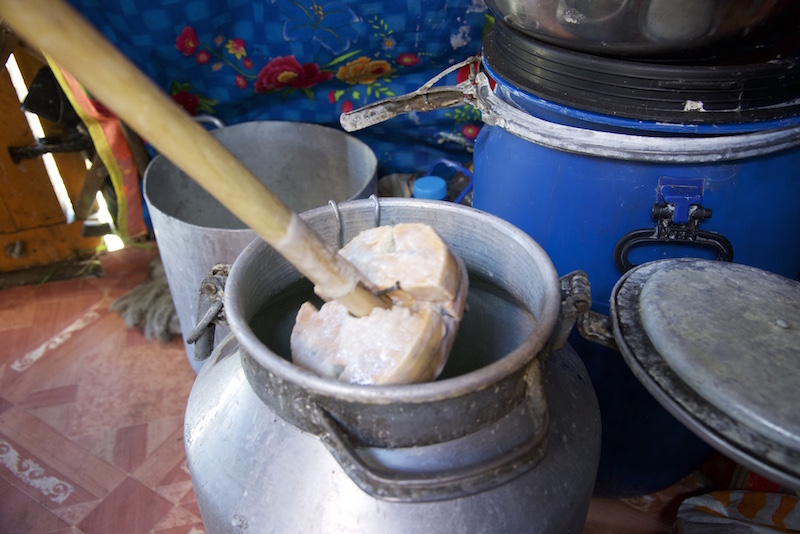 The adults got really excited especially our tour leader Erik from the UK. He had been to Mongolian once and loved airag. We were each given half a cup of airag. It tasted like kefir and slightly sour. 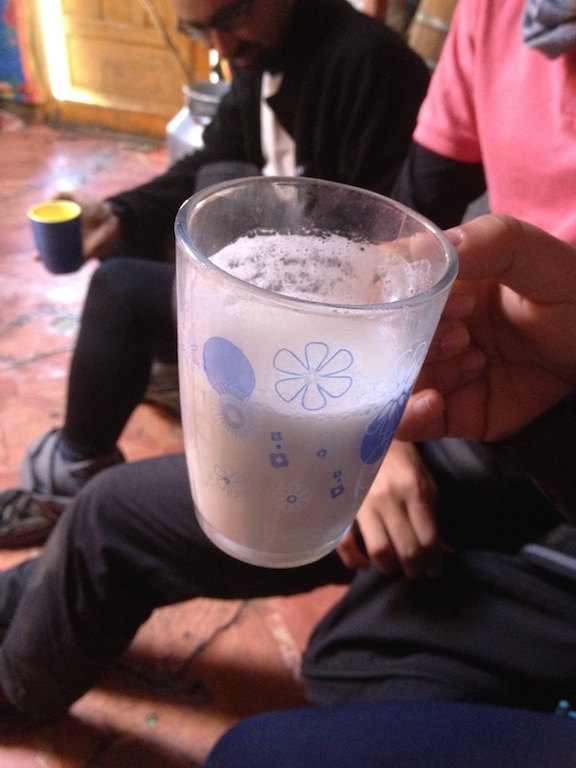 As we exited from the nomadic family’s ger, the man told us he was leaving the area to prepare for winter. One of the gers was taken down just a few hours before our visit. It belonged to another member of his family. The blue truck was to transport their belongings. Some of the family members will be on horseback herding the animals to another area. 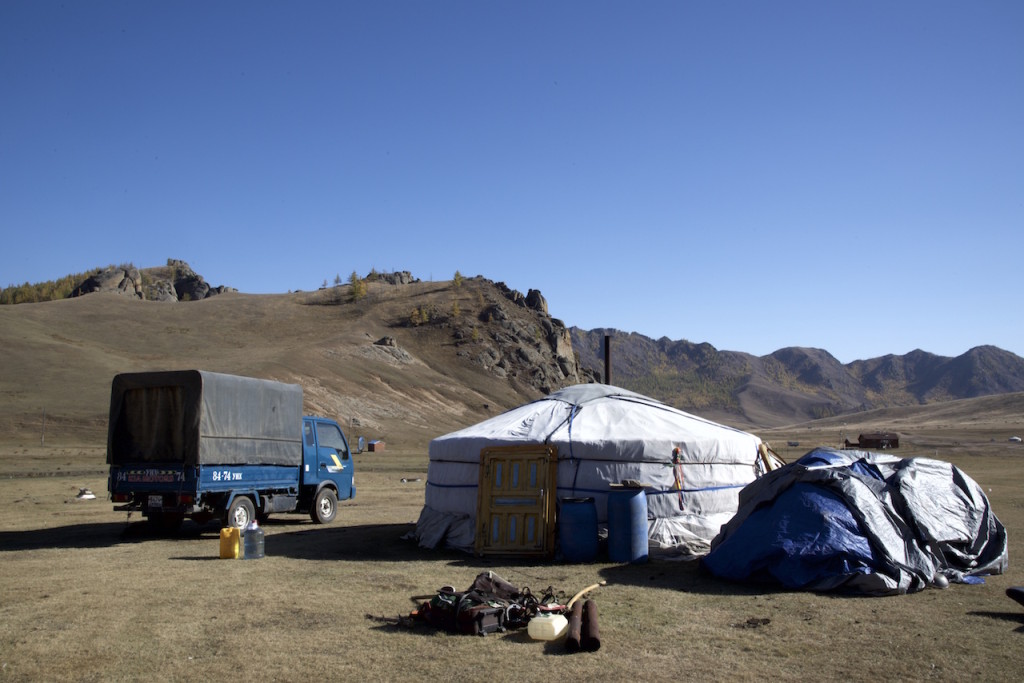 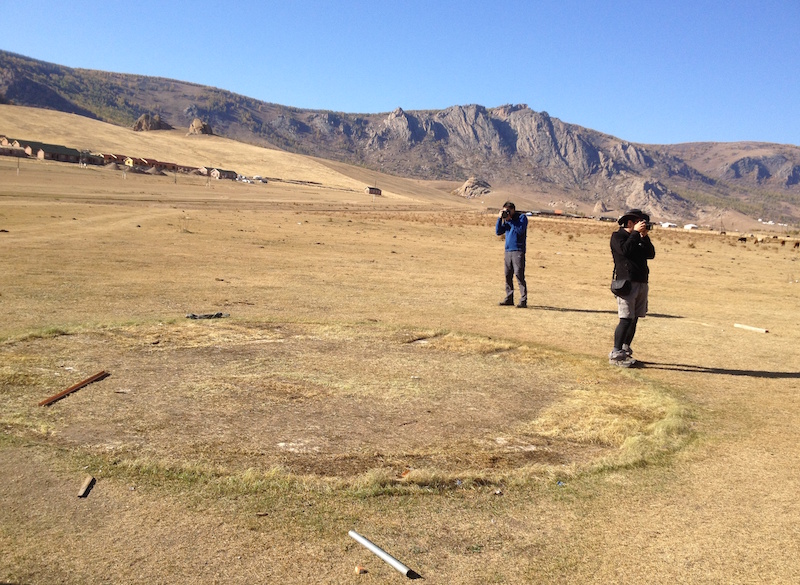 The ger was removed

I found out later that our visit to the nomadic family was unplanned. It was just a random stop and the tour guide and driver didn’t even know the family. Mongolians are thought to show hospitality to strangers. The nomadic Mongolians are still practicing this strong tradition. They believe in the Golden Rule- when they help someone one day the favor will be returned. 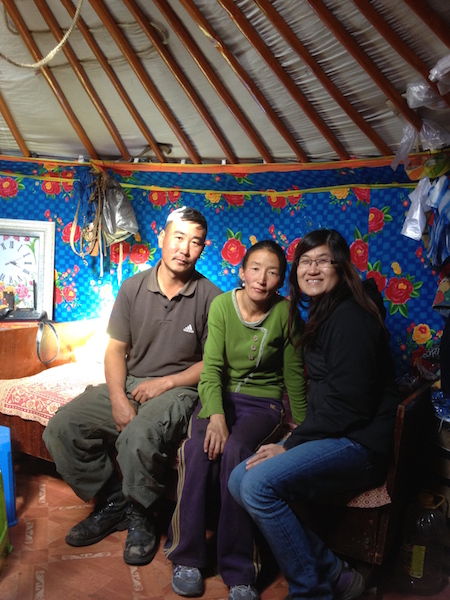 The nomadic couple (host and his wife) and me

The visit to the local ger was humbling to me. A ger is a one room house, where they cook, eat, sleep and play. Which means we were invited to sit on their private bed without prior notice.

Travel is all about the experiences. Drinking airag and visiting the nomadic family were the highlights of my journey to the ger camp in Terelj National Park.

Next I’ll show you what’s inside a ger camp including a traditional Mongolian barbecue.