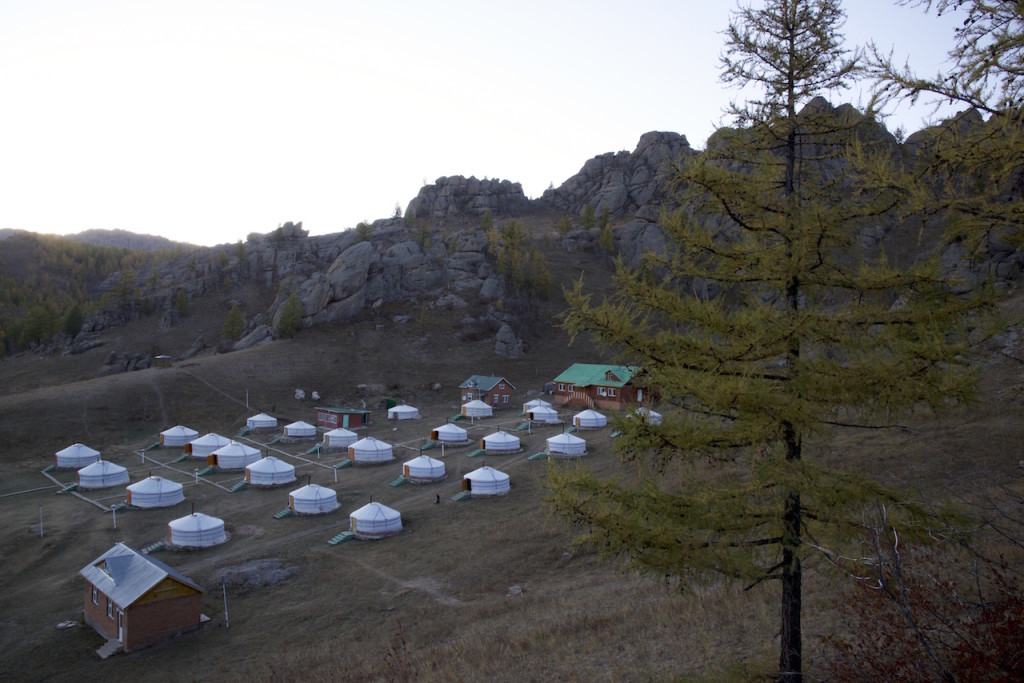 It was late afternoon when we arrived at the ger camp in Terelj National Park Mongolia. Instead of busy roads, the camp is located in a mostly untouched open space with rock formations and hills all around. No cars or paved streets – just open skies.

A trip to Mongolia is incomplete without a stay at a ger. Even if the ger is not authentic and is located in a tourist ger camp. Inside our ger for two to three people were three single beds, three night stands, a small table and a wood burning stove in the middle. We had electricity and an outlet to charge our devices. Each ger was given a thermos filled with hot water, which is a good thing if you hate inconveniences. 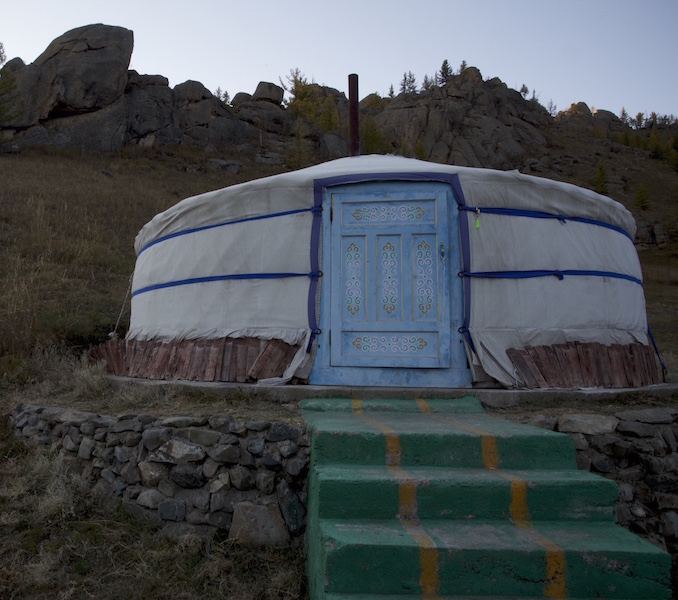 A traditional Mongolian ger is a circular structure supported by a collapsible wooden frame, an outer layer of canvas and an inner layer of felt with a door facing south. I was told, the east side of the ger is for women, the west side for men and the north side which is directly opposite the door (facing south) is reserved for older members of the family or honored guests. The family worship area (the altar) is located in the north side. 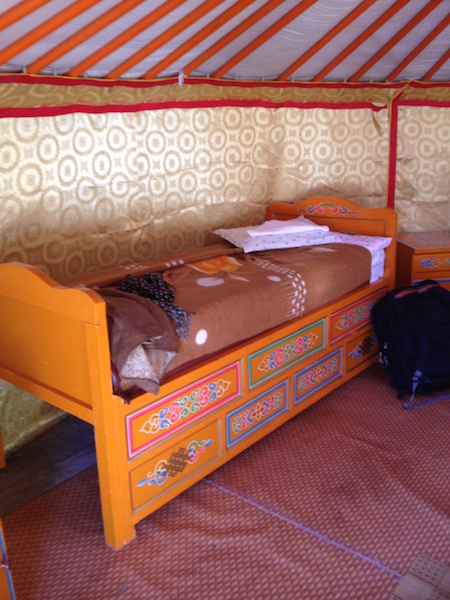 My bed in the ger 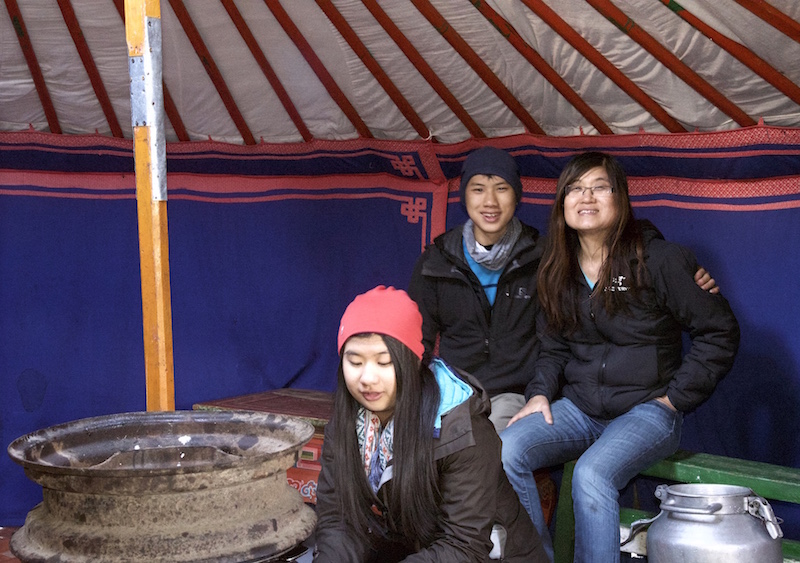 With the kids inside the ger for "cooking" 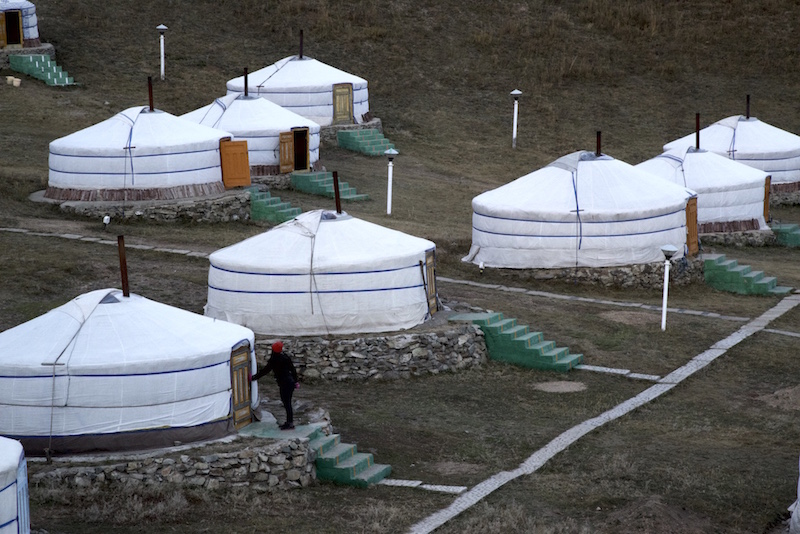 More than 50% of Mongolians still live in gers. Most of these ger dwellers are still roaming in the vast steppe land. In recent years many have been giving up the nomadic lifestyle for the city lights of Ulan Bator. This move has brought about an increase in ger districts in Ulan Bator. You can read about the ger district problems by the LA Times here.

The temperature dropped to below zero in late September when the sun went down. It was so cold that we had to wear our jeans and outdoor jacket to sleep. Our ger was not insulated and all the gers in the ger camp were set up only during the summer months. The wood-burning stove didn’t help because all the wood burned within two hours. On the second night we were given coal instead of wood. It was better the second night as the coal extended the warmth for another two hours.

Toilets are located in a building away from the ger. Men and women toilets are separated. Each had two toilet bowls and two sinks. However there was only cold water.

I didn’t attempt to shower nor did I look at the shower facilities since it was too cold to take a cold shower. 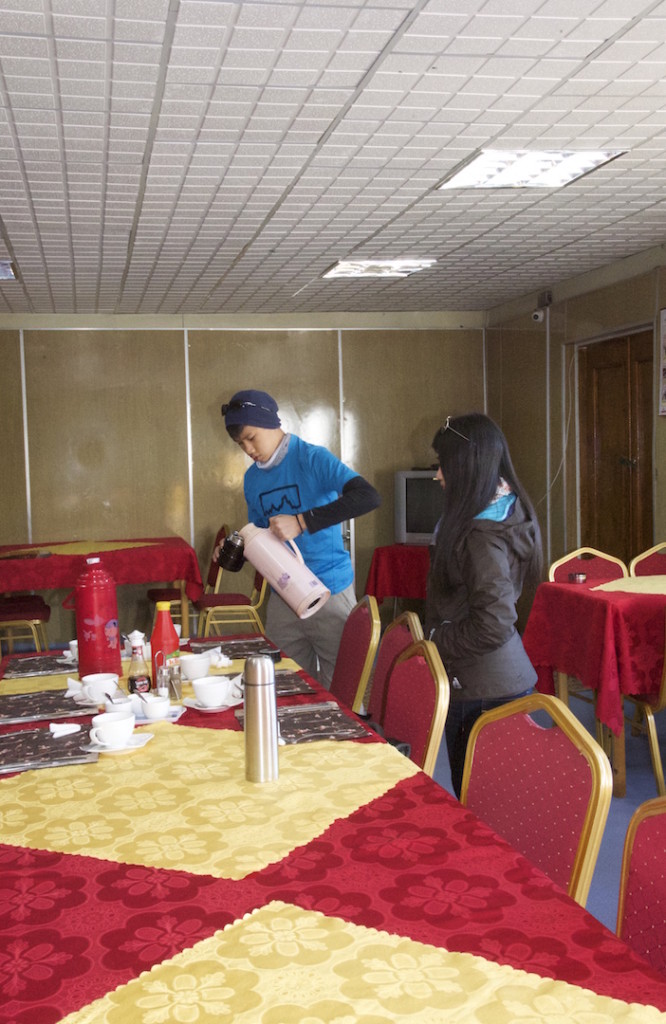 We had our meals at the common dining room catered just for ger campers. All meals were included for our two nights stay.

Breakfast consisted of Mongolian milk tea (which is warm milk and salt with a hint of black tea), instant coffee, Mongolian pancakes, toast with jam and homemade butter, eggs with ham and a variety of cereals. They were hearty and satisfying. 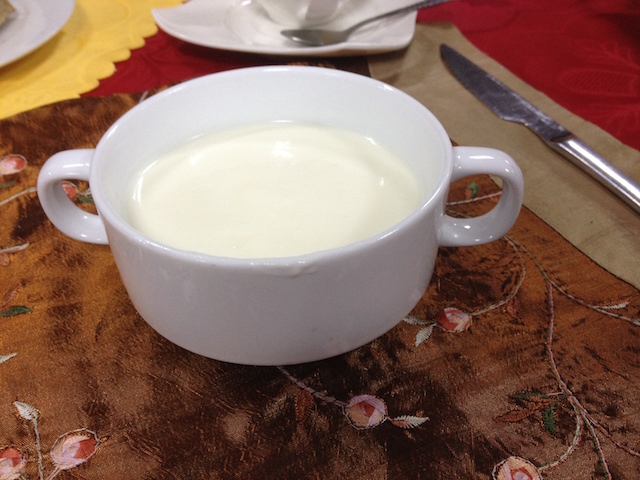 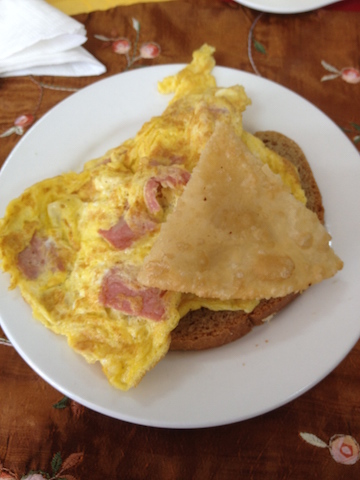 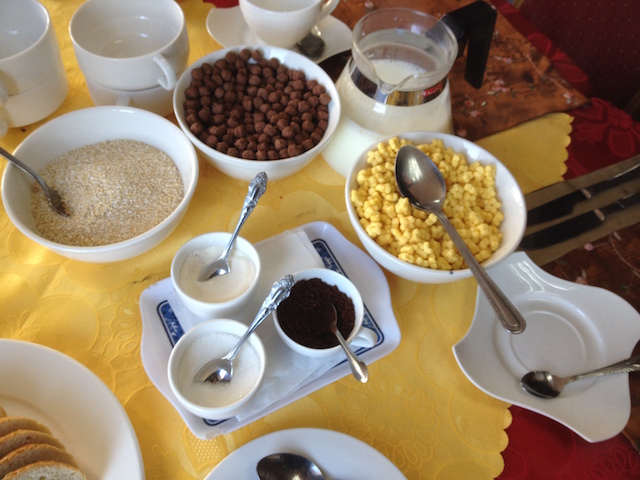 Instant coffee powder and a variety of cereals

Lunch and dinner were mainly Mongolian food like Tsuivan noodles and shul (meat with vegetable soup). 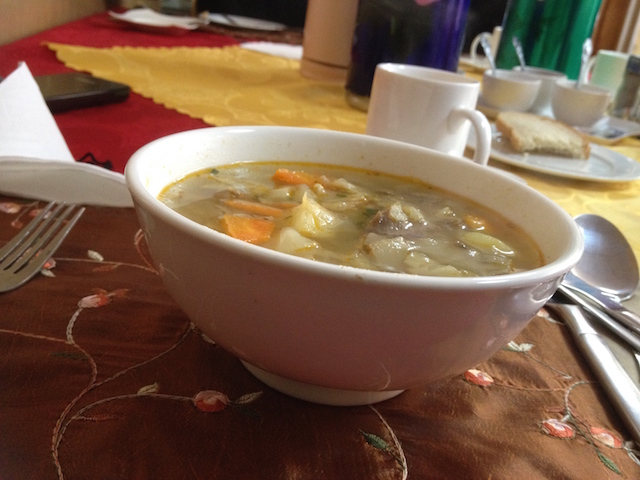 Our tour included a special homemade khorkhog (Mongolian barbecue) made by our tour guide Amran. He prepared the meal in a ger. Khorkhog is a special meal made for special occasion.

First he prepared the fire on the stove. Then he added the smooth round stones (like those found in river beds) to the fire. In a big metal container he had all the pre cut meat (sheep not lamb) marinated and set aside. In another container he had peeled potatoes, onions, cabbage and carrots. 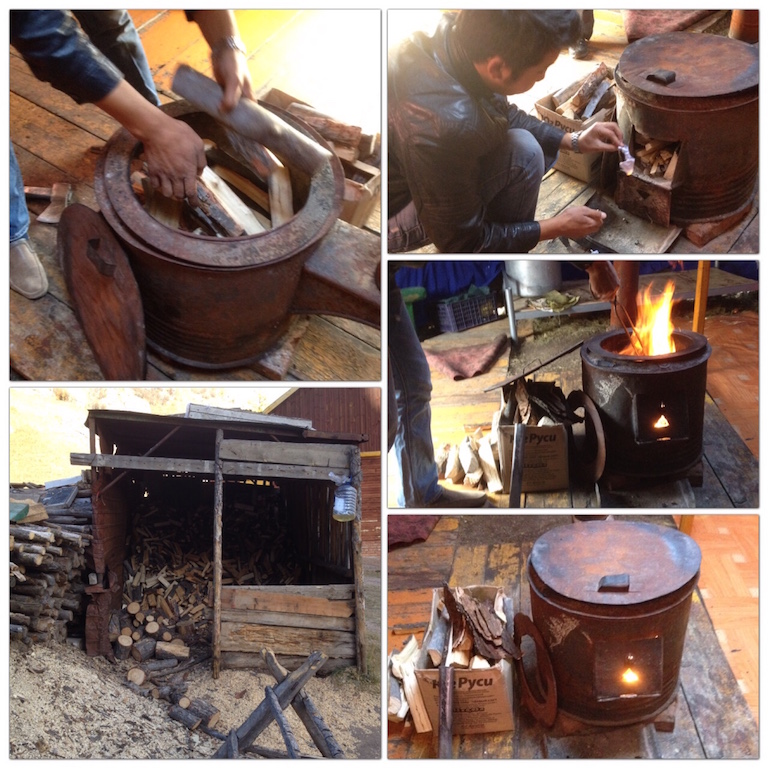 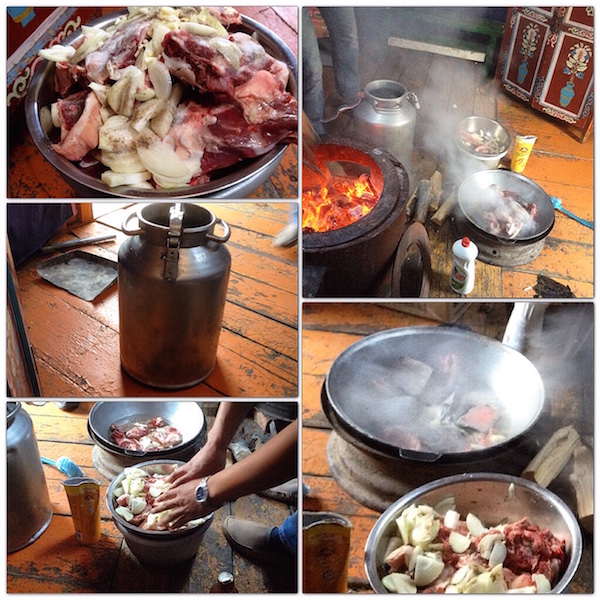 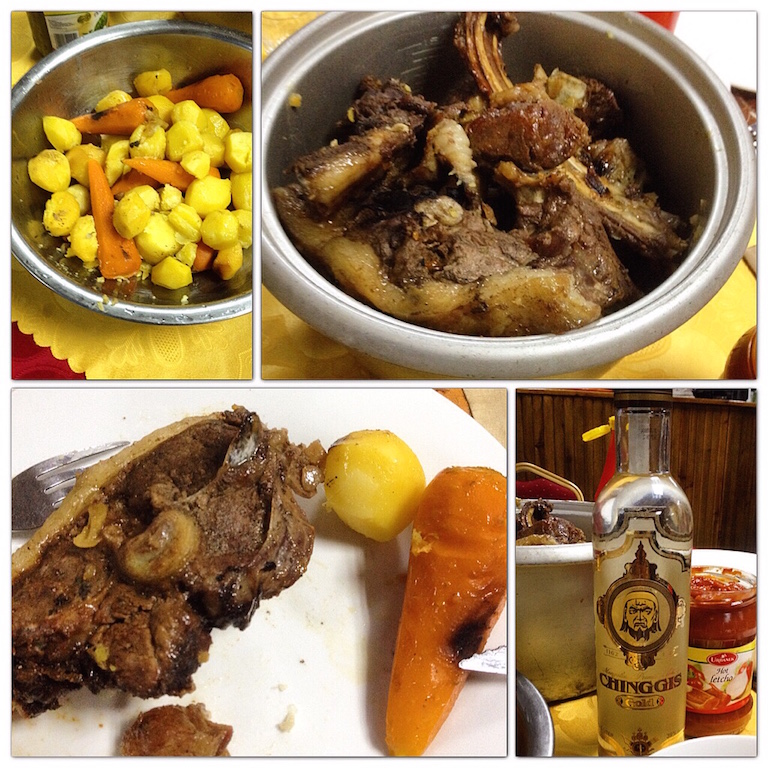 “Chinggis vodka is the best!” said Amran. I had no idea and I don’t like vodka. He meant it pairs well with khorkhog, the authentic Mongolian barbecue. All the fat from the sheep needs to be washed down with the high alcohol content of the Mongolian famous Chinggis vodka.

After dinner while we wandered around the dining room, we discovered free condoms placed behind the old TV. Very interesting discovery, I must say!

Mongolia is also known as The Land of the Horse. Horses are important for Mongolians since 3,000 years ago. Today, horses are still important to the Mongolians even if they are not herders. They rely on horses’ milk to make airag- the fermented horse milk. For nomadic families, children are taught to ride horses at the age of three. 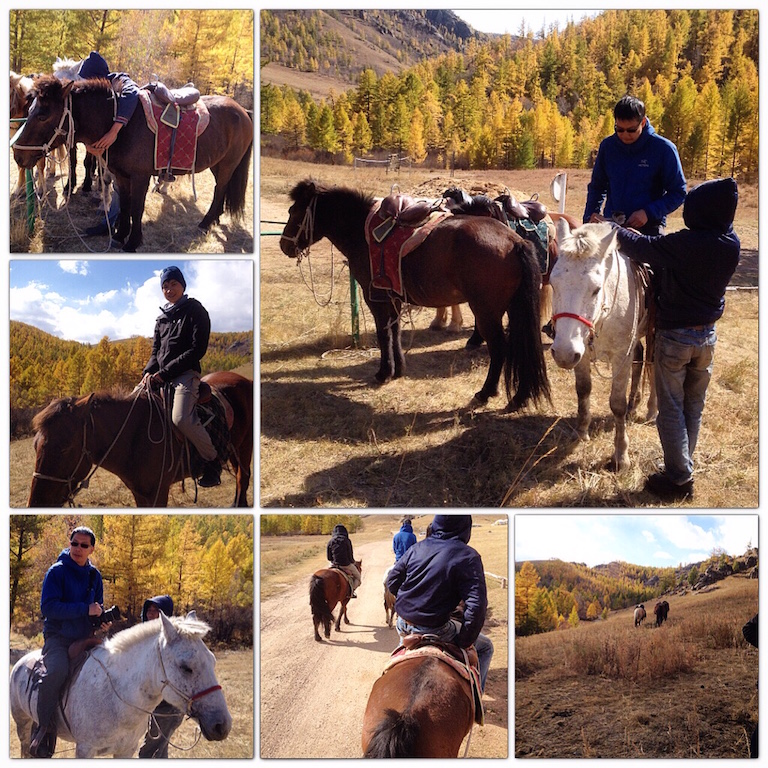 Mongol horses are small compared to American horses and Uruguayan horses. They have short legs and big heads. To experience the Mongol horse we hired a horseman to take us around the mountains near the ger camp for an hour. The horseman did not speak English but he spoke ‘horse language’ because he was skillful and knew exactly how to steer the horses away from falling into the valley.

Horseback riding was cheap at the ger camp at US$10 per person. 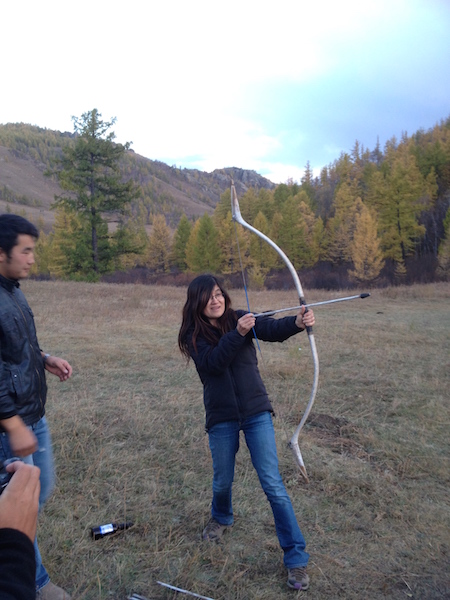 Archery is an important sport in Mongolia after horseback riding and wrestling. We tried archery using the bow and arrows from another tour group. 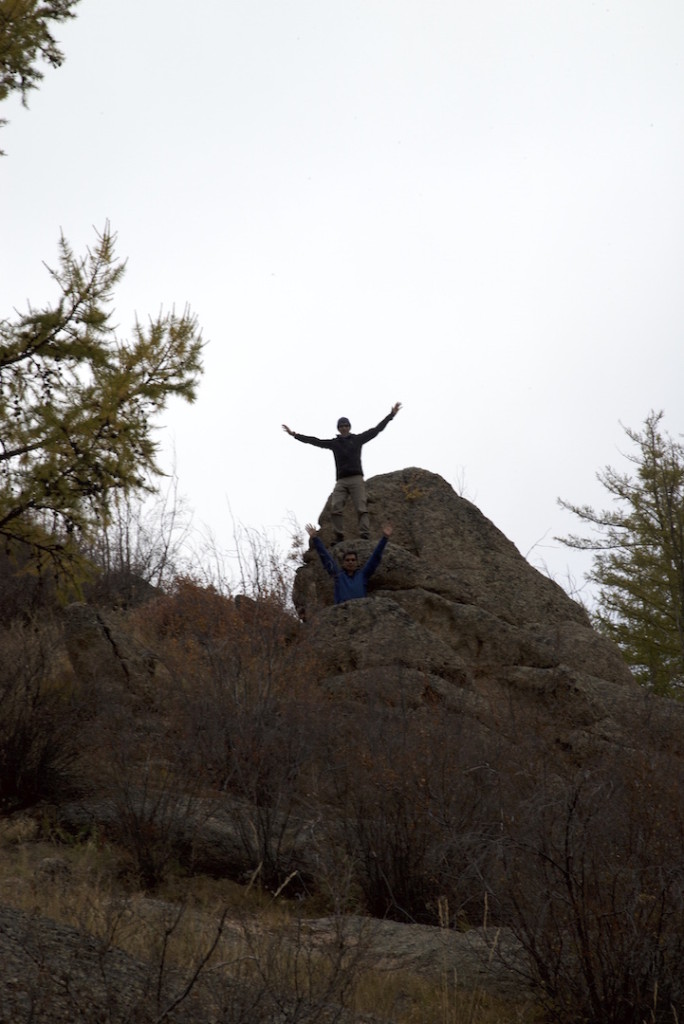 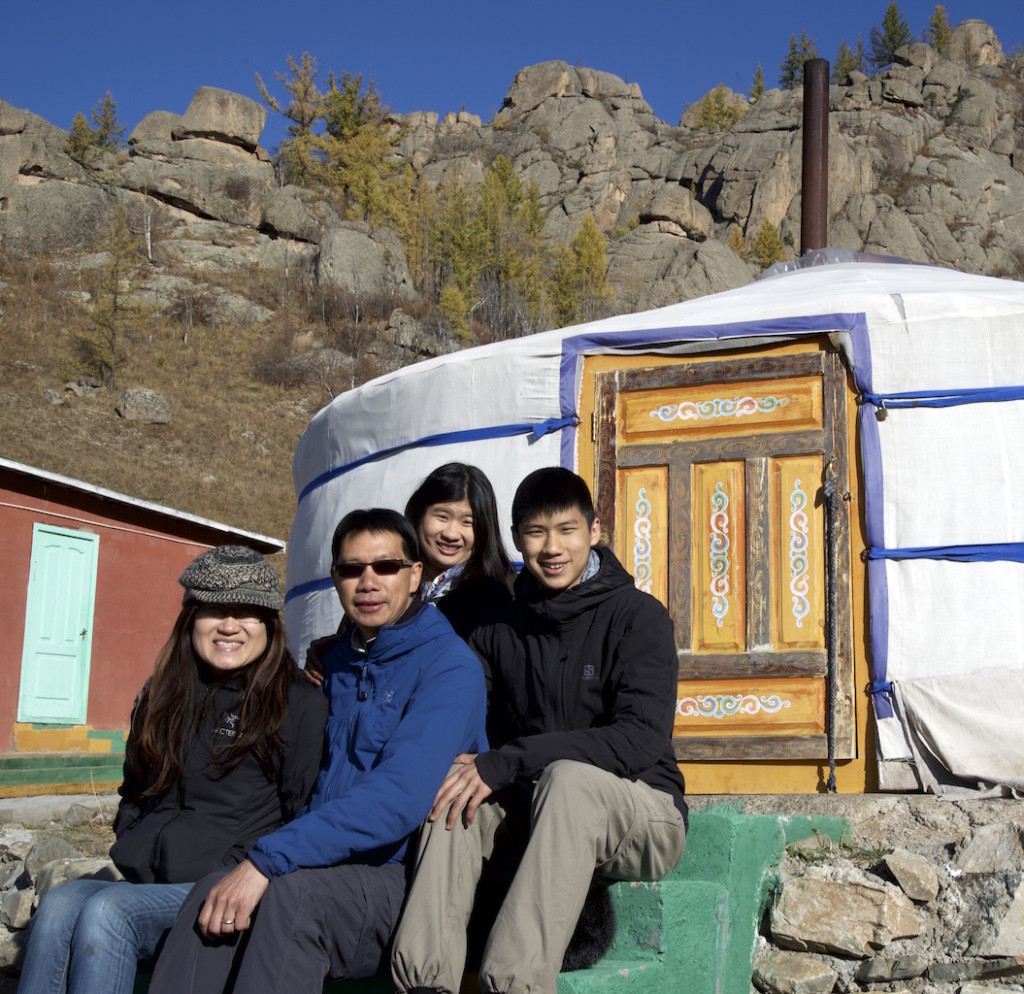 The two nights stay at the ger camp, meeting a nomadic family in their ger and eating real Mongolian barbecue were the best experiences I had in Mongolia.