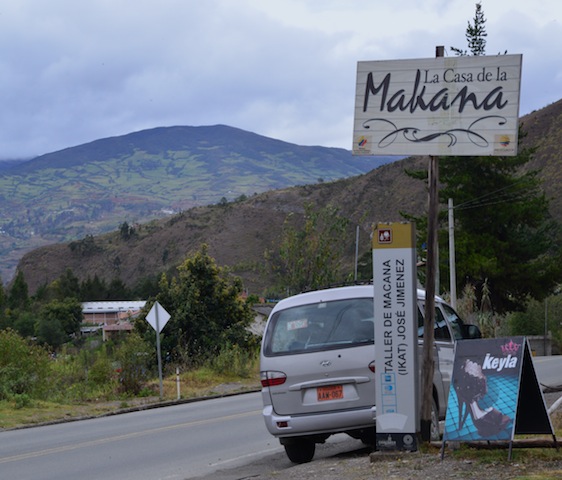 I grew up speaking the Malay/Indonesia language and the word “ikat” means to tie. When I read about the traditional ikat weaving workshop in Gualaceo I was excited to find out more.

Gualaceo is a town just one hour outside of Cuenca, well known for their ikat weaving, cheap shoes, orchid and pottery.

La Casa de la Makana belongs to José Jiménez and his wife Ana María Ulloa along the road just outside of Gualaceo. It is about a 45 minute drive from Cuenca.  The workshop is a two story house with an open area on the first floor where three workers were working hard with different machines. We were greeted by Ana because José was away on a business trip.

She was cooking in her open kitchen separate from the main house on the right. The aroma of her cooking filled the air as we were showed around the different machines and the process of ikat weaving by her son Ismail. Funny thing is Ismail is a common name in Malaysia.

I was beginning to think about the connections between the indigenous people of Malaysia's art of weaving and ikat weaving of Gualaceo. Are there any similarities? I’ve been to traditional batik workshops in Malaysia where every piece of material was uniquely produced. Each piece went through the process of wax blocking, dyeing, drying and boiling.

Our tour started with an introduction to a worker who was winding the white yarn with a traditional warping machine. She is the one who will determine the length and width of the makana (shawl). 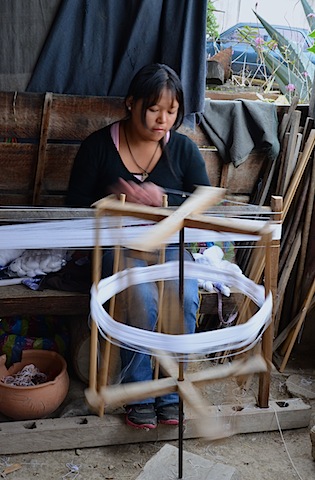 The next worker was focusing on wrapping or tying the yarn with a natural fiber from plants called penca. She had a pattern in her head because every wrap determines the pattern of the makana. The wrapped parts of the yarn will be undyed. It is a long and slow process. A more intricate design will require more time for wrapping. 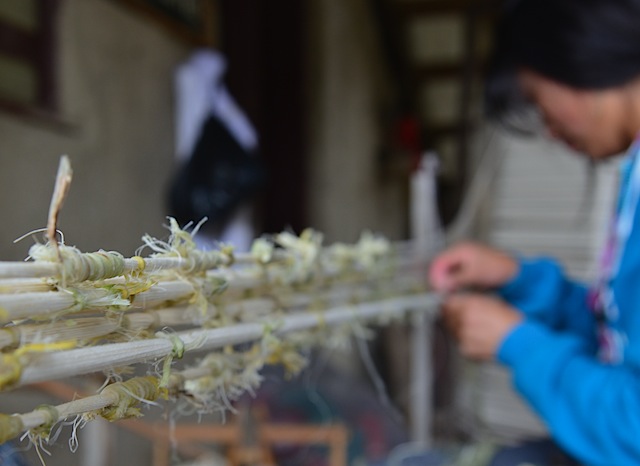 I think this is where the word ‘ikat’ originates. This is one of the oldest forms of tie dyeing in the world.

In the middle of the first floor were two old weaving machines. Ismail pointed to the 150 year old telar de pedal and there are less than five in Ecuador. 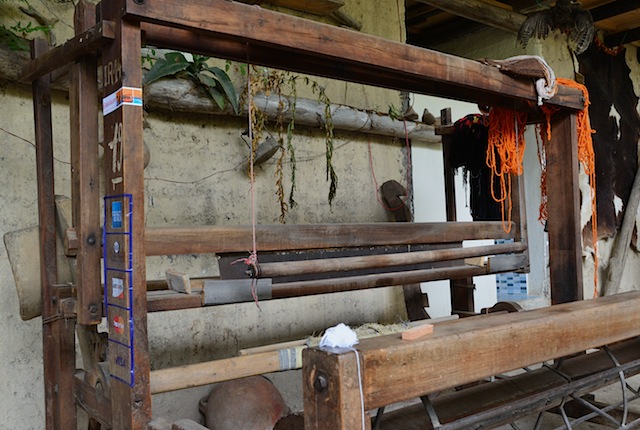 When asked how many ikat weavers are in Gualaceo, he said about 15 families and most of them are related to his family. They outsource some of the work to a few of these 15 families. 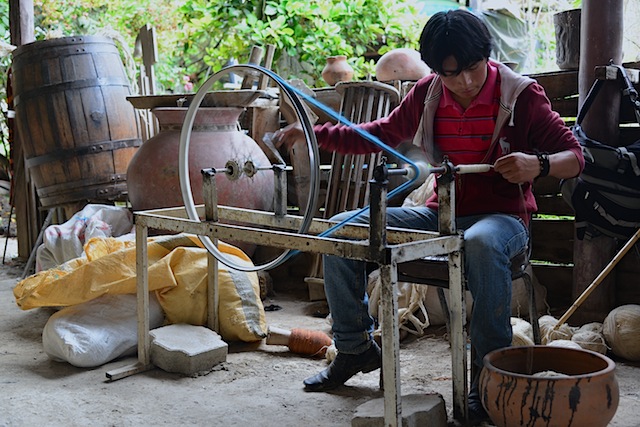 The dyeing process is another interesting area to watch and learn. The Jiménez family use only natural dyes from rocks, plants, nuts and worms. It was interesting to see how he used cochineal for dye as well. Only a month ago we were in Nazca Peru visiting the cactus plants that produce a type of worm for dyes called cochineal. Ismail showed the process of turning the natural red from cochineal to orange with lime juice and to purple with baking soda. 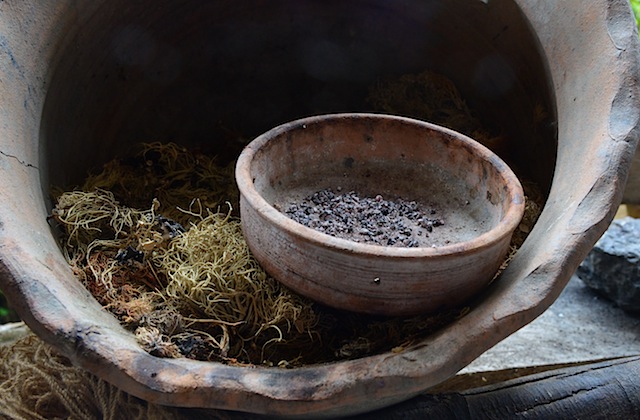 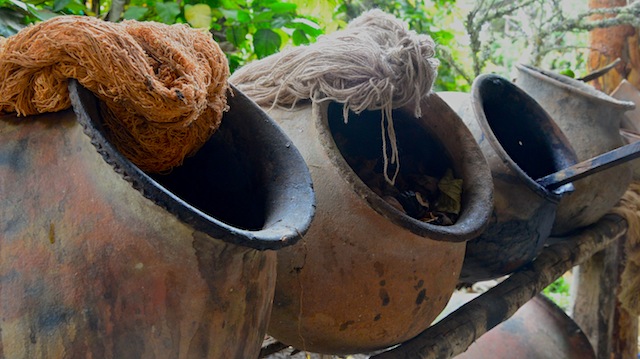 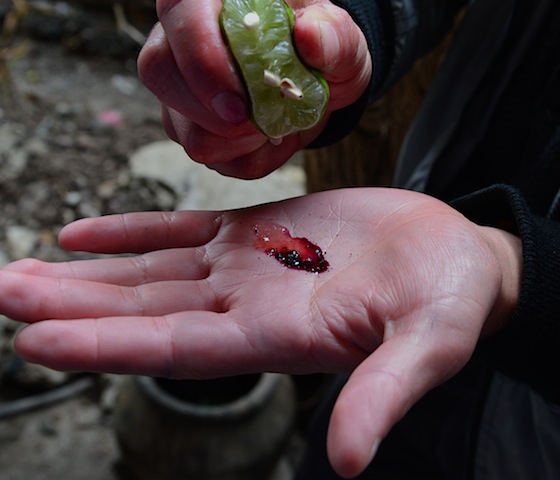 We walked up the stairs to the second floor of the workshop for the next few processes and the store. An Ecuador flag was fluttering as the wind blew and yellow yarn hung on a clothesline. On the wall was a photo of Ecuador’s President Rafael Correa. 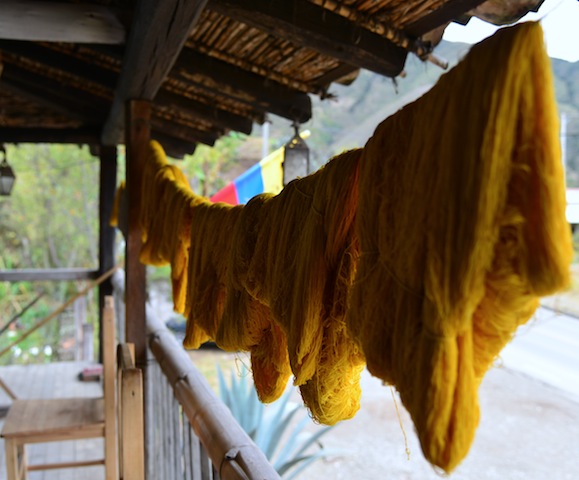 The President visited the workshop some years ago and was presented with a few pieces of makana including a tablecloth.

Ismail sat on the floor with a traditional backstrap loom strapped around his waist and his legs on the wood footrest. He demonstrated the weaving technique of tightening the warp. 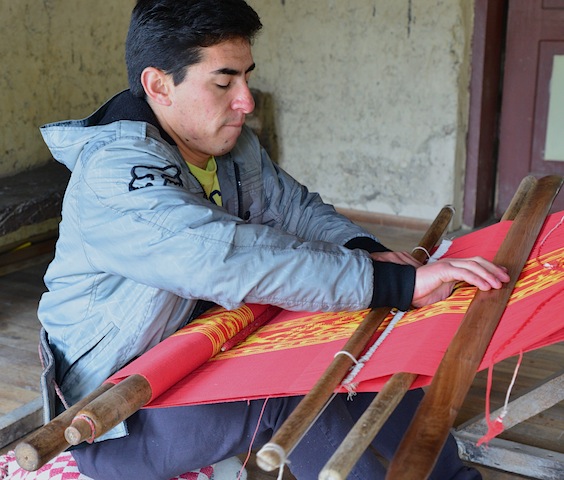 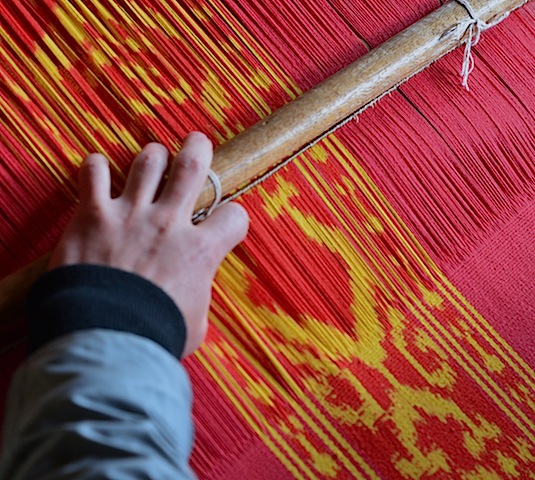 His sister was giving the final touches to some of the makana with traditional knotted fringe. 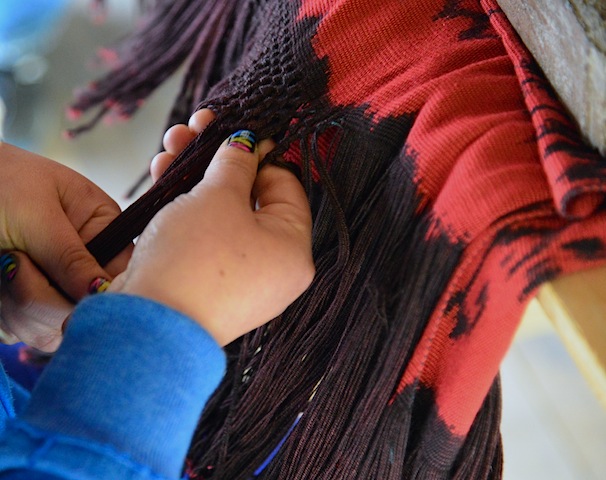 They have a small showroom of old shawls and some date back to 150 years old made by his great grandmother. They no longer make makana with these patterns because of the level of difficulty and the amount of time needed to make just one. There is no demand for this type of shawl these days. So it was not cost efficient to produce. 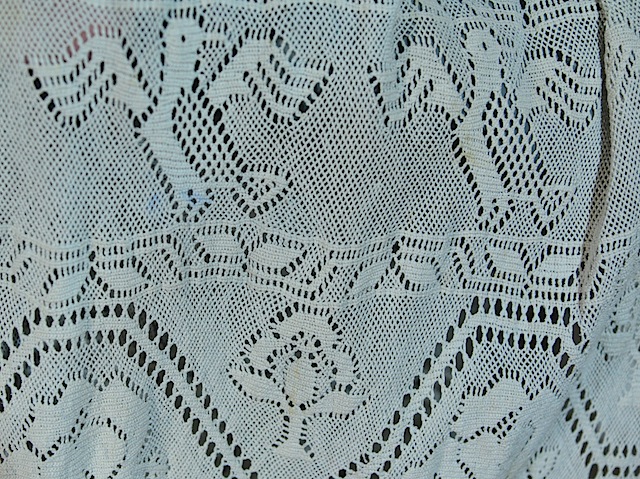 The only person who has the knowledge of this skill embroidery work is his mother, Ana. In the middle of the showroom is a table filled with makana for sale. The cheapest was US$25. There were vests, ties, bags, tablecloths, rugs and woolen ponchos for sale. 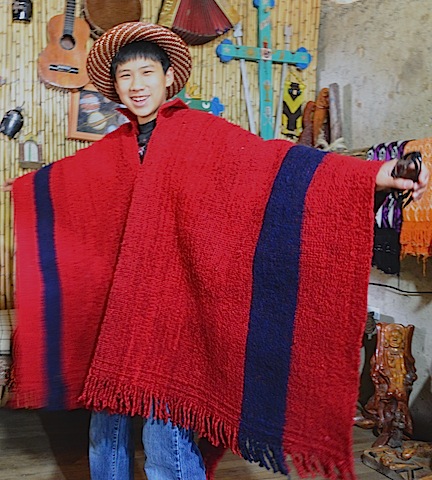 One of the reasons for the decline in ikat weaving is because there is less demand when modernization came to Gualaceo. The cholas and cholitas of the highlands are abandoning traditional clothing for the modern.

Folks who live in Gualaceo said many of their young men left town for the United States leaving behind their traditions. You have to go to more remote villages and find the cholas still wearing makana along with their Panama hats and traditional dresses.

We live in a culture of convenience and seeing the slow process of ikat weaving and the hard work of the men and women at La Casa de la Makana made me appreciate this art.