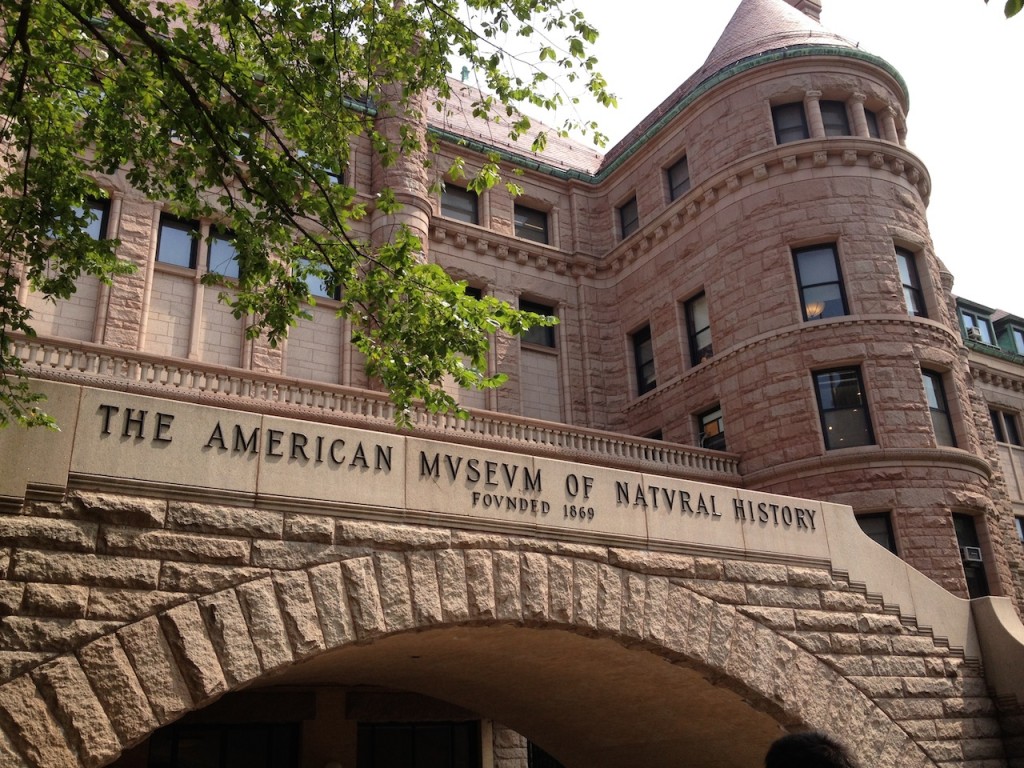 The American Museum of Natural History was overcrowded and swamped by school kids in every corner when we visited on a Friday. In fact there is never a day in summer when the museum is empty. 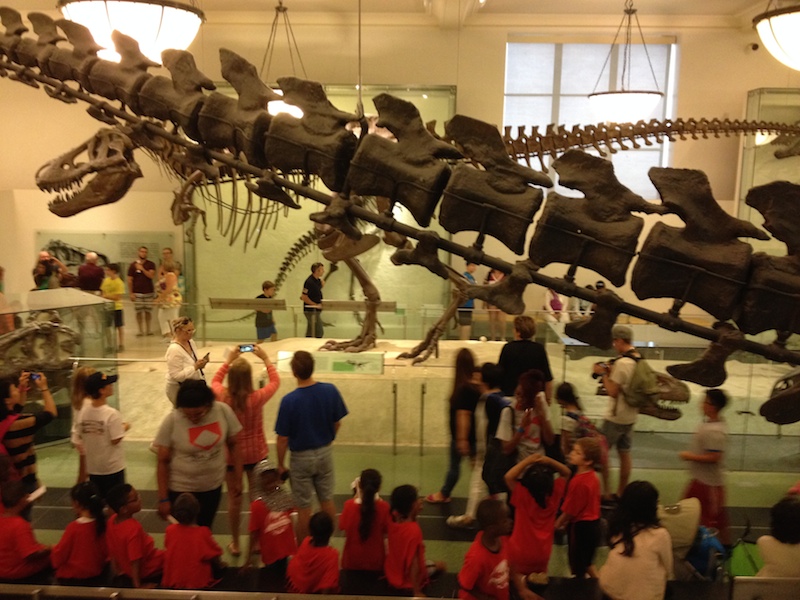 Patience and enthusiasm was the name of the game for my son and I as we stood and waited on the ticket line for almost one hour. The free Wi-Fi kept us occupied on the day when the museum organized the first adults-only sleepover at $375 per person.

There were only two exhibits that we were visiting – the Fourth Floor dinosaur exhibits and the Theodore Roosevelt Rotunda. We have learned it is better to focus on a few exhibits and make a museum trip short and sweet. No more cramming everything into a few hours and feeling overwhelmed- and remembering nothing or feeling frustrated.

In short, we were there to see American paleontologist Roy Chapman Andrews’ work and the iconic dinosaur in Theodore Roosevelt Rotunda.

Roy Chapman Andrews and his team discovered the first dinosaur eggs known to science in 1923. The eggs and dinosaur Protoceratops andrewsi (named in honor of Andrews) were on the Museum’s fourth floor. I call it the ‘real deal’ because most of the other exhibits are replicas. 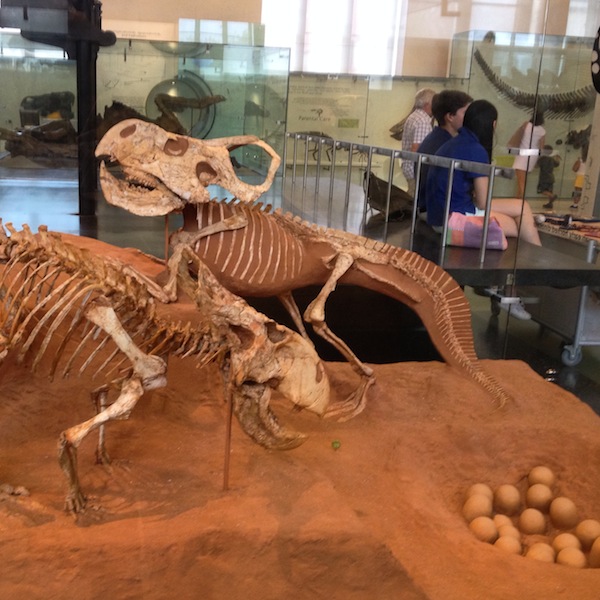 Andrews leads the historic Central Asiatic Expeditions through the Gobi desert of Mongolia from 1921-1930. They discovered some of the richest dinosaur fossil sites in the world.

The area was nicknamed  “Flaming Cliffs” because of the orange rocks, red sand and hot sun.  The Mongolians called it Bayanzag. The expeditions stopped in 1930 because of the political situation in the area.

The Theodore Roosevelt Rotunda is a grand space covering two stories and 5,200 square feet with the iconic dinosaur Barosaurus in the middle of the rotunda. It is one of the largest murals in a New York City public building with four large walls with quotes from Theodore Roosevelt’s writings. 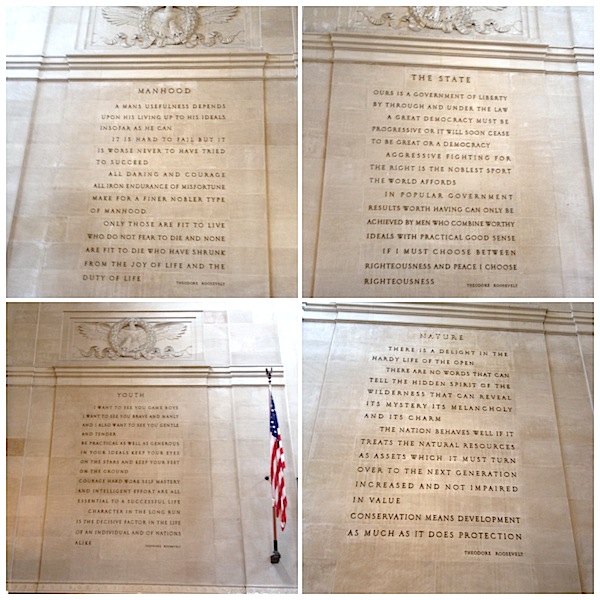 Theodore Roosevelt was a naturalist, conservationist, the governor of New York and the 26th president of the United States. He had the passion of preserving America’s wilderness for future generations and had a long association with the museum. 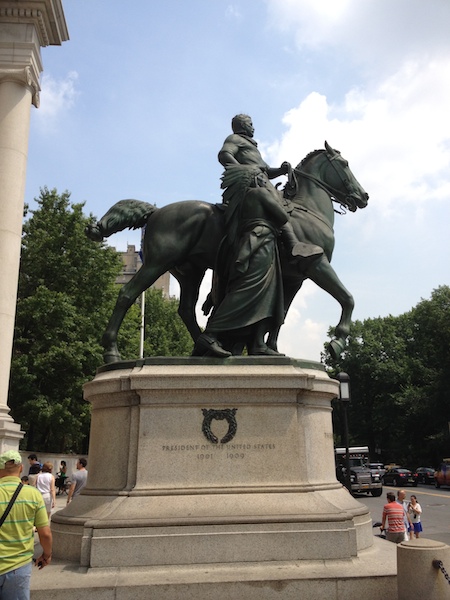 The American Museum of Natural History is located on Central Park West at 79th Street. Inside dining includes Museum Food Court, Café on One, Café on 4 and Starlight Café (limited days only). If you prefer faster food service head out to the main entrance and get chicken kebabs, hotdogs, lamb gyros, lamb on rice and more from the food trucks.

A lamb gyro and lamb on rice cost $14 and a 16 oz. water was $2. There are plenty of benches around the perimeter of Central Park West for a quick lunch. 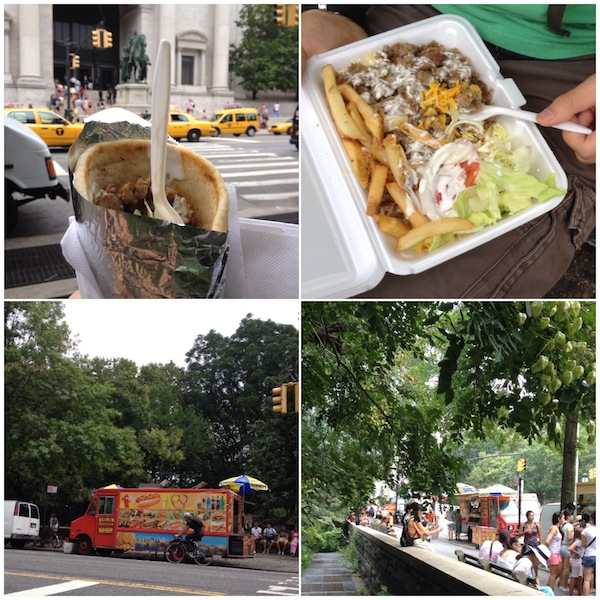 The American Museum of Natural History is a must-see museum in New York City because of its collections of fossils, dinosaur related educational materials and one of its kind exhibits in the world.