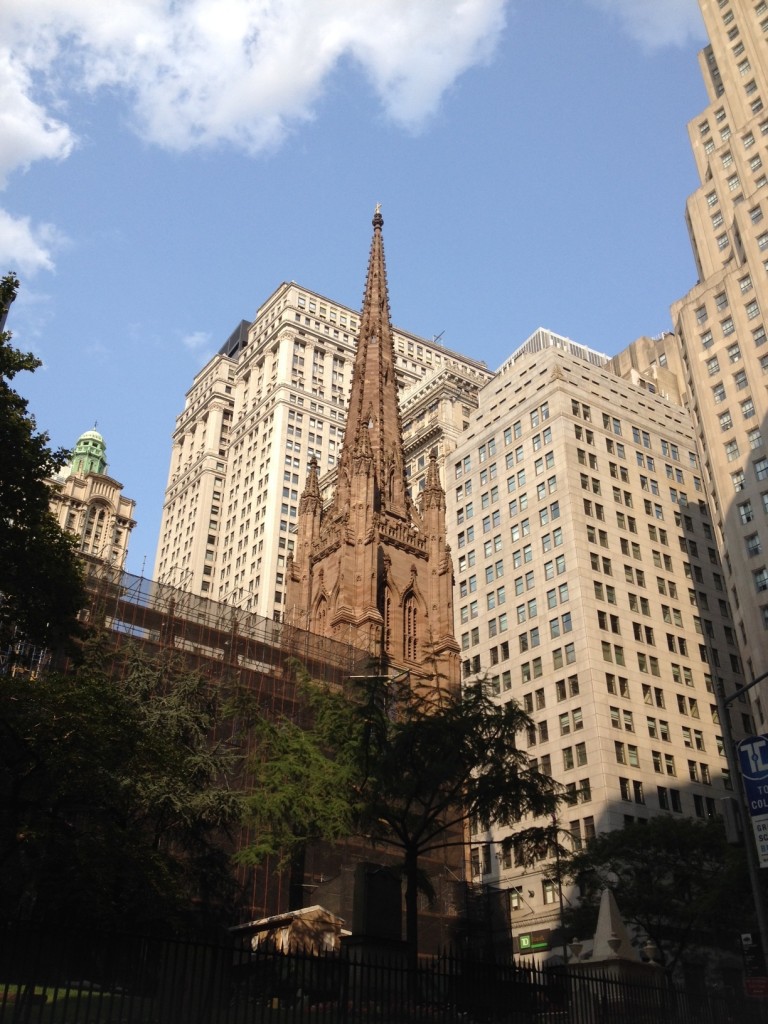 A walking tour of the Financial District is definitely the best introduction to New York City’s history. After all, this was the place where it all began for The Big Apple.

Our walking tour with The Big Onion Tour started at Alexander Hamilton’s tomb at Trinity Church. Ted, the guide who is also a graduate student said long before it was called The Big Apple, those who knew New York City called it “The Big Onion.”

So the story began with Alexander Hamilton, one of the Founding Fathers of America who died a tragic death at the age of 47 in the hands of his rival Aaron Burr. Alexander Hamilton was born illegitimate in the British West Indies, on the island of Nevis to a French woman and a Scottish father.

He was the United States’ first Secretary of Treasury. Raised by a single mother, Hamilton found his first job at age 11 and came to America at the age of 16 and was enrolled in Columbia University because of the generous gifts of Nicolas Cruger, his boss and Hugh Knox, a minister.

You can find his image on your $10 bill. 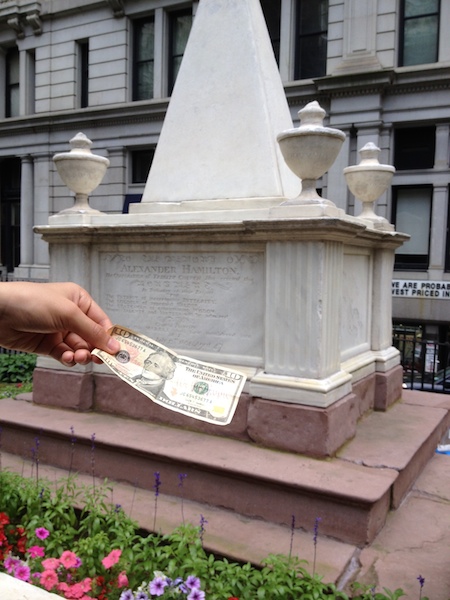 Alexander Hamilton and Robert Fulton are among the famous people in New York City buried in Trinity Church’s churchyard. Since 911, one important memorable piece has been added to the church, that is Trinity Root by Steven Tobin. This is a sculpture inspired by a large sycamore tree that was destroyed in the churchyard of St. Paul’s Chapel, a church a few blocks from the World Trade Center.

This 15 feet high x20 feet wide structure was once a half a century old sycamore tree. According to the sign, when Philadelphia-born artist Steve Tobin heard of how this root was fallen in such a way that it protected the historic tombstones, he had a vision to use the roots for a bronze sculpture. 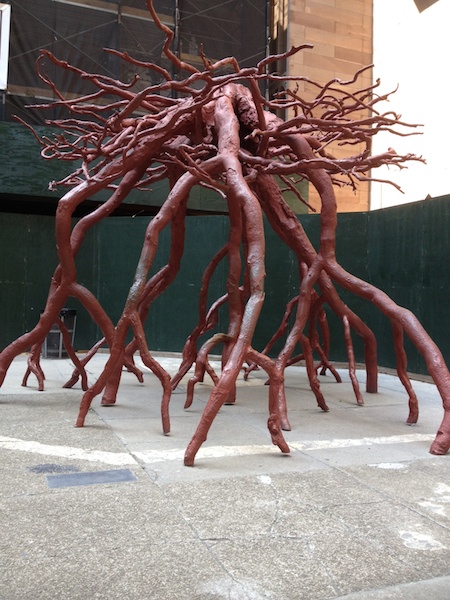 It is a metaphor for connectedness and strength- a memorial to 911 and the characteristics of New York City.

As we walked down Broadway from Trinity Church towards the National Museum of the American Indian and Bowling Green Park, Ted pointed out the engravings on the sidewalk commemorating the ticker-tape parades held on Broadway since the late 1800s. 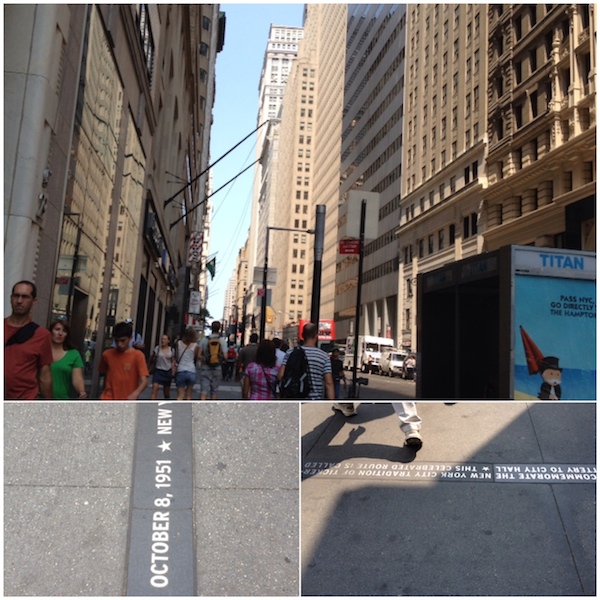 We walked passed The Charging Bull right in front of the Cunard Building. This over 7,000 pound bronze Financial District icon depicts prosperity and the bull market.

Crowd at the charging bull sculpture

The US Custom House is now the National Museum of the American Indian. In front of the old custom house is the oldest park in New York City – Bowling Green. Bowling Green still has the original 1771 fence. In its earlier days King George III statue was erected but was taken down and melted by the colonists to make bullets when the Declaration of Independence was read. Ted, the guide said you could find an illustrated picture of the pulling down of King George III statue at the Museum of the City of New York. 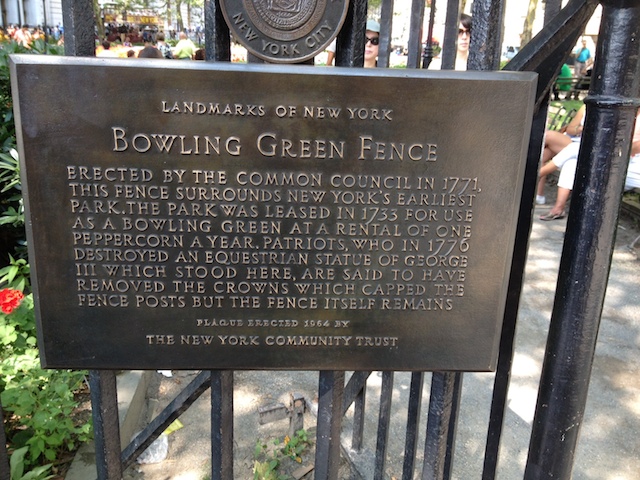 Manhattan was sold for $24 in bartered goods in 1626 when Peter Minuit bought it from the Algonquin Indians. Today the custom house is converted into a Native American Museum and it was pointed out to us a sign on the right (from Bowling Green Park) read “Bankruptcy Court.”

Four grand statues depicting the continents of Asia, Americas, Europe and Africa flanked the front of the Gothic revival style US Custom House. Each of these statues has a story of its own according to the sculptor Daniel Chester French.

After Bowling Green Park we walked to Pearl Street. This is where you will find the five oldest buildings in the Financial District. Fire had gutted many houses and buildings in the area. The most famous building is 54 Pearl Street – Fraunces Tavern Museum and Restaurant. 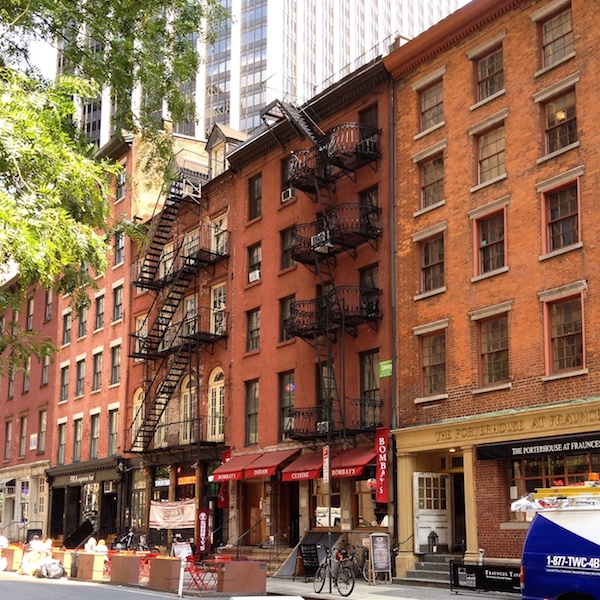 I was a bit stunned to find out about the old Goldman Sachs building built on a historical site. It was the site of the first New York City’s city hall- Stadt Huys, which later was replaced by an English tavern in 1670.

You can view the remains of Governor Francis Lovelace’s tavern, an 18th century cistern and if you are there during business hours, you can ask the security desk for permission to enter the building and view the path of the former bed of Stone Street. 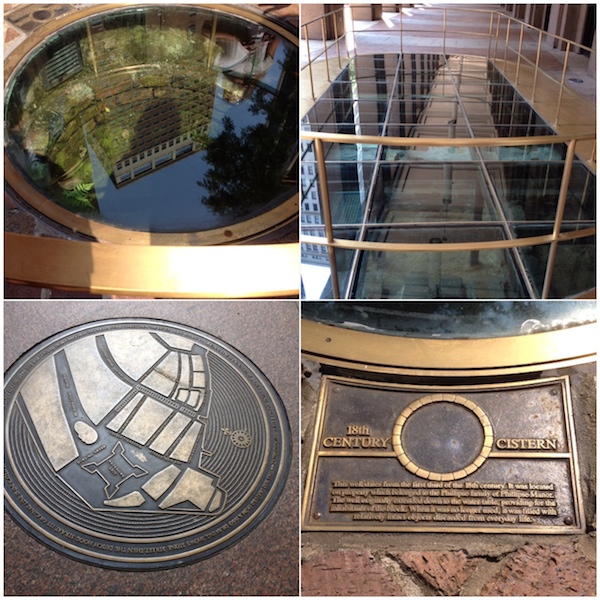 In front of the large empty building is a narrow cobblestone walkway, the first paved cobblestone street in New York City called Stone Street. Now it serves as an open air dining area for New Yorkers. 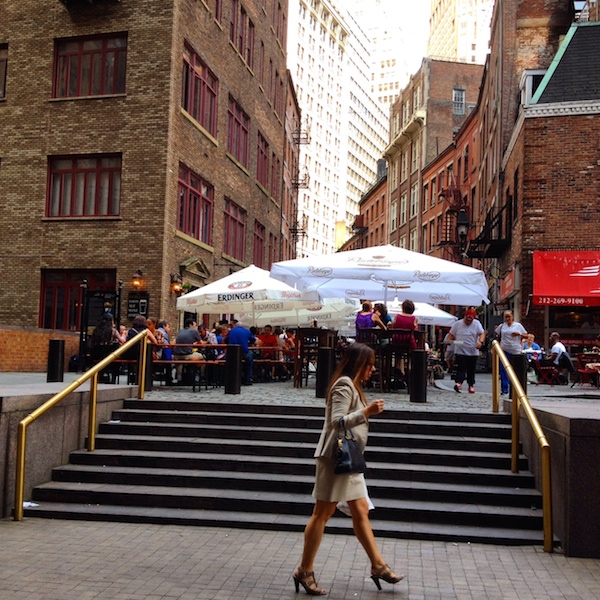 I wonder, what if that building was never erected on Stone Street?

Just a few steps away is the narrow Williams Street. This is where Dutch and English inspired buildings were reconstructed side by side. 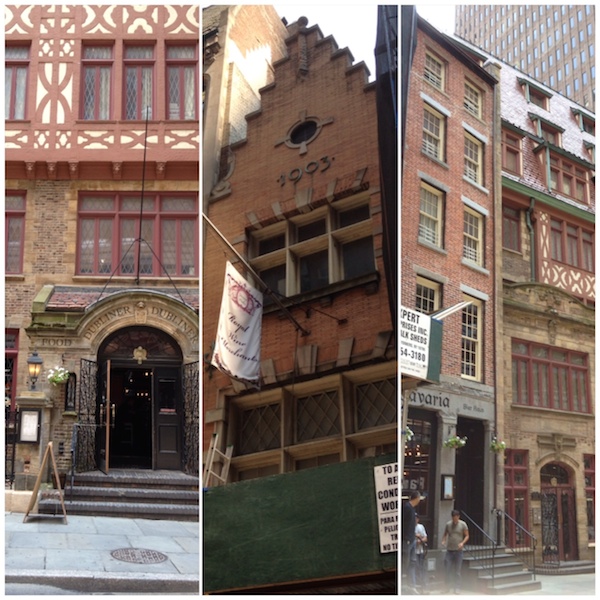 On Beaver Street is New York City’s first restaurant started by two Swiss brothers, Giovanni and Pietro Delmonico. The Delmonico’s Restaurant was the first full fledged a-la carte restaurant in New York City, a far cry from the taverns and oyster cellars in 1825.

The Erie Canal was completed at that time and it brought more prosperity to New York City. Delmonico’s was there at the right time to serve the wealthy New Yorkers. Ted the guide said Victoria Woodhull was one of the famous women who dined regularly in Delmonico’s.  Read more here. 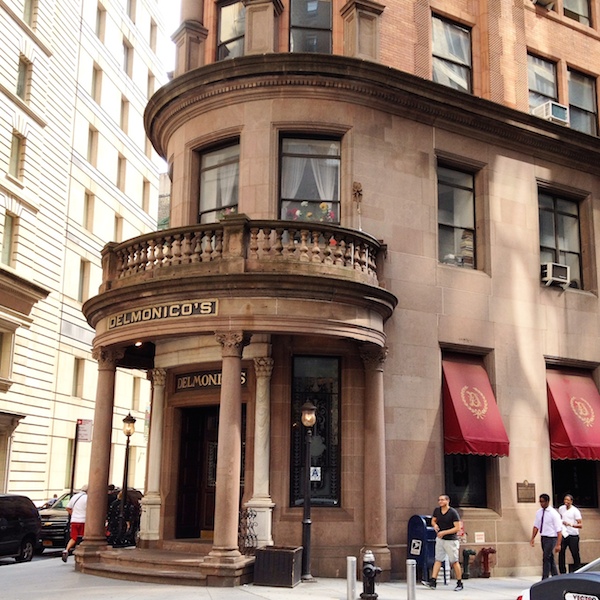 Another building that has neoclassical columns and Greek Revival style is 55 Wall Street, the original Merchant Exchange. This majestic building built in 1842 is the oldest on Wall Street. It is no longer a bank. It houses Cipriani Ballroom and luxury apartments.

On Wall Street you can still see the wooden posts on the cobblestone street. The Dutch built a wooden palisade to protect the colony from attackers. This street ends at Trinity Church. 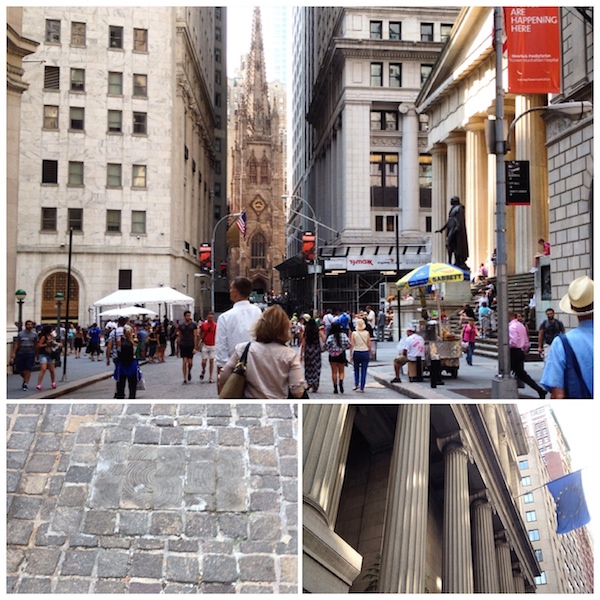 40 Wall Street is a story of rivalry between two former business partners. 40 Wall Street was the tallest building for four days when it lost its reign to Chrysler Building.

At the intersection of 23 Wall Street and Broad Street is the JP Morgan Building. You can still see the pockmarks of the 1920 bombings on JP Morgan’s building wall facing Wall Street.

September 16, 1920 bomb explosion killed more than 30 people, one of the worst disasters in the United States before 911. JP Morgan was one of the richest men in America and was responsible in bailing out America in 1907.

The Federal Hall National Memorial’s interior looks like a replica of the Pantheon in Rome. Inside, the guide pointed out the indented marble floor surrounding the round custom desk (not there now) in the middle of the room.

The building was used as a custom house for nine years. The indented floor shows the foot traffic in the building particularly where clients were standing around the circular area. Congress used to meet in the building when New York was the nation’s capital.

While at the New York Stock Exchange, look for the sycamore tree on the right (when you are facing the NYSE). Currently the tree is small because they are being replaced every six years.

The sycamore tree is an important symbol for NYSE because on May 17, 1792, 24 brokers gathered under a sycamore also known as buttonwood tree on 68 Wall Street to trade for the first time. Thus the Buttonwood Tree Agreement was started. 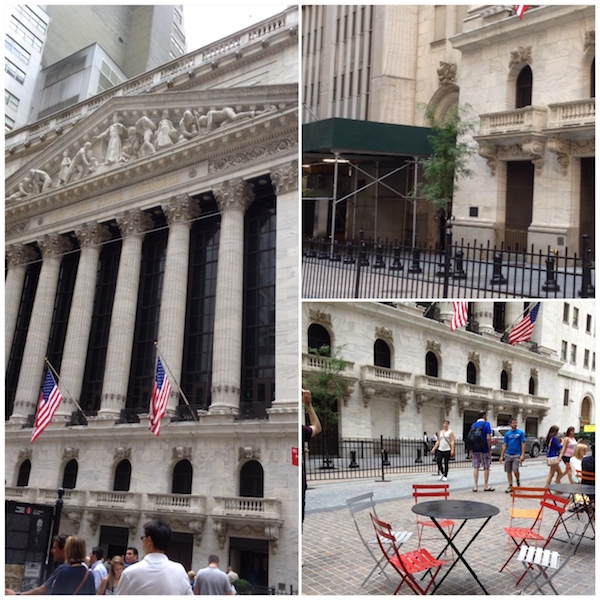 This is a young sycamore tree in front of New York Stock Exchange.

I wouldn’t have known all these facts if I have not taken a Financial District Walking Tour with the Big Onion Tours. They have the most knowledgeable guides in New York City.

My son and I left with more appreciation of the Financial District. We learned about the American Venus- Audrey Munson- the most sculptured woman in New York City. Ted, the guide said she is the Spirit of Commerce on Manhattan Bridge, Pulitzer Fountain, Columbia Triumphant in Columbus Circle, Straus Park, The U.S. Custom House and more.

The only way to know New York City better is to go on a walking tour with a guide who understands the culture and studies the history of the city - where you could peel through layers upon layers of mysteries behind the city that is "New York, New York. A city so great they named it twice."

Disclaimer: My son and I were guests of The Big Onion Tours and NYCGO. For more information about The Big Onions Walking Tours, please go to their website.