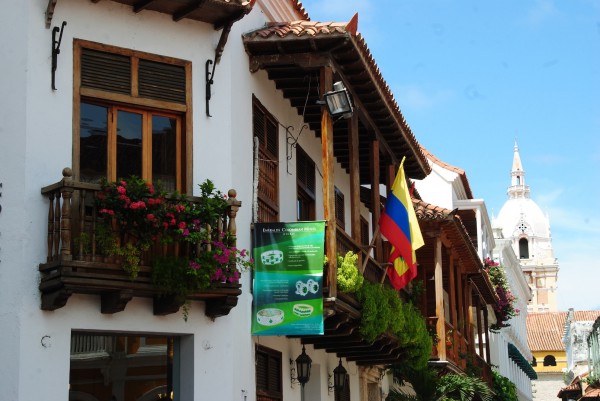 Cartagena was scorching hot. From the moment we stepped out of the tour bus, the sun greeted us with intensity. The locals will gladly tell you it was just a normal day. Unlike any Caribbean ports of call, Cartagena holds over 9 million people and has a combination of rich colonial history that dates back to the 1500s, a fairytale city of legends, wars, romances and chaos.Outside the walls of the Old Town, motorbikes, Japanese made cars and buses were rushing through and going about with life. The tour guide pointed out that most of the motorbikes are actually for hire, in other words, they functioned as taxis. 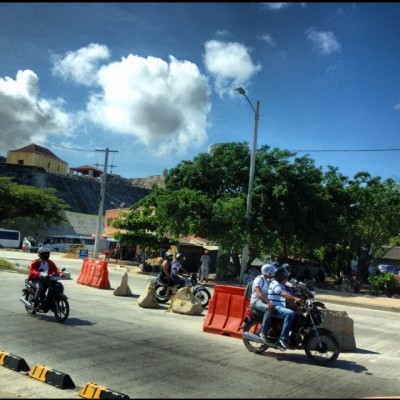 The contrast of Old Town with the new is obvious once you see the old colonial wall built in the 1500s. It is also one of UNESCO World Heritage site. The river that separates the Old Town from the Getsemani (the outer wall) was filled up because the stagnant water yielded too many harmful bugs. Now, it’s a street filled with vehicles and where the Parque del Centenario is built right opposite the main entrance to the Old Town. 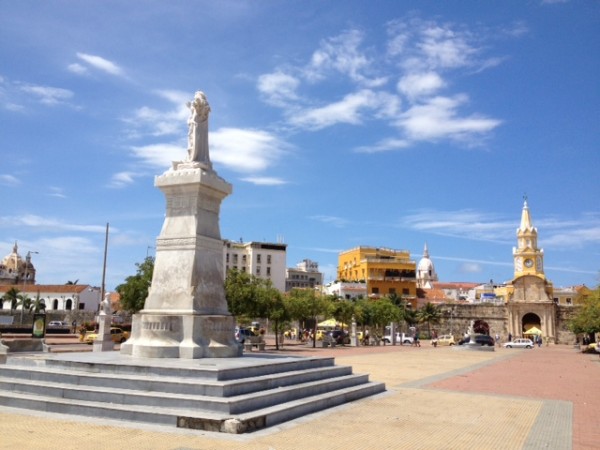 Upon stepping into the gateway of Puerta del Reloj, we were mesmerized by Cartagena. This is the main entrance to Old Town Cartagena and once had a drawbridge over the river (has been filled). Something within me wanted to see the moat and drawbridge of the past.As we entered through Puerta del Reloj, the old stonewalled city came alive with colorful old buildings, wooden balconies, bougainvillea covering balconies and walls, statues, cobbled alleys, cobbled square, churches, plazas, music and the Hard Rock Café. All were very well preserved and absolutely impressive for a history buff. 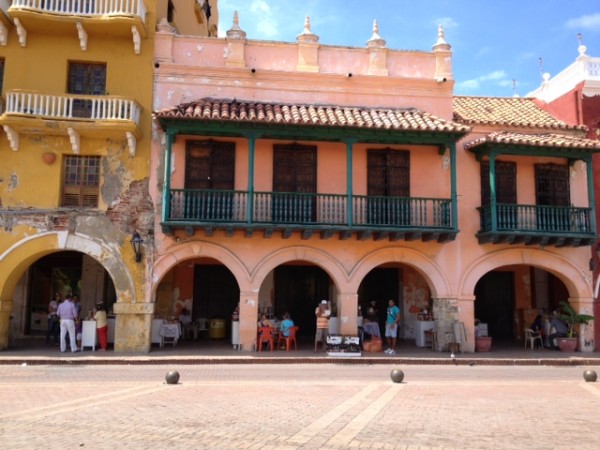 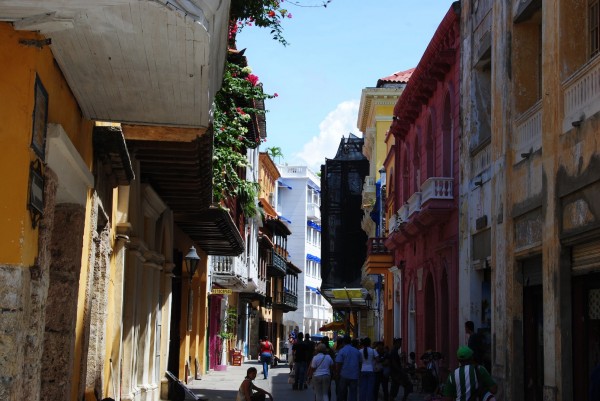 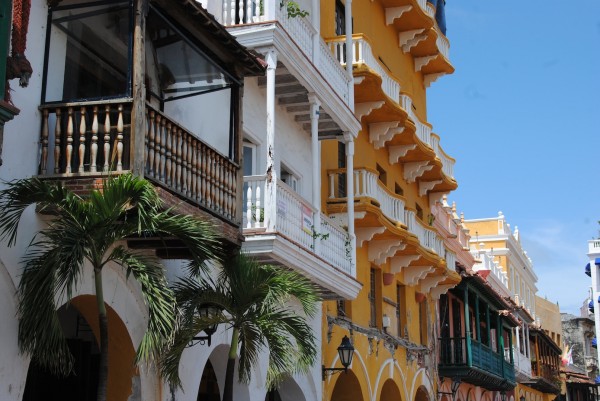 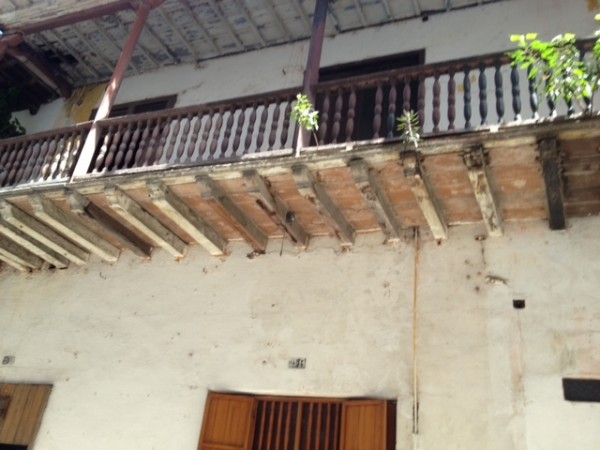 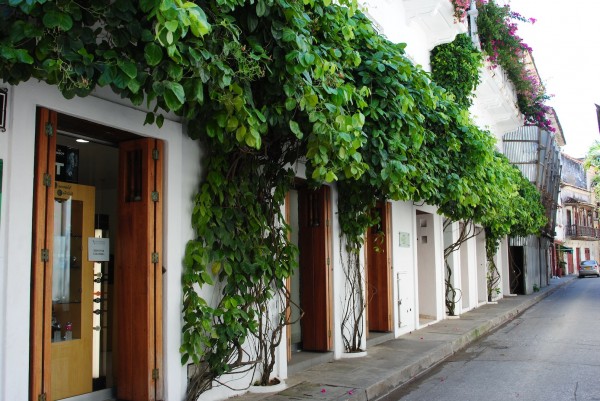 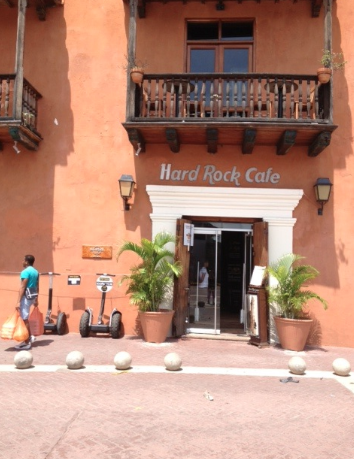 The heat was on…. totally unbearable even though we have lived in humid and sunny Florida for eight years. There were air-conditioned and open-air cafes serving cold and hot drinks. Vendors with fresh fruits sitting in a corner with pigeons feasting the crumbs and pushcarts filled with iced cold soft drinks and bottled water were scenes to behold. 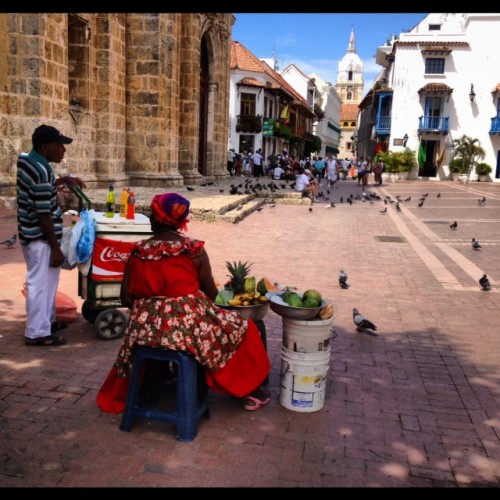 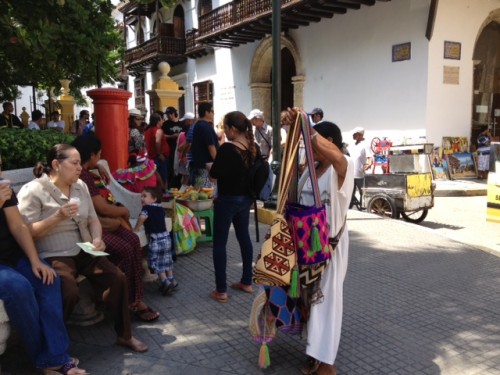 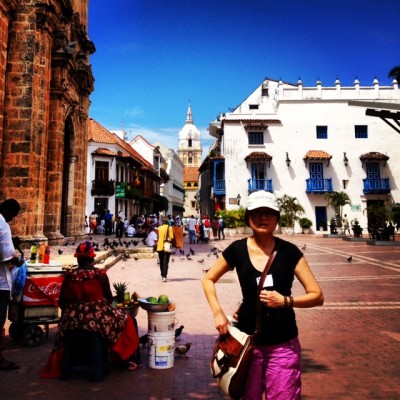 Old Town Cartagena impresses upon me and drew me to want to go back one day for more. But would the heat stop me?Pedro de Heredia founded Cartagena, which was to become the main port to South America from the Caribbean. Emerald and gold were shipped from Cartagena to the outside world and soon the Pirates of the Caribbean heard about the treasures. Needless to say, it became a place to be and soon pirate’s attacks were becoming a huge problem.

Las Murallas, the wall and fort were constructed to protect the city from the enemies at the end of the 1500s. We took sometime to explore Iglesia de San Pedro Claver which will be posted next. 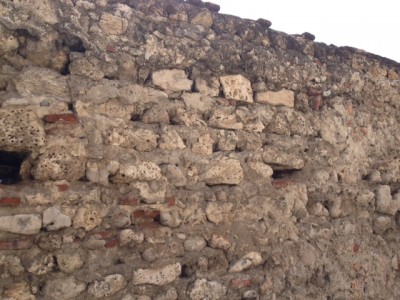 The architecture, history, street life and color of Old Town Cartagena without a doubt had been one of the best places I’ve seen lately. I am excited about visiting South America for nine months next year. Cartagena was a great introduction and gateway to South America for me.
I wonder if the rest of the cities and places in the continent will leave me in awe of the creativity of God and the intellect of mankind?