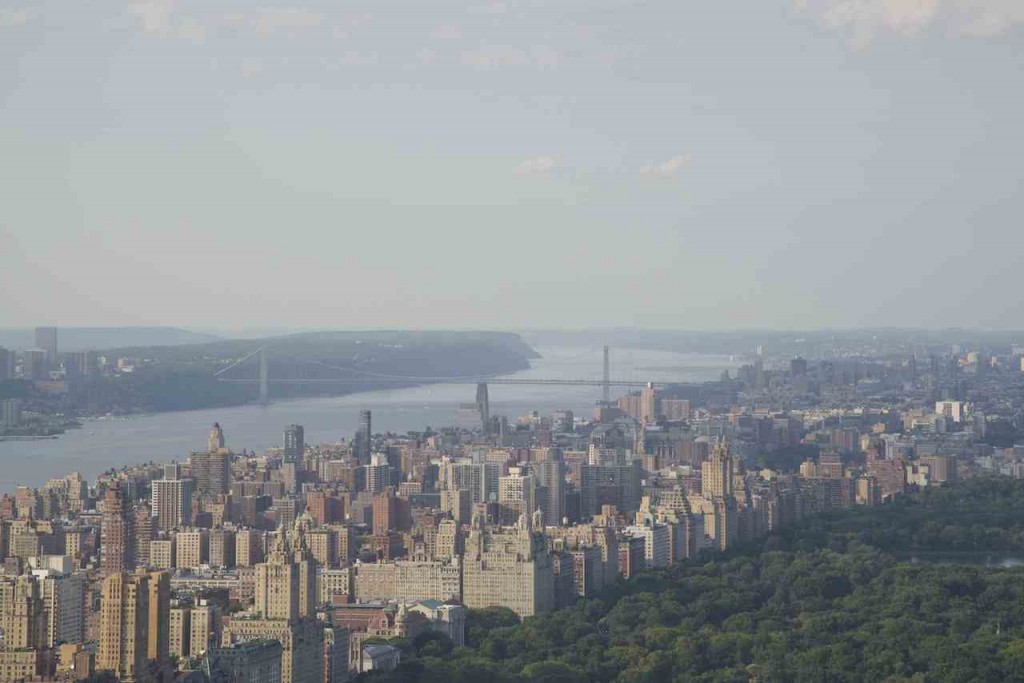 If you have limited time and want to view the Manhattan’s skyline, I recommend going to the Top of The Rock. At the top you will see the iconic Empire State Building, Central Park, uptown, downtown, the rivers and as far as New Jersey.

So if you are like me and if you love to view the Empire State Building from every possible angle in the city, Top of the Rock offers the best. The best time to go is just before sunset.

The security check-in at the entrance to the Top of the Rock looked sterile accept for the crystal chandelier hanging from the over 20 foot ceiling. Men and women in suits and walkie-talkies were directing visitors to the security check-in area making me feel as if I was at the airport.

After going through security, we were directed to the Mezzanine level to wait in line for an optional photo shoot and to take the elevators to the observation decks. The iconic Men on Beam image hung on top of the official photographers. Photos are not allowed there.

A Little History of The Rockefeller Center

The Men on Beam image showing 11 workers eating lunch on a beam atop Manhattan skyline was taken during the constructions of The Rockefeller Center. Rockefeller Center was built during the Depression. A highly publicized picture of a man trying to sell his vehicle was among many photos along the wall in the waiting room. The photo said: $100 WILL BUY THIS CAR MUST HAVE CASH. LOST ALL ON THE STOCK MARKET. 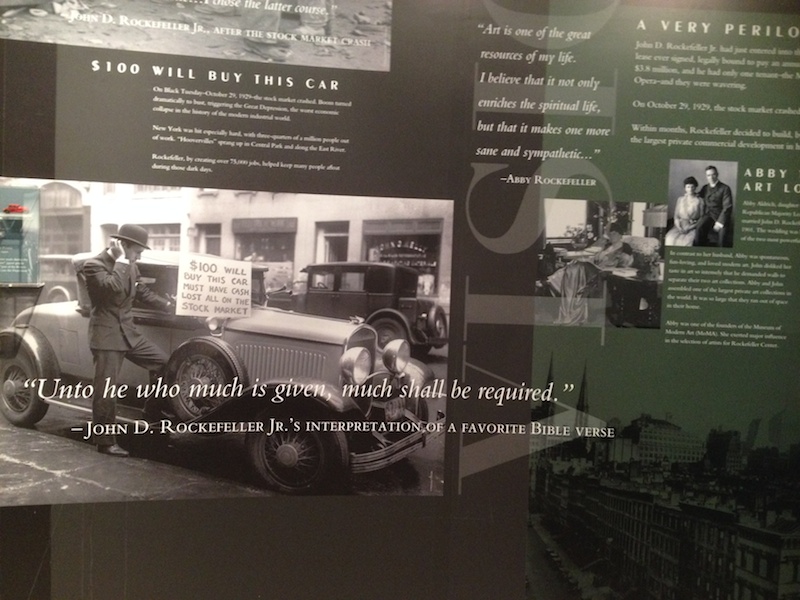 After going through the photo taking line, there is a 5-minute clip on the history of Rockefeller Center. After this room we were shown to the elevators. There were two long lines forming just outside two elevator entrances. They moved rather quickly. The whole waiting time for our 5:30 p.m. viewing time was less than half an hour.

The 43-second elevator ride to the 67th floor was filled with sound and light effects. 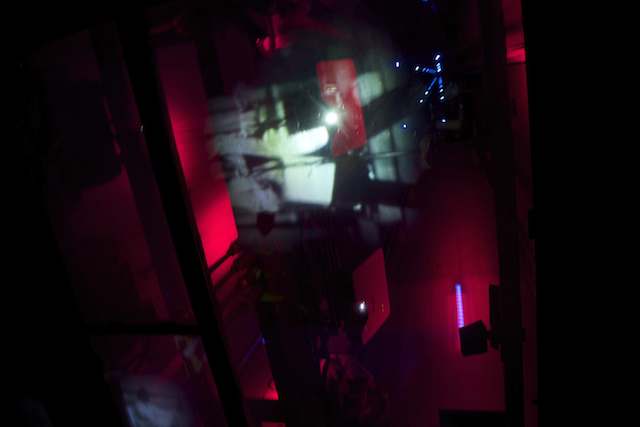 Top of the Rock has three viewing decks with unobstructed views of the city. The best place to hang out is the 70th floor, open deck. We chose the area facing the Empire State Building for the sunset and night view. 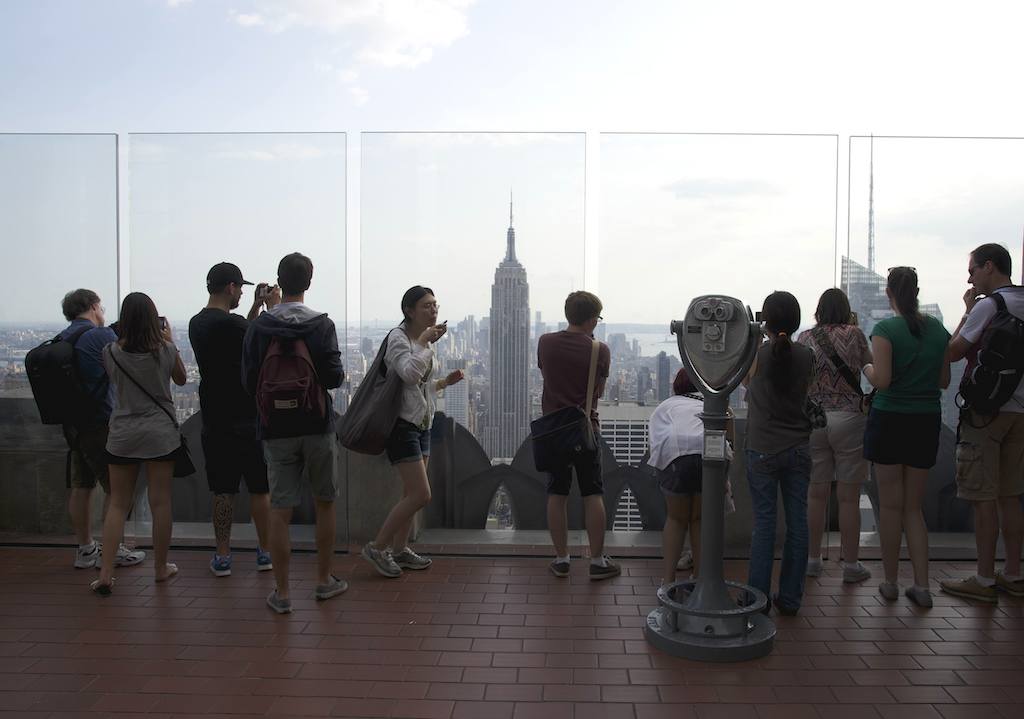 Take a look at the changing scene of the area surrounding the Empire State Building. We sat at the same spot for two hours. There is no time limit at the viewing decks. You can stay as long or as short as you like. For those who want to save money but want to have the best of both daylight and night views, go just before sunset and stay until it turns dark. 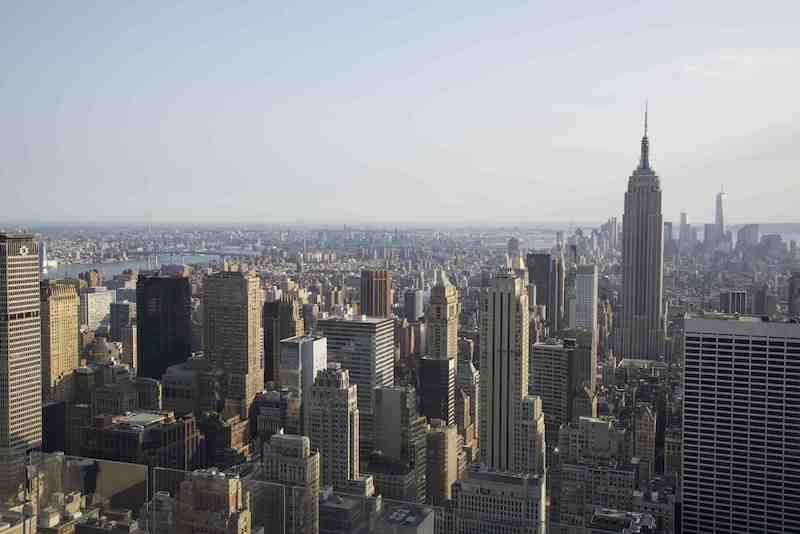 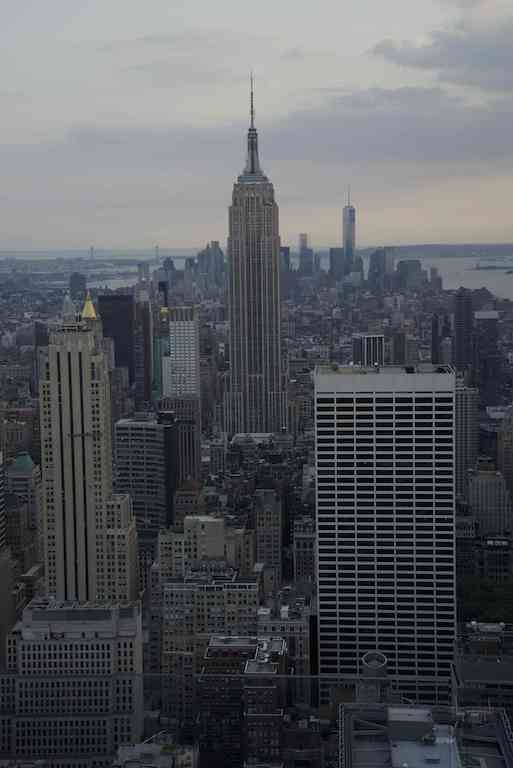 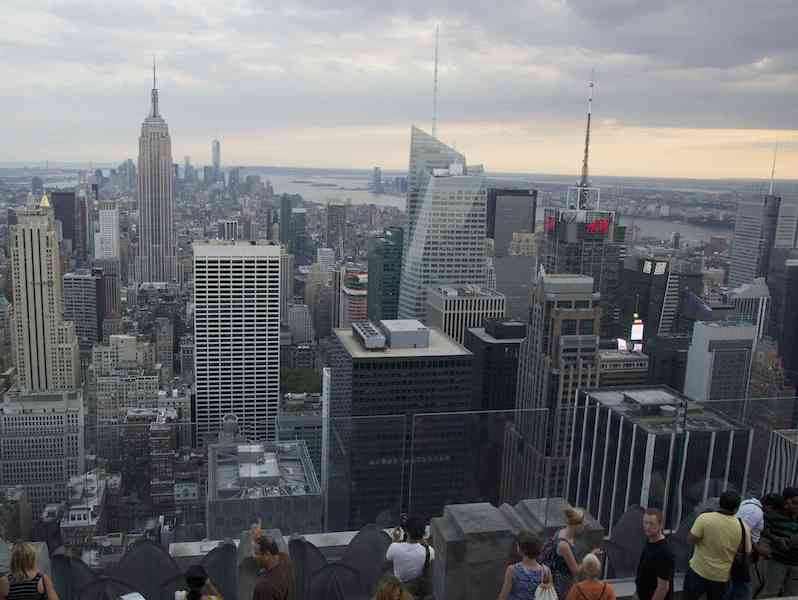 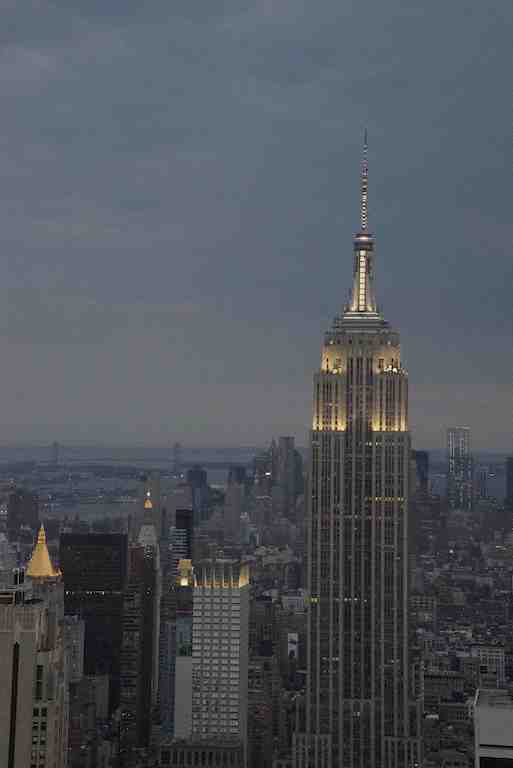 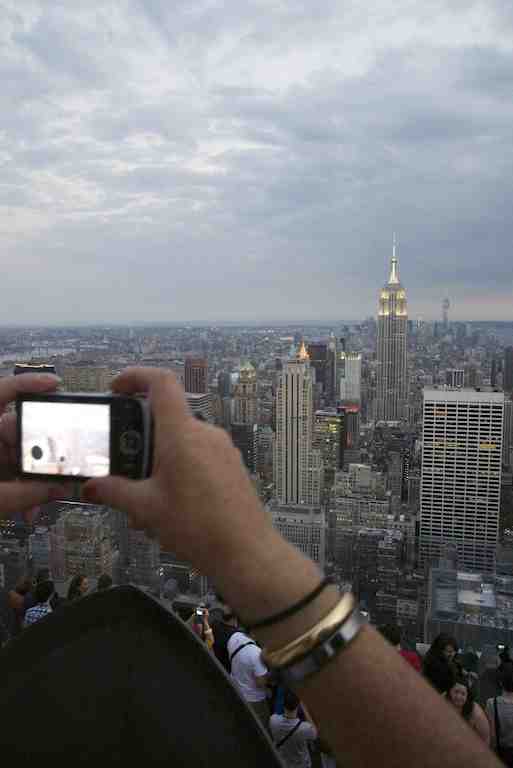 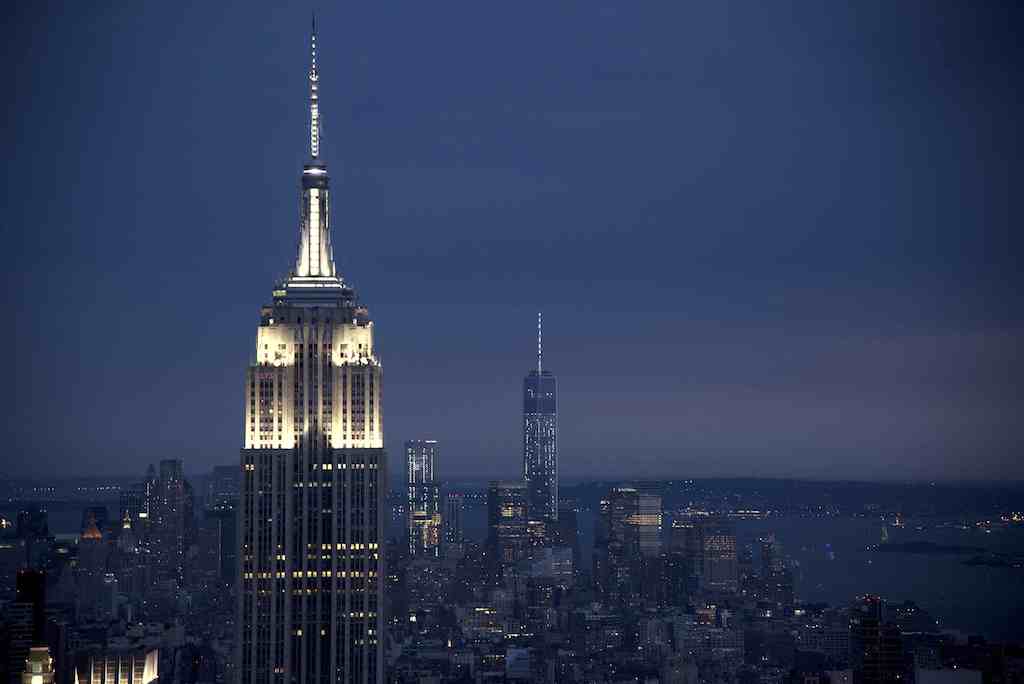 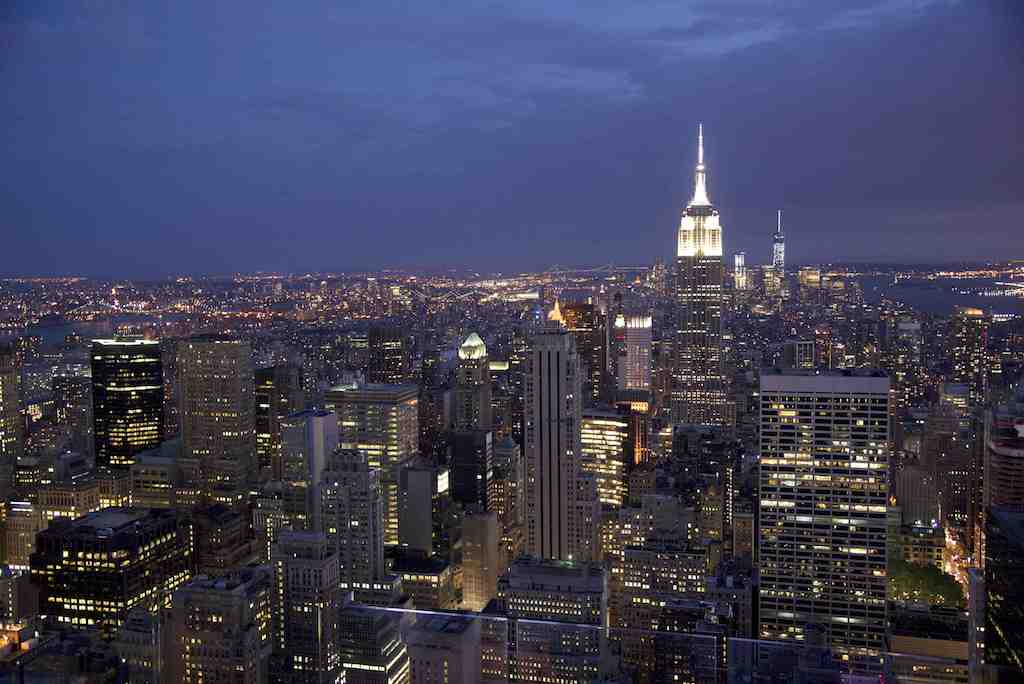 The top deck was extremely crowded just before sunset. Look at the crowd everywhere. 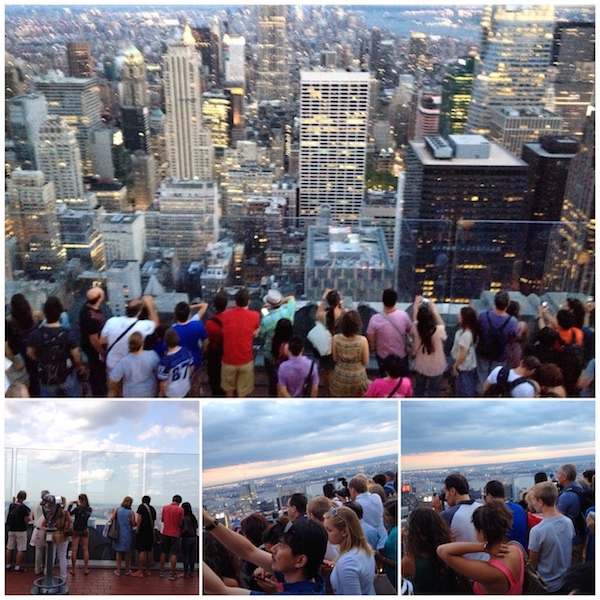 View of other parts of Manhattan: 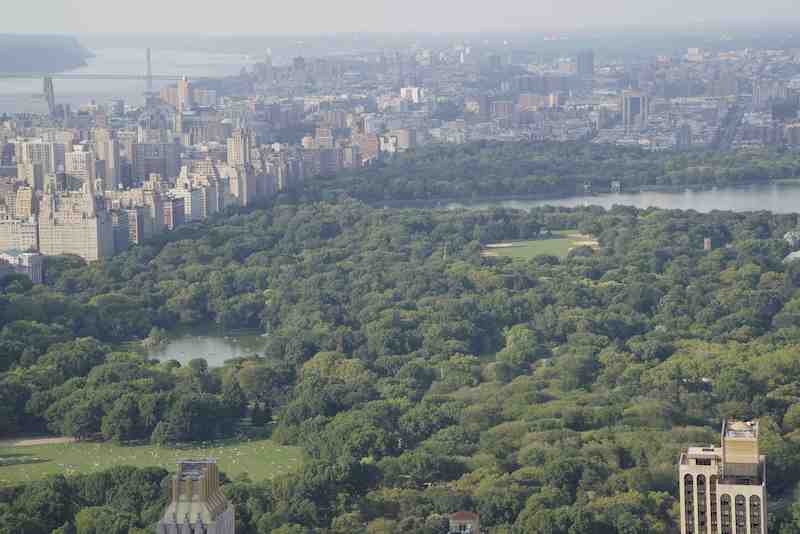 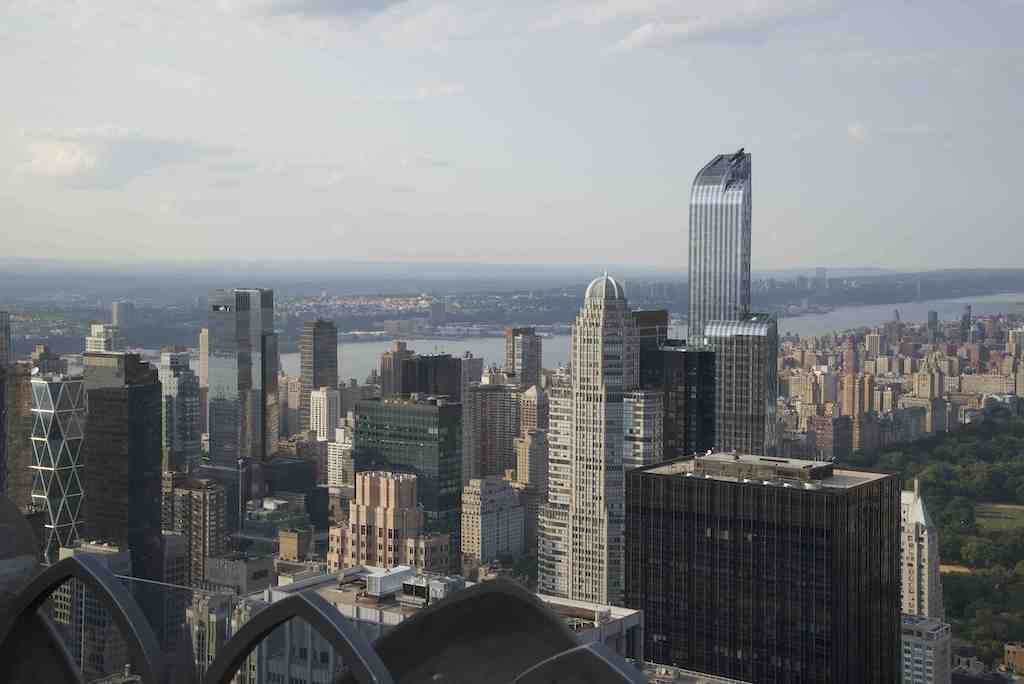 Ticket price: $30 per person. You can buy tickets online or at the Rockefeller Center. New York Pass holders get fast track and free entry to the Top of the Rock Center. Find out more about New York Pass here.

Disclaimer: I was a guest of TOTR and NYCGO. Opinions are my own. For more information about TOTR go to The Top of The Rock Website here.