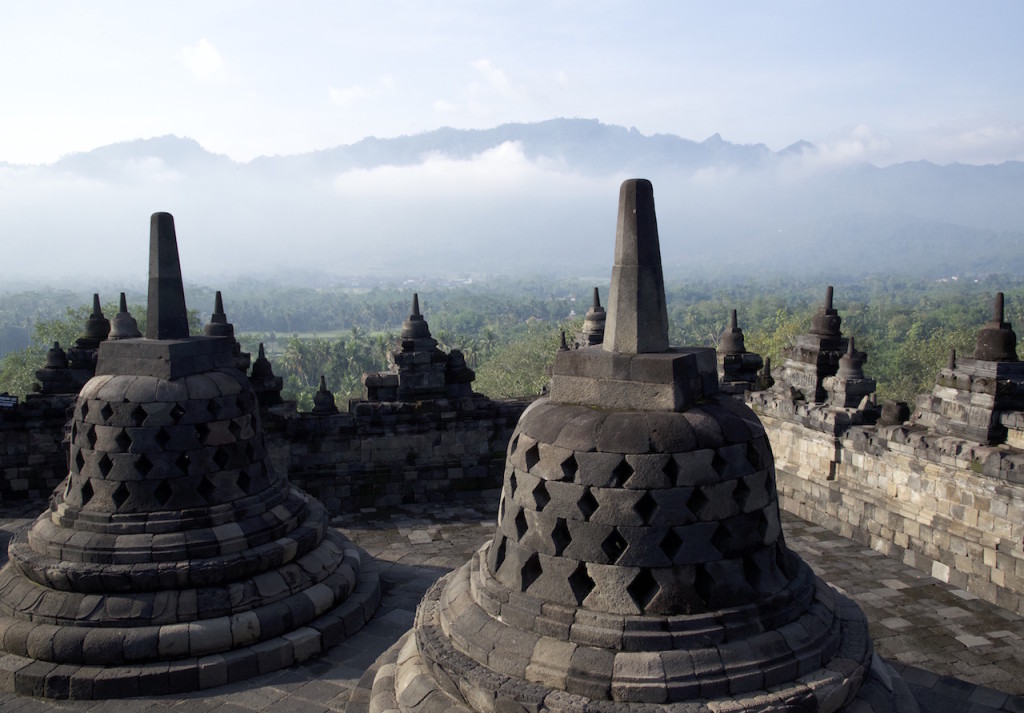 The best time to start your journey to Borobudur is one hour before sunrise, that is if it is not raining. It’s when the sun rises over the Kedu Valley behind 72 punctured stupas, 504 Buddha statues and between two volcanoes - Mount Merapi and Mount Merbabu. It is a terrible time to be awake at 3 am to start the journey at 3:30 am from Jogjakarta. 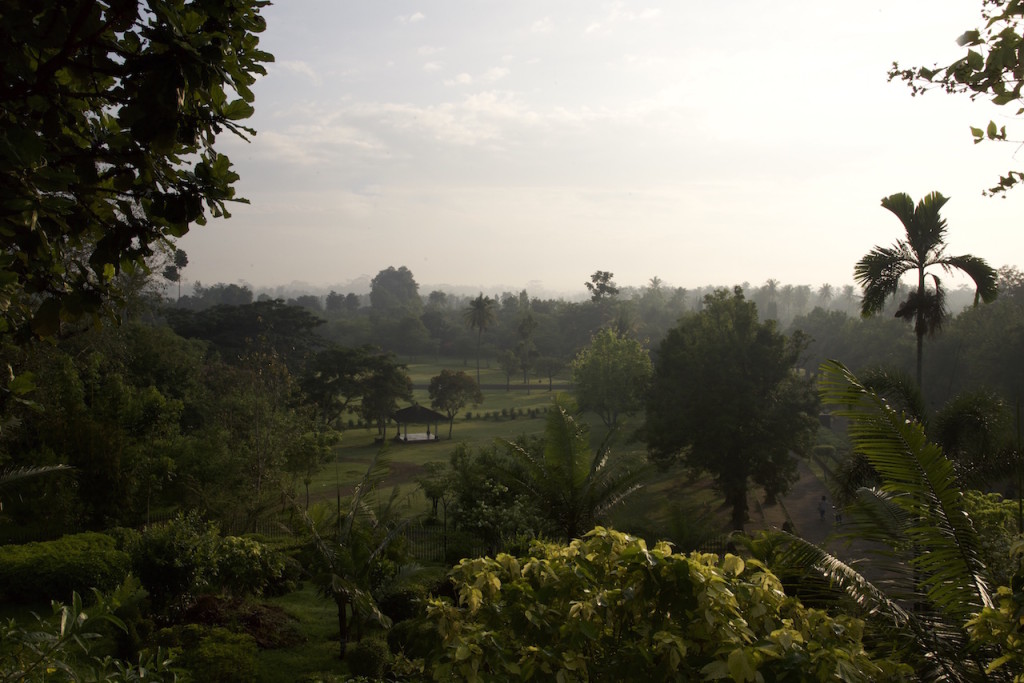 Way before Arab merchants brought Islam to Java Indonesia in the 14th century, the kings of the Saliendra dynasty in Central Java embraced Buddhism. Buddhism and Hinduism came to Java Indonesia from India, and according to BBC, around AD 1 when Indian and Chinese merchants were trading for spices in the South East Asian region. 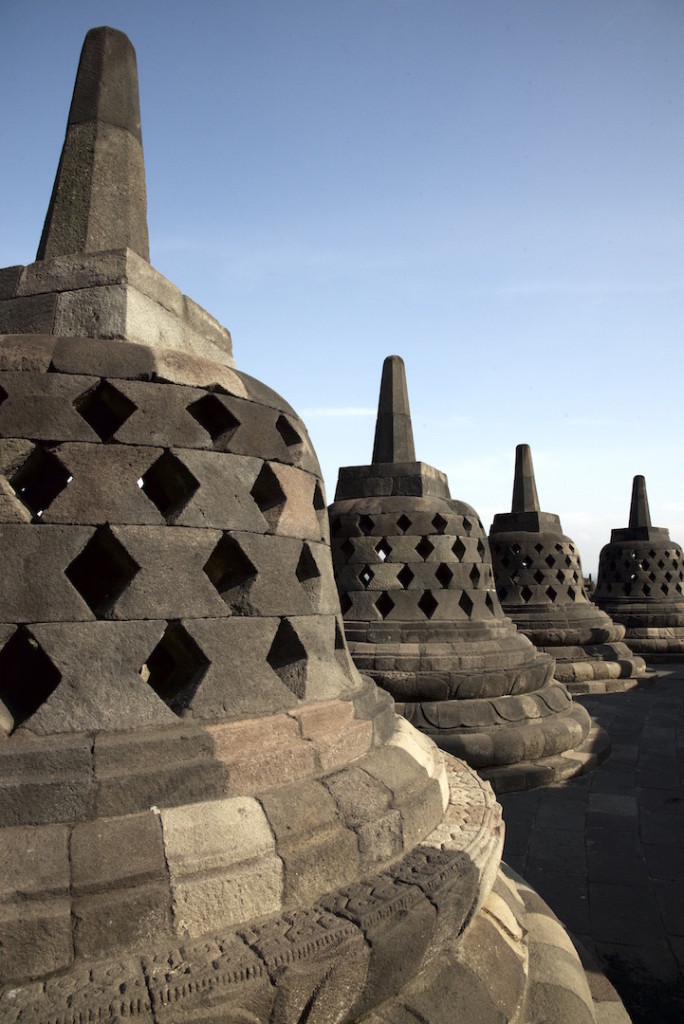 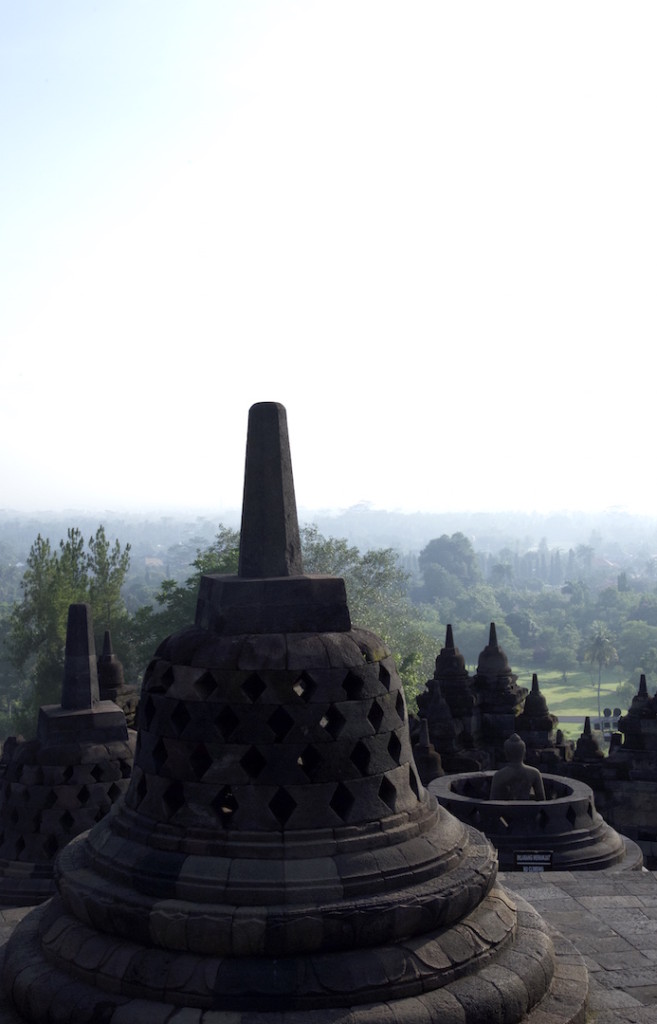 Borobudur is older than the well-known Angkor Wat of Cambodia and Bagan of Myanmar. It is the world’s largest Buddhist monument built like a pyramid with a square base, followed by five square terraces and three circular terraces. The temple was built between AD 780 and AD840 and according to BBC, it resembles a mandala – a wheel-shaped symbol of the cosmos. It has nine levels, which resembles the nine stages of the Buddhist cosmic system. Borobudur was built with two million blocks of volcanic stones and the stones were colored to resemble the sun. 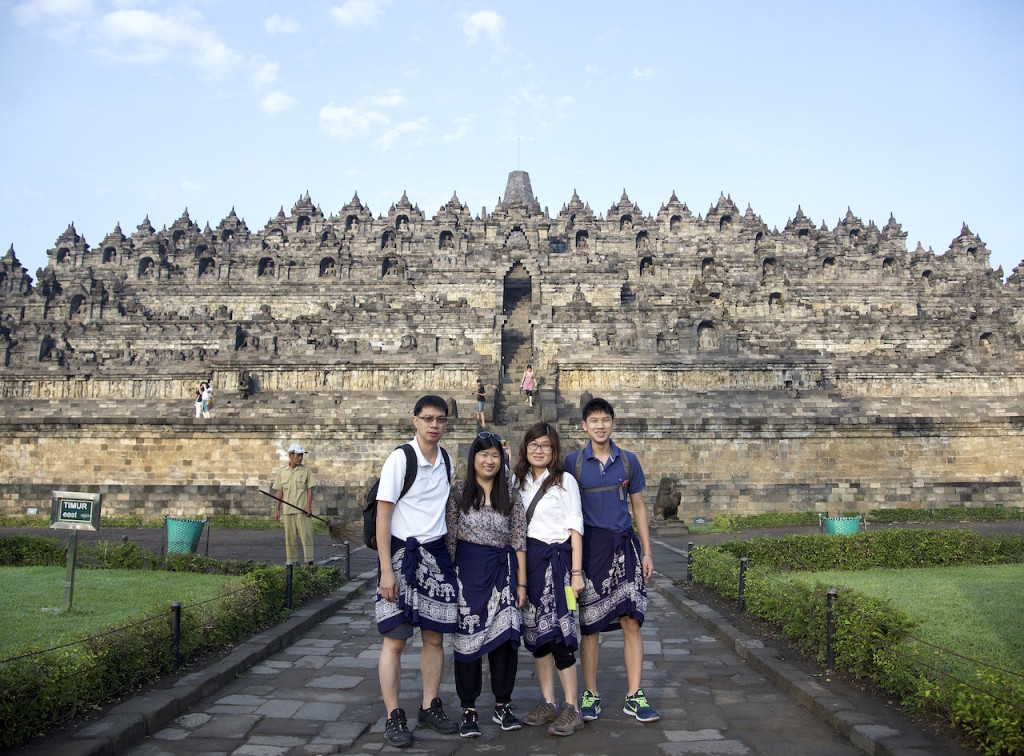 Here we were in front of Borobudur in sarongs. Our tour guide loved to take our photos. 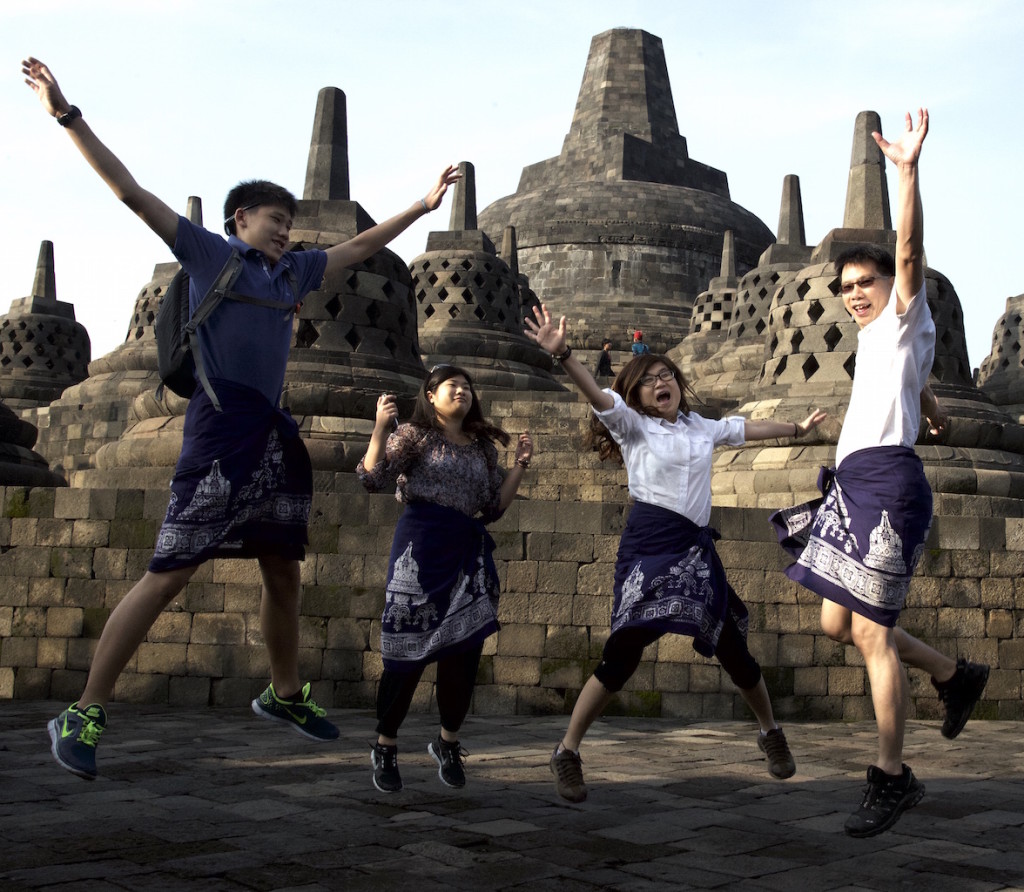 A walk up the steep steps of Borobudur is both physically and spiritually challenging. It was meant to be a walk on a path to enlightenment – from the base to the top. The five square terraces are filled with bas-reliefs with stories of Gautama Buddha (founder of Buddhism) and teachings of the Mahayana Buddhism. 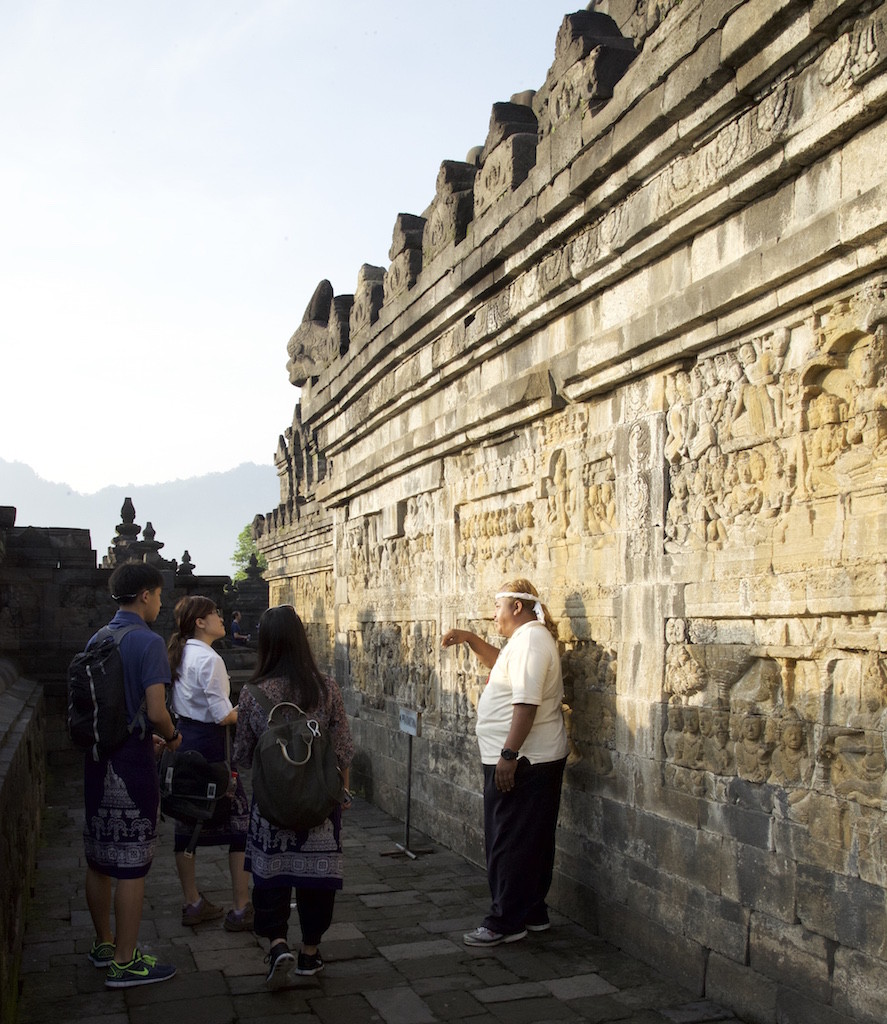 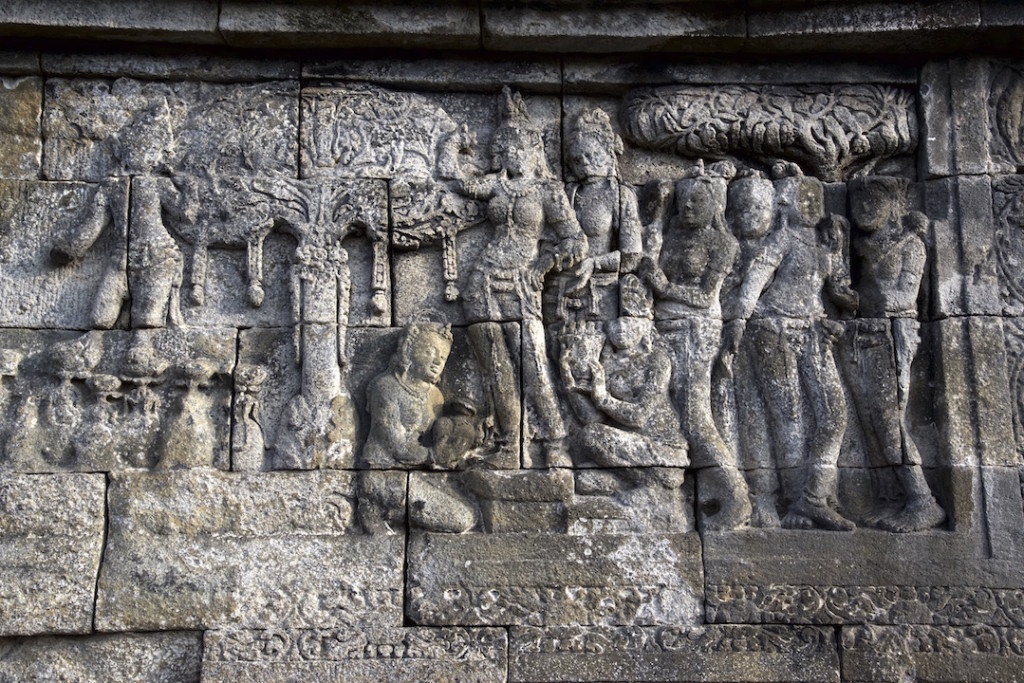 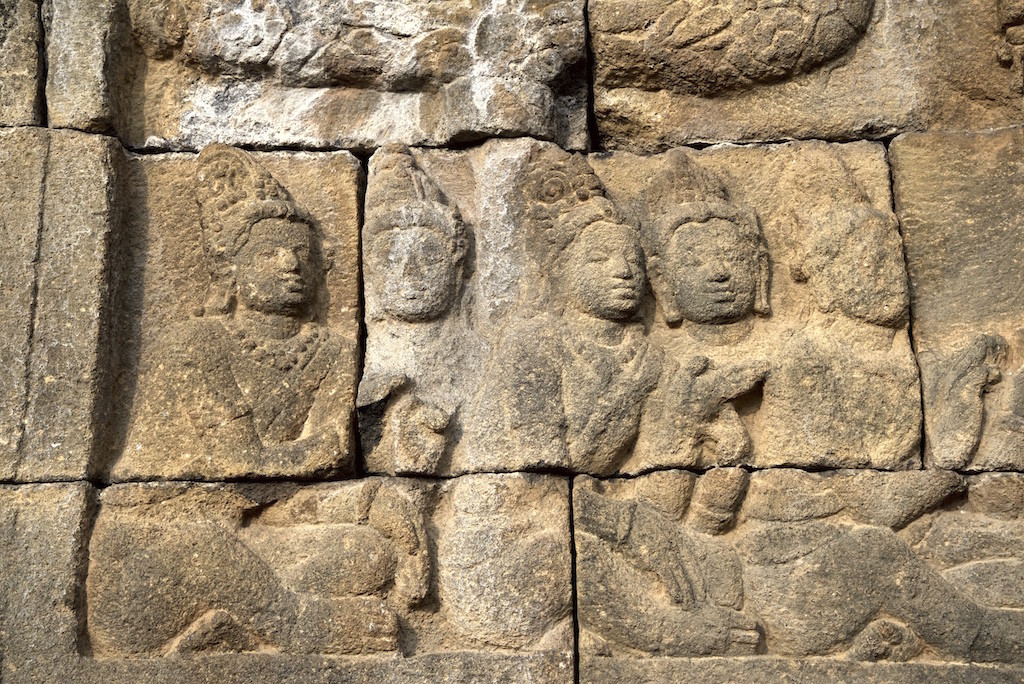 Worshipers were supposed to learn and gain wisdom from these bas-reliefs before ascending to higher levels and getting higher consciousness and enlightenment. The 72 punctured bell-shaped stupas, some with a statue of Buddha lined the upper level of Borobudur. These stupas signify “the realm of formlessness”, as the tour guide pointed out and that’s where you see everything around you – the state of clarity without walls and restrictions. Here at the top, you will see the lush green tropical forest, the volcanoes and clouds hovering over the valley. 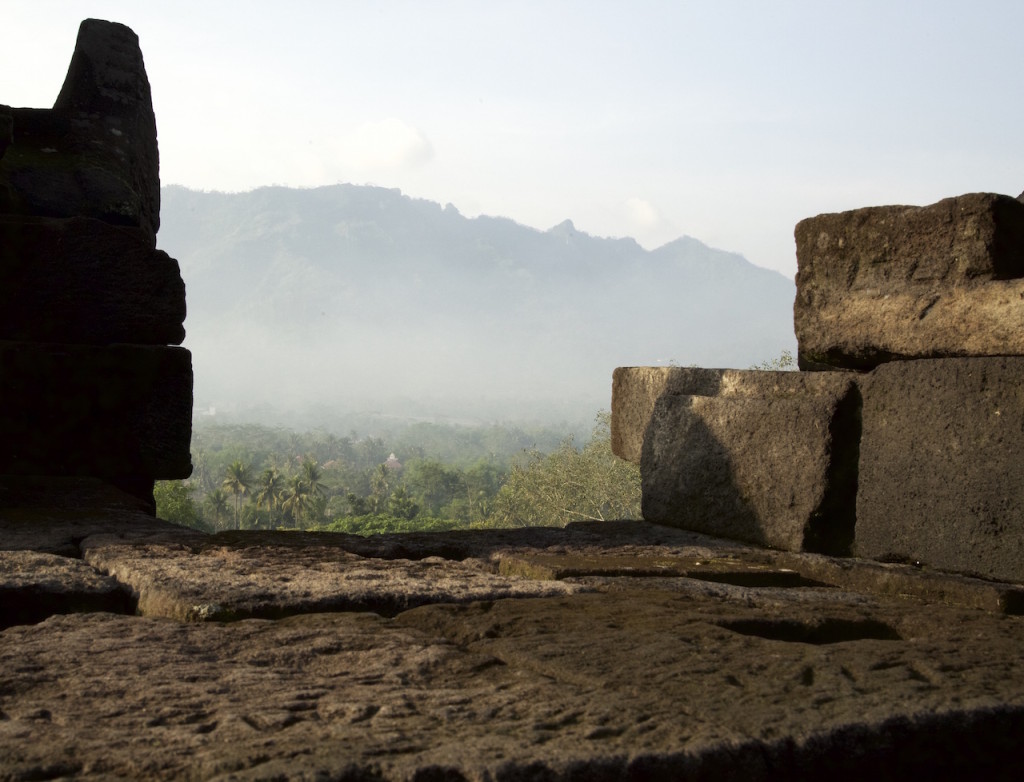 At the uppermost level is the middle stupa, surrounded by the galleries of punctured stupas, which signifies the core of the universe.

Long forgotten, wiped out and buried in ashes from the many volcanic eruptions, the temple was rediscovered in 1815 by Sir Thomas Stamford Raffles, the founder of Singapore and governor of Java. Borobudur is located 35 miles from JogJakarta.

Borobudur is one of the highlights of my around the world trip. It was on par with Machu Picchu in Peru, Iguazu Falls in Brazil and Argentina and Lake Baikal in Siberia, to name just a few.

1. We recommend hiring a guide when touring Borobudur. They are available for 100,000 rupiah (cash, not including tips) at the gate after the ticket counters at the ticket office.

2. Every visitor must wear the sarong provided by the ticket office.

4. Take a photo behind a Buddha statue on the fifth level. 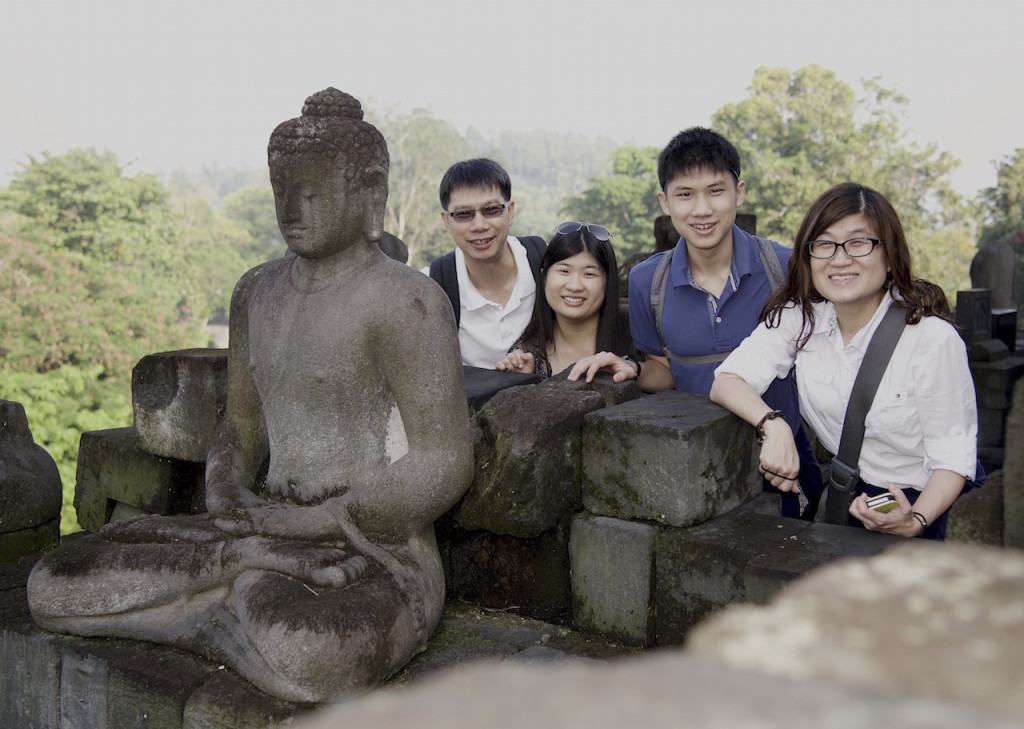 Looking for a trip to Indonesia including Jakarta, Jogjakarta, Borobudur and Bali? Check out Intrepid Travel's 22 Days Java and Bali Explorer « Is Yogyakarta in Your Travel Bucket List?
Where to Stay When Vacationing in Bali Indonesia »