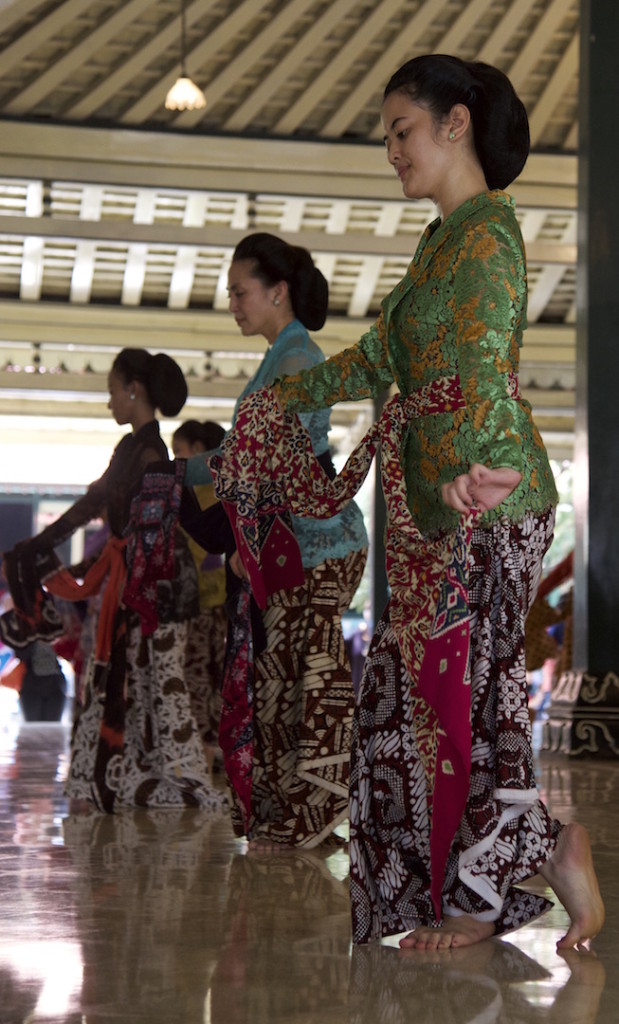 Yogyakarta has the history and cultural heritage to connect the present Java to the past. It is one of most underappreciated destinations in Asia. Located near the southern coast of Central Java, it is home to one UNESCO Heritage Sites (10th century Hindu temple) and the gateway to the world’s largest Buddhist shrine, also a UNESCO Heritage Site.

There’s much more to this cultural center of Java than the UNESCO sites. Yogyakarta, also known as Jogja to the locals has the oldest university in Indonesia (Gadjah Mada University), is the birthplace of wayang kulit (shadow puppets) and batik. It is a city filled with skilled traditional artists and home to Indonesia’s new generation of budding artists. 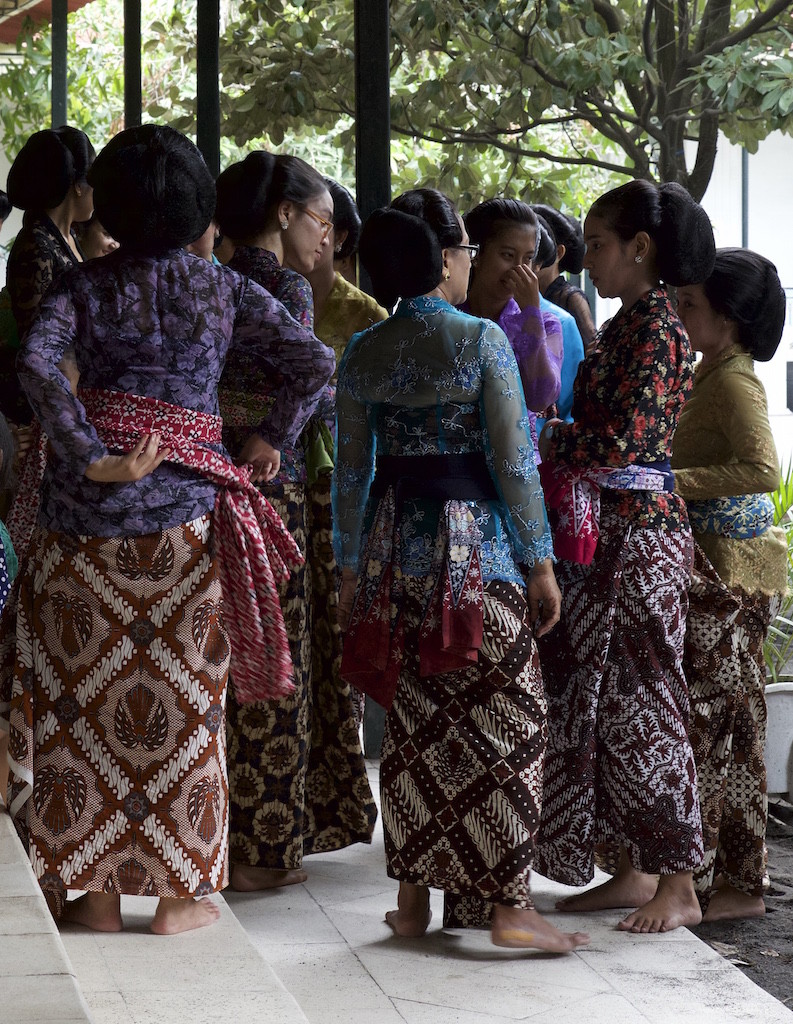 Ladies in beautiful batik at the Kraton

Best yet, there is a sultan (king) in Yogyakarta. While all the sultanates in Java and other islands of Indonesia have faded through political struggles and colonialism, Sultan Hamengkubowono X, the current Sultan of Yogyakarta is still in power and able to maintain strong support from his subjects despite challenges from people with other political agendas.

One can look into the history of Yogyakarta’s sultanate at the Kraton Palace where the current sultan still resides within the walled city. Most parts of the palace which served as living quarters to the Sultan are sealed off from tourists. Prince Mangkubumi built the Kraton in 1755 after naming himself as the Sultan of Yogyakarta. His kingdom was very influential in Java during the 17th century. Architecturally, the Kraton is one of the most well-preserved Javanese palaces in Indonesia. 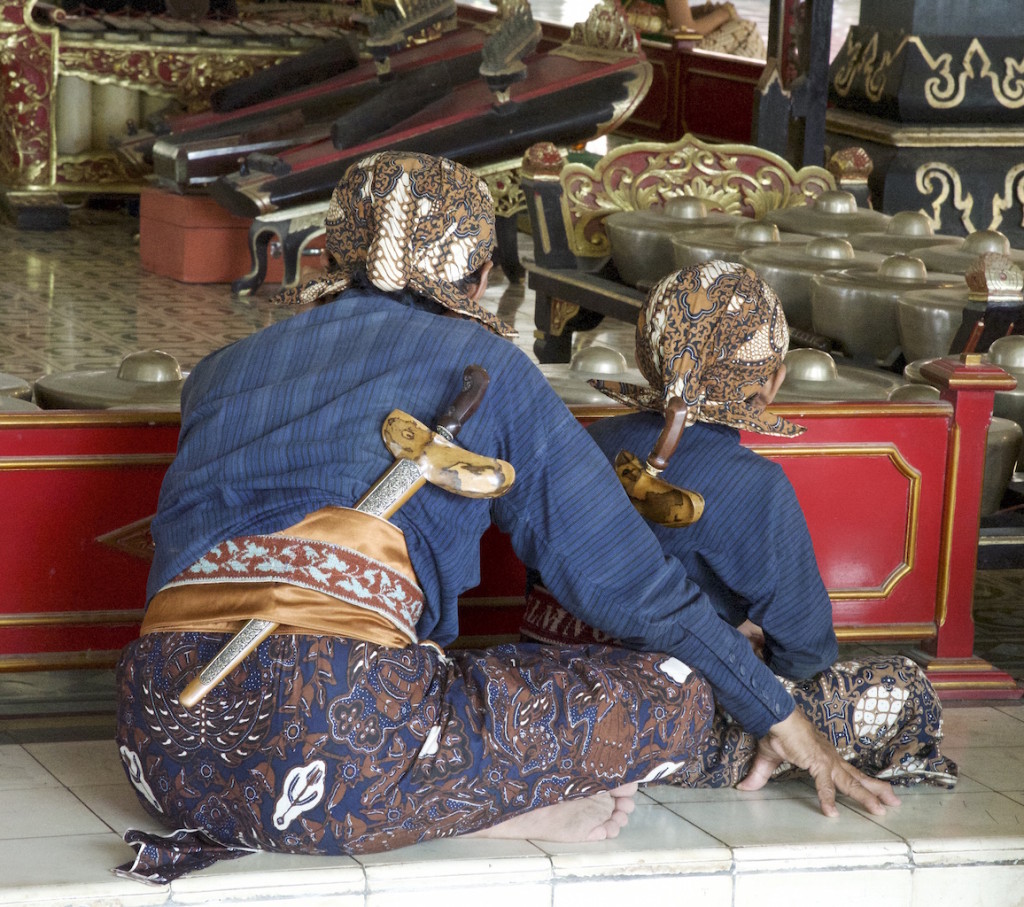 The male guards, cleaners and administrators inside the palace are adorned in traditional Javanese attire including the traditional head gear and kris (ceremonial knife) tucked onto their sashes. These are the Sultan's employees and most are older gentlemen, probably who have been working at the palace for decades. 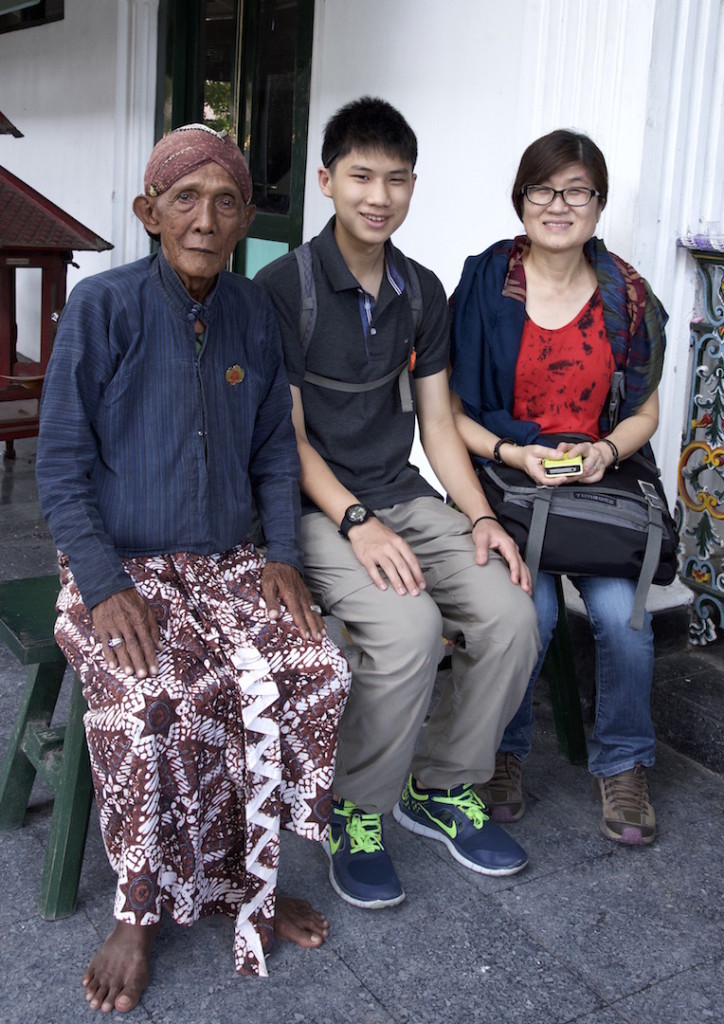 My son and I with a worker in Kraton

The Kraton is a living museum where daily ceremonies are still taking place. The highlights of tours to the Kraton are the live performances. There was a Ramayana ballet, a classical Javanese dance accompanied by gamelan and singing. 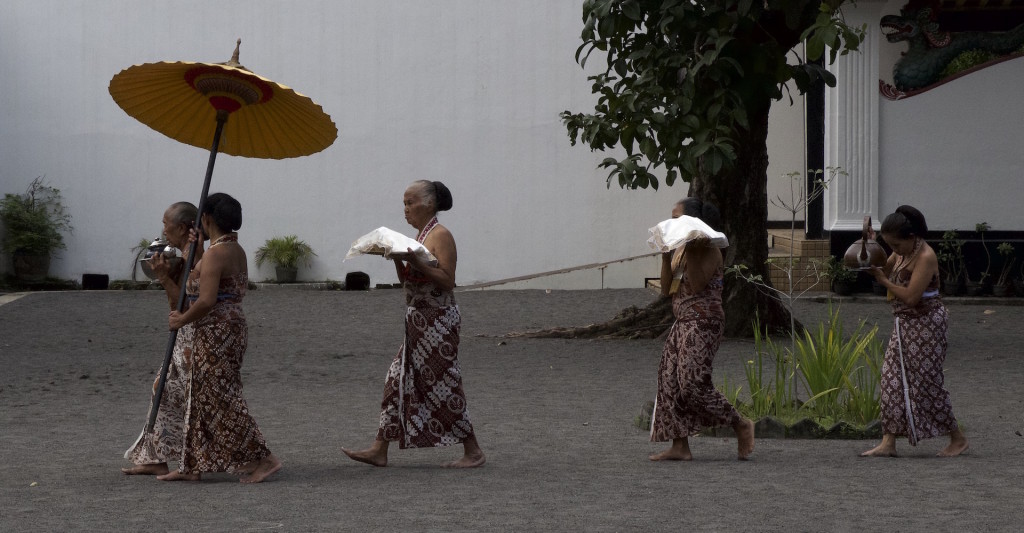 Ladies at the Kraton carrying the traditional umbrella and ceremonial lunch 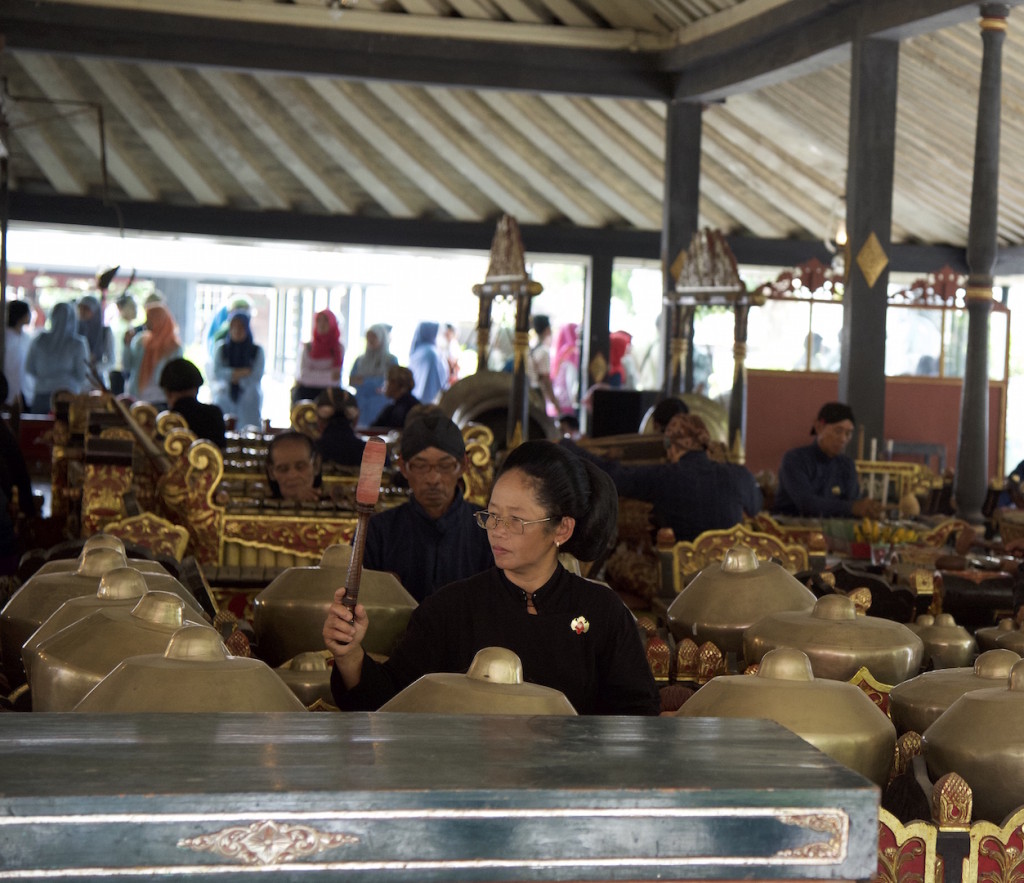 Most tours in Yogyakarta include visiting Taman Sari, the royal Water Castle, the king’s former garden and recreation center. It is part of the Kraton and now serves as a tourist site.

Inside the main area is the public swimming pool with incense (fragrance and oil) burning stoves. In an enclosed area is the Sultan’s private pool, private fortress and room. The Sultan had the luxury of viewing his potential concubines swimming in the public pool from his private viewing area. 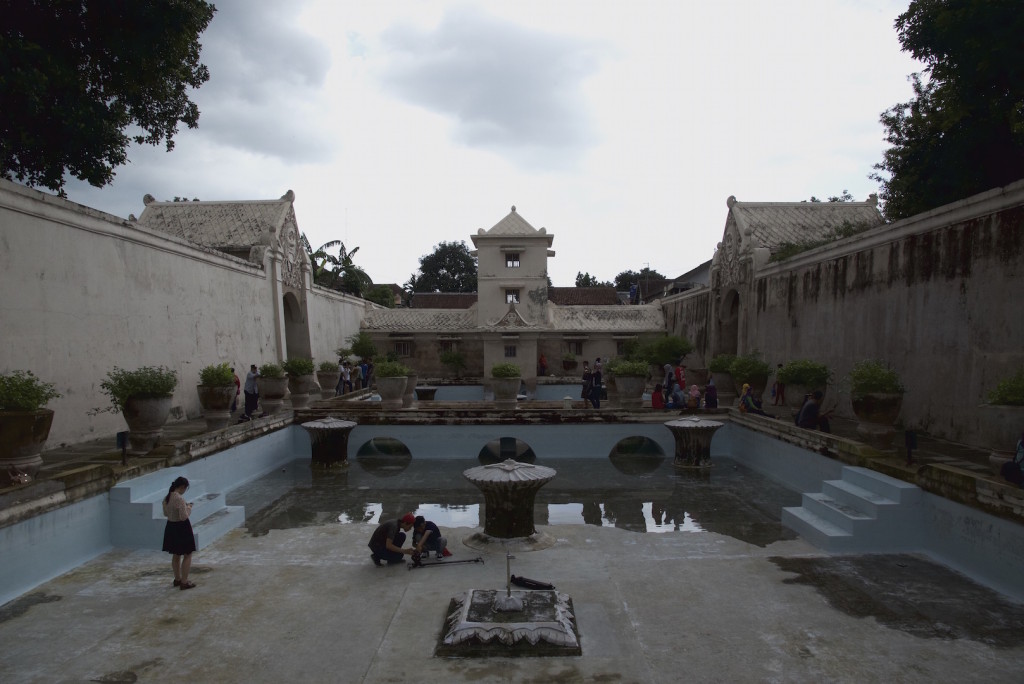 Guides usually stand at the entrance welcoming guests to Water Castle. Our guide, Andres was born and raised beside Taman Sari. He told the stories of his father who was the gardener for the king and his grandfather and great-grandfather and beyond who were also servants to the king. Because of this relationship, most ‘servants’ like his family were given land near the palace and Water Castle to build their homes. 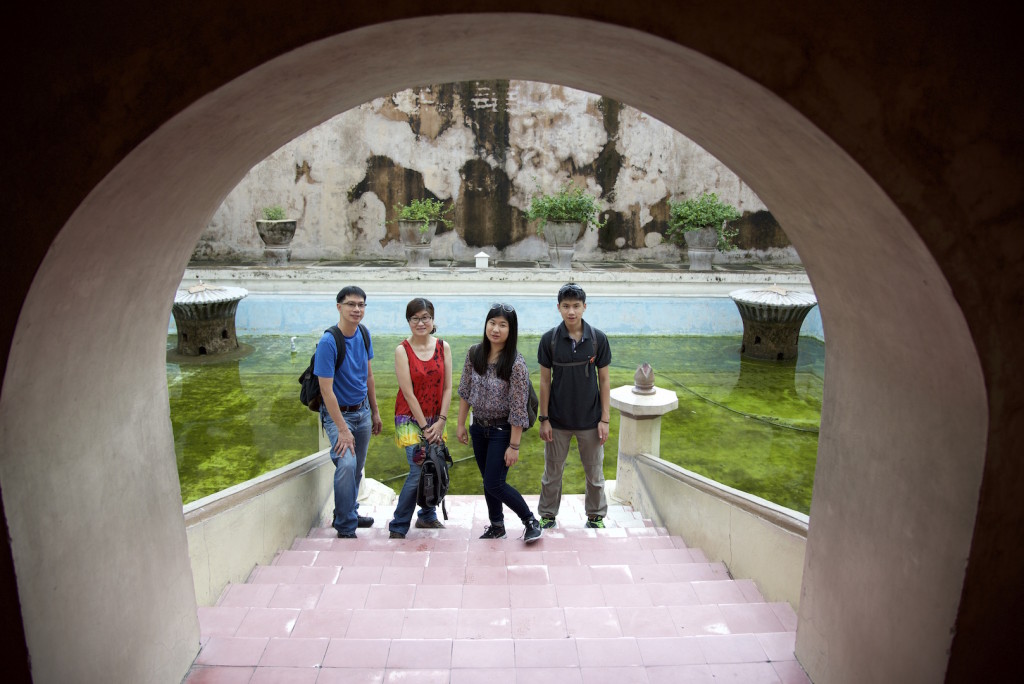 He pointed to his ‘apartment’, a three-story wooden row house behind the king’s private pool. Unfortunately, they will soon be relocated because the king has sold the land to the city to make way for shops, cafés and restaurants to serve tourists.

Andres showed the village behind Taman Sari where his neighborhood, his art gallery, and batik workshops were located. Taman Sari itself was not a pretty place and did not have any ‘wow’ factor as a tourist destination. But Andres’ stories gave a background into the devotion of the people to the Sultan, the benefits of serving the Sultan and the Sultan’s tolerance of people of all religion. 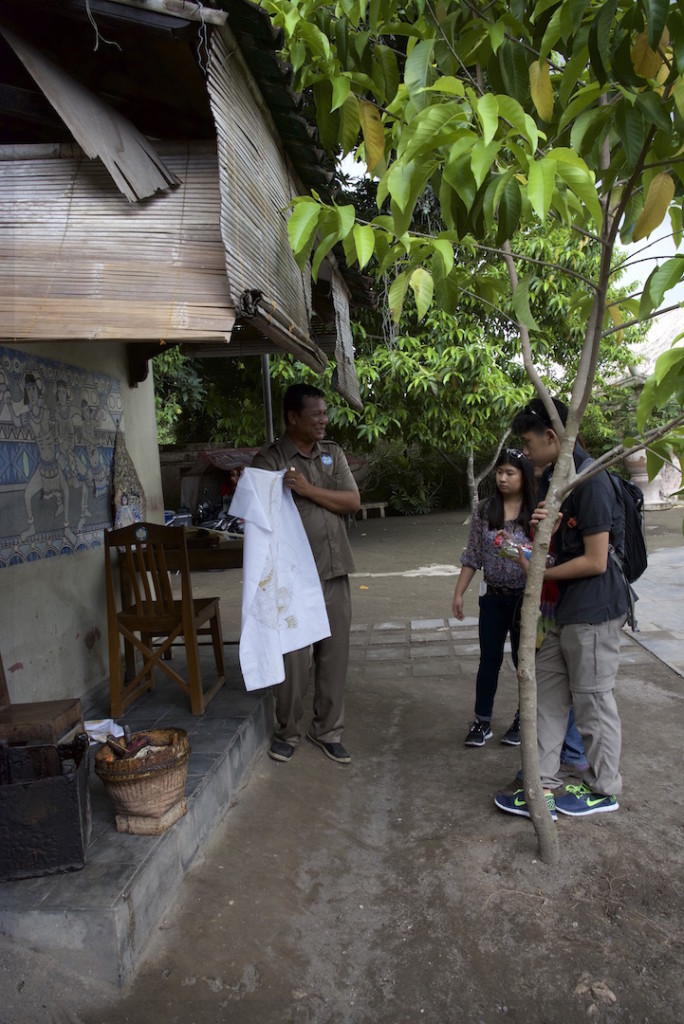 The Sultan embraces Islam while some of his subjects, like Andres' family are devoted Catholics that have served the Sultan for centuries. Yogyakarta is home to the largest Hindu temple in Indonesia and just a few miles from the world’s largest Buddhist shrine.

The largest Hindu temple in Indonesia, Candi Prambanan was built in the 10th century. Its compound was dedicated to the temples with reliefs that illustrate the epic of the Ramayana and were dedicated to Shiva, Vishnu and Brahma. (Candi means temple in Javanese). You can read more about Prambanan on UNESCO’s website. 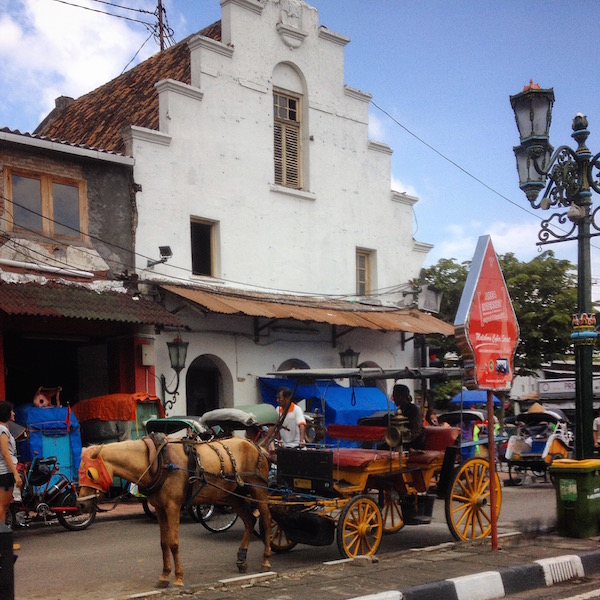 Yogyakarta's horse-drawn carriage in front of a Dutch colonial building 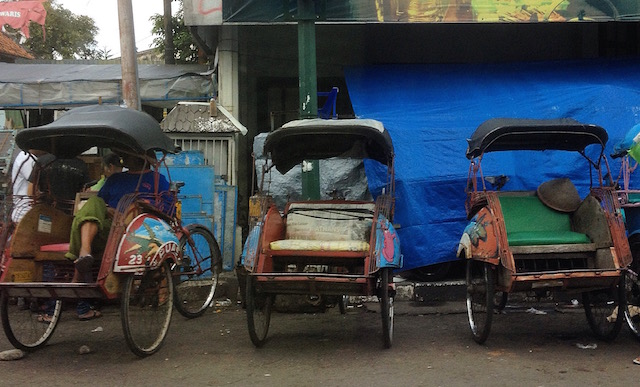 Becak (Rickshaws) in front of shacks 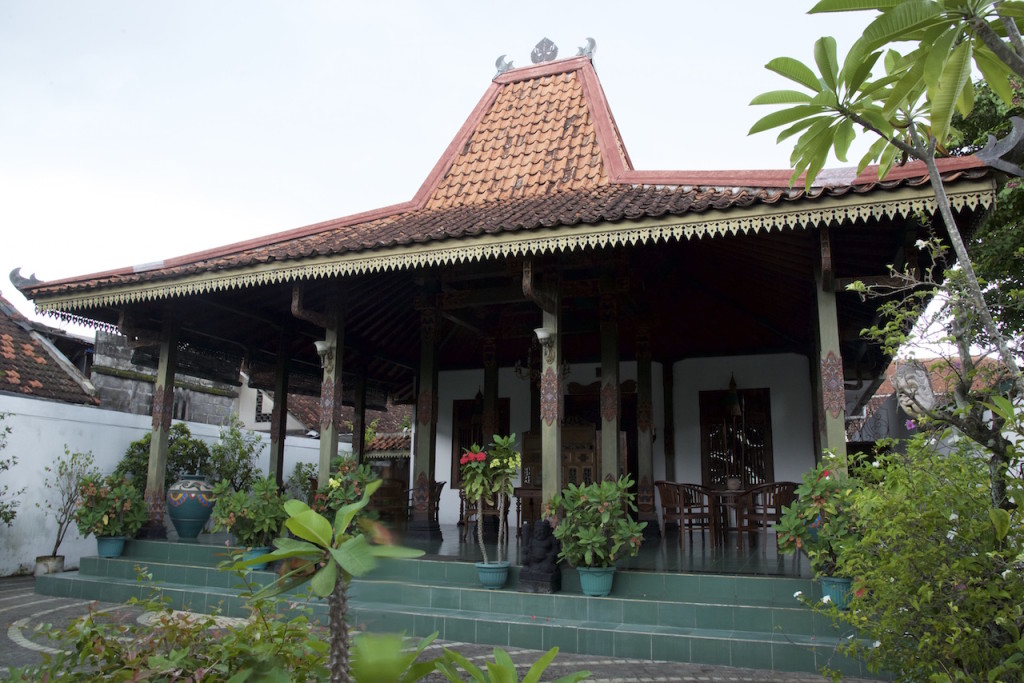 A house in Taman Sari neighborhood with Javanese architecture

The one place you can’t miss when traveling to Jogja is Borobudur. It is because of Borobudur that one should add Jogja in the list of places to visit before you die.

Read more about Borobudur in the next blog post.

Malioboro is the main street of Jogja with touristic stores selling batik, handicrafts and art. Pasar Beringharjo (a traditional market) is located at the end of Malioboro. You’ll find better prices at the market.

Every city has a unique must-try dish. In Jogja it is the gudeg. Gudeg consist of opor ayam (dried curry chicken), a hard boiled egg, krecek (stewed buffalo skin), rice and young jackfruit (looks like cempedak but smaller in size) stewed with palm sugar. Overall the dish is sweet, not spicy or savory. 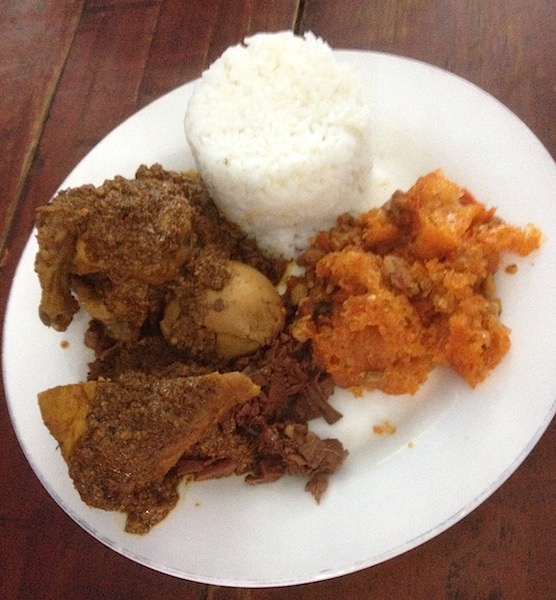 You’ll find a row of restaurants serving gudeg, all with names like “Gudeg Bu_____.” Gudeg being the name of the dish and “bu” is short for “ibu” which is a respectable way of addressing a married woman. These establishments have low tables where diners sit on the wooden floor to eat. 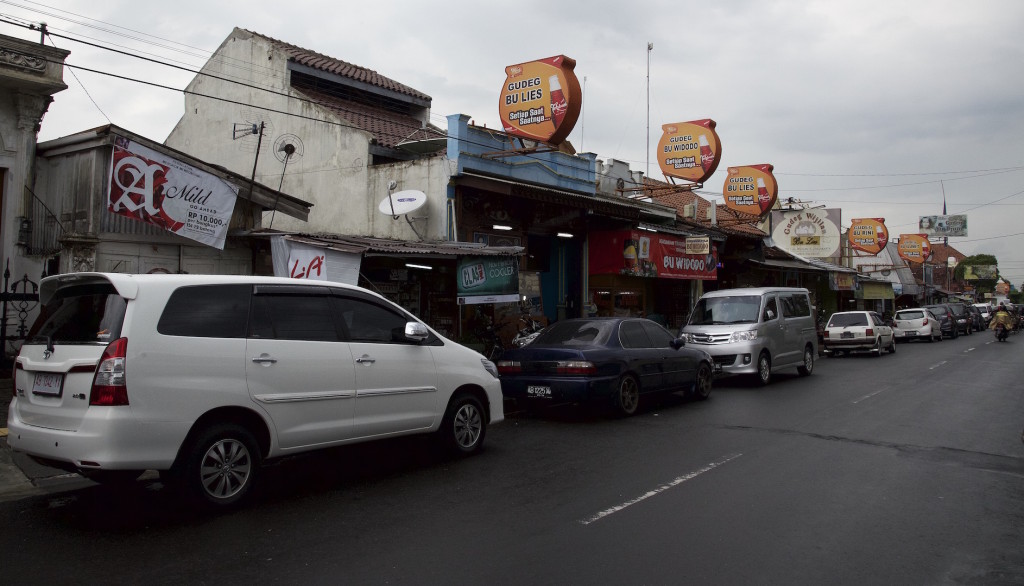 Another dish is bakso, though bakso is sold all over Indonesia. Bakso are meatballs served in noodle soup. Signs with the word "bakso" can be seen throughout the city and on the way to Borobudur. Jogja’s bakso comes in all sizes, some bigger than golf balls. Even President Obama loved bakso while growing up in Indonesia. 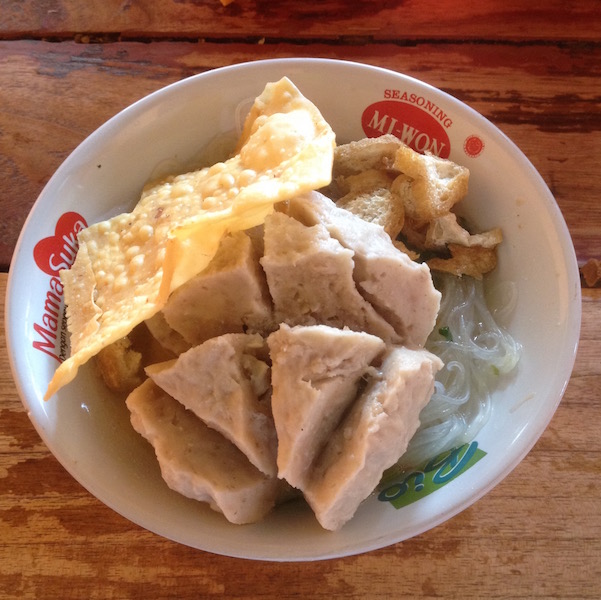 One big bakso in noodle soup

One more thing to consider:

Locals love to take photos with Caucasian tourists. Why? That's another story... 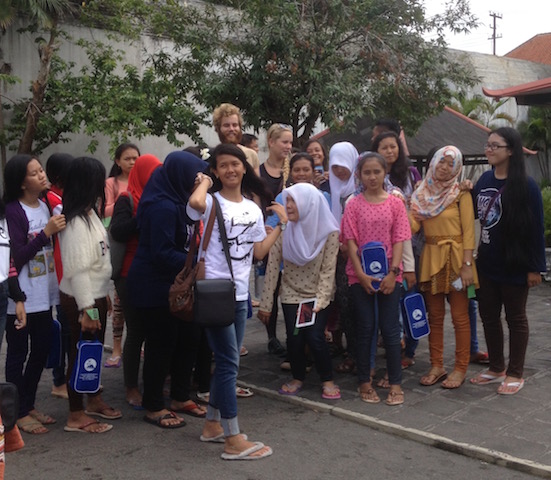