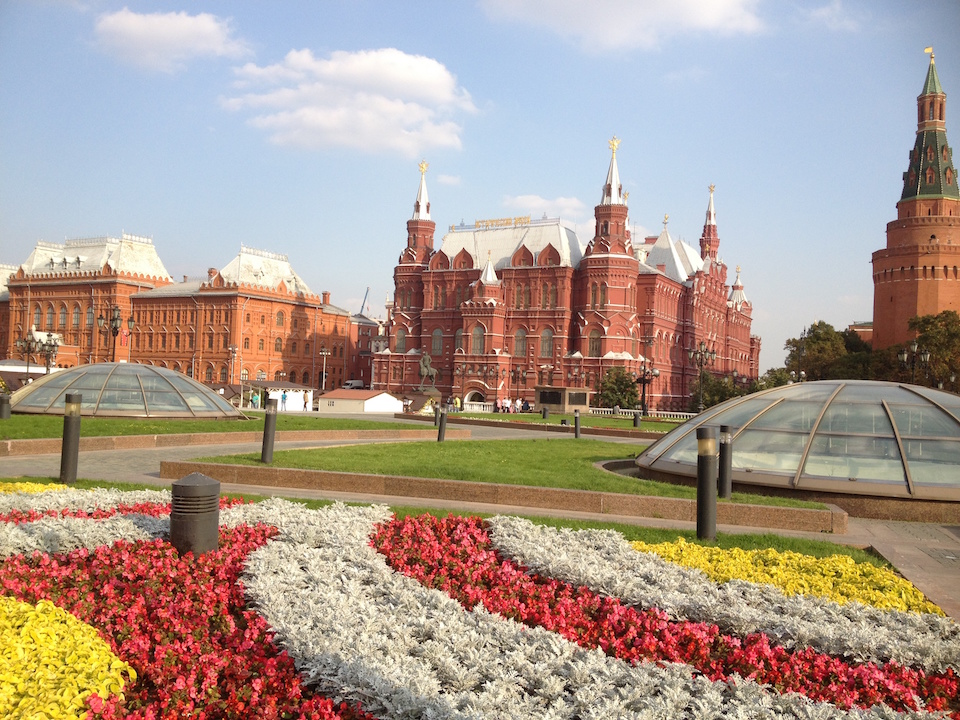 Everyone knows about the devastation of the Soviet-era, but did you know that the treasures of Russia’s pre Soviet-era are still intact? Twenty-first-century Moscow is a city with magnificent squares, cathedrals, artwork, shopping and remnants of the Soviet-era.

Being led by a Russian speaking English tour leader one day and a local tour guide the next, we pretty much covered a lot of ground at the Kremlin and Red Square. Unfortunately we did not get inside the St. Basil Cathedral or the G.U.M. Department Store. The good news is we saw Lenin's embalmed body inside the Lenin Mausoleum. And the Faberge eggs and imperial treasures at The Armoury Chamber without waiting in line.

The best way to get a view of the Kremlin’s red fortified walls, government buildings, churches and Moscow River is from the Bersenevskaya Embankment. 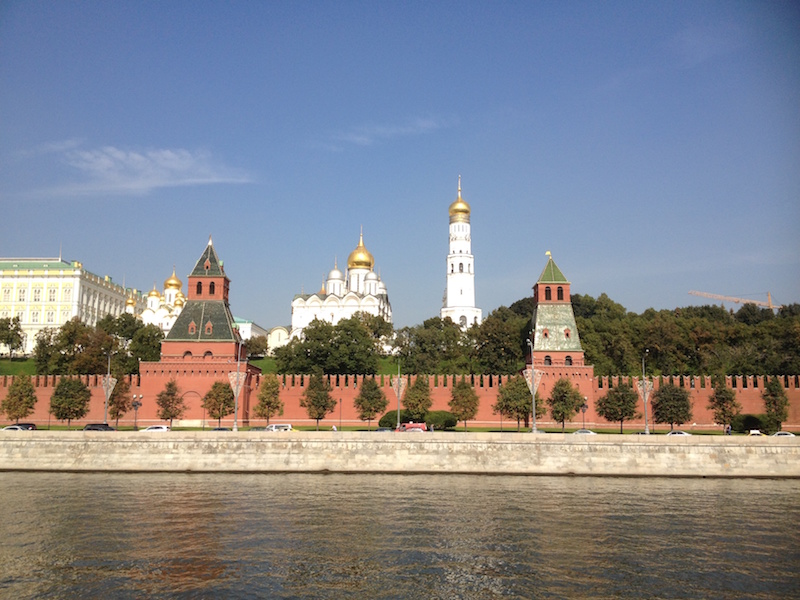 The Kremlin from Bersenevskaya Embankment.

Take the Patriarshy Bridge to the newly rebuilt Cathedral of Christ the Savior. This bridge is a perfect Kremlin and Moscow River photo stop. 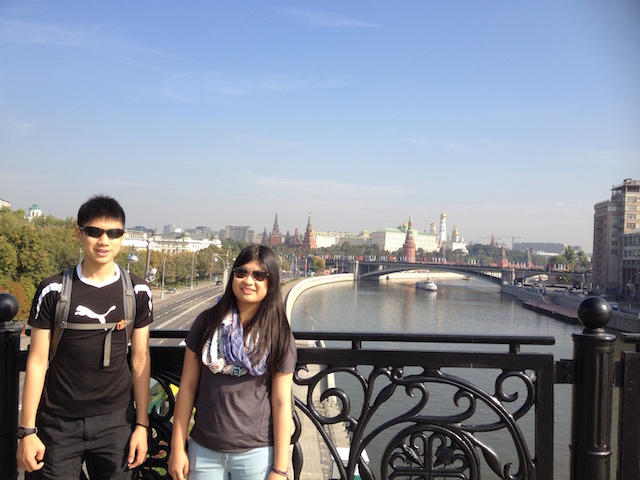 View of Kremlin, Moscow River and the Embankment from Patriarshy Bridge.

The original cathedral was completely demolished by Stalin and the site was used for the city’s swimming pool. After the Soviet-era a new marble and granite super giant building was rebuilt. 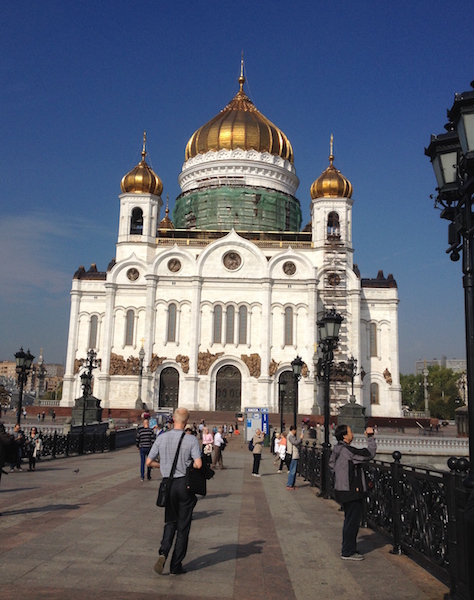 Cathedral of Christ the Savior Moscow.

See Stalin’s seven skyscrapers, also known as “The Seven Sisters” outside the cathedral and on the bridge. You’ll see these buildings spread throughout the city as if guarding the city center from afar. These skyscrapers were built in a period of 10 years and the first was completed in 1949. They are Hotel Leningradskaya, Hotel Ukraina, Kotelnicheskaya Embankment Apartments, Kudrinkaya Square Building, Red Gates Administrative Building, Main Building of Moscow University and Ministry of Foreign Affairs Building.

To me the most beautiful landmark in Moscow is St. Basil’s Cathedral, the 16th century multi-colored onion-domed cathedral that appears in almost every travel guidebooks. The cathedral is located at The Red Square. 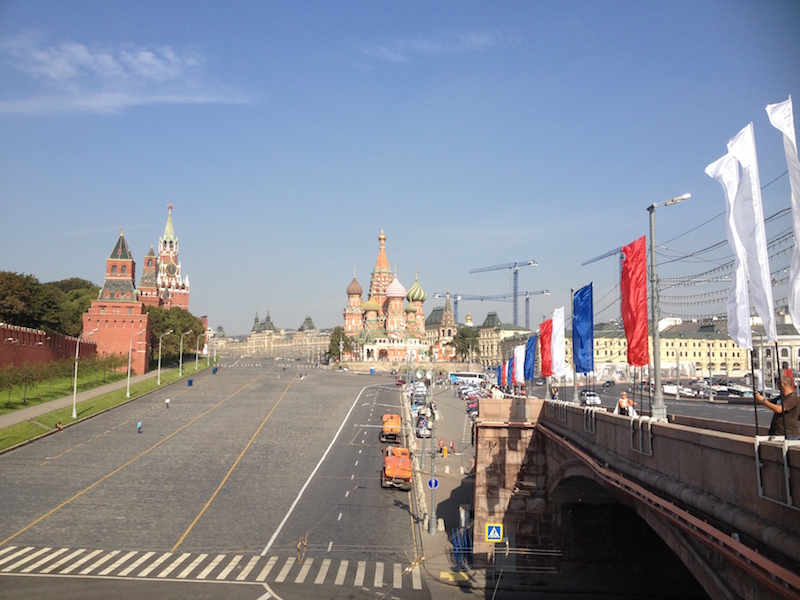 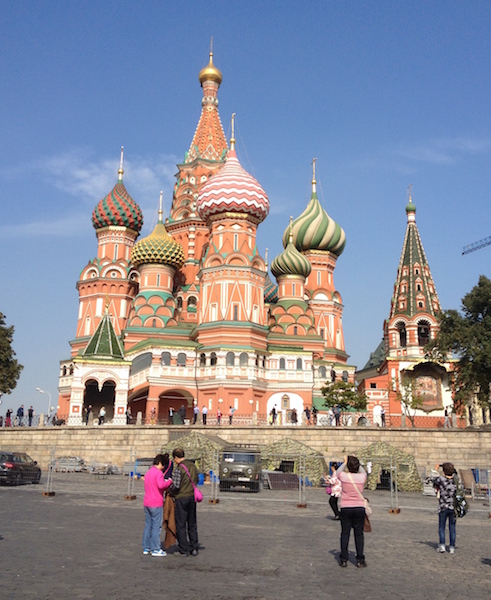 The bricked Red Square’s red colored walls have nothing to do with communism. It was an old red market square and gathering place for Muscovites since the late 1500s. According to History.com, the square was known as Trinity Square in honor of Trinity Cathedral. From the 17th century it was called Krasnaya Ploschad, derived from the word krasnyi in Old Russian means red. Read more here. 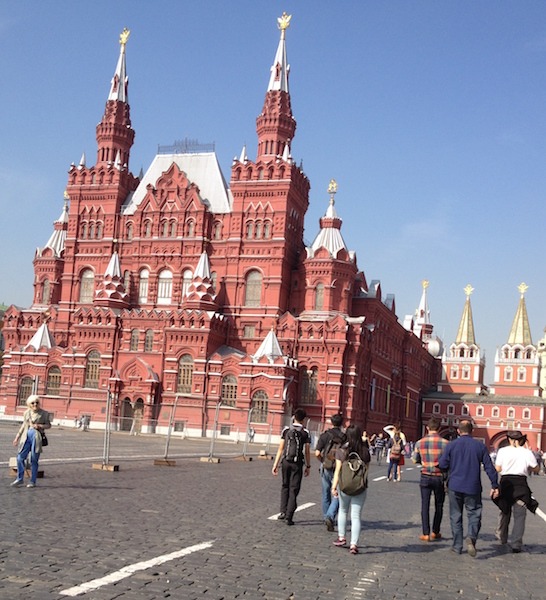 Besides St. Basil’s Cathedral, Lenin’s Mausoleum and G.U.M. Shopping Center are the most popular places to visit at the cobblestone paved Red Square. 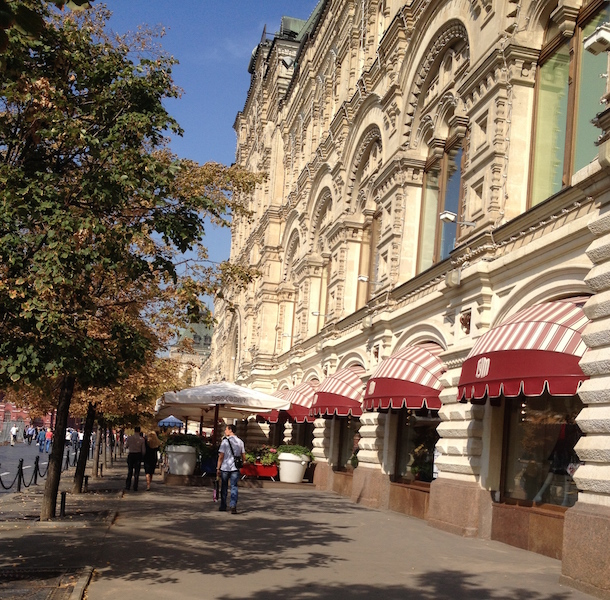 Outside the GUM Moscow

Long lines of tourists usually queued along the Kremlin side of the Red Square to see the embalmed body of Soviet Founder Vladimir Lenin. On the walls and grounds that lead to Lenin’s embalmed body are over 400 tombs with photos and names of the deceased and cremated ash buried inside the wall represented by black plaques. 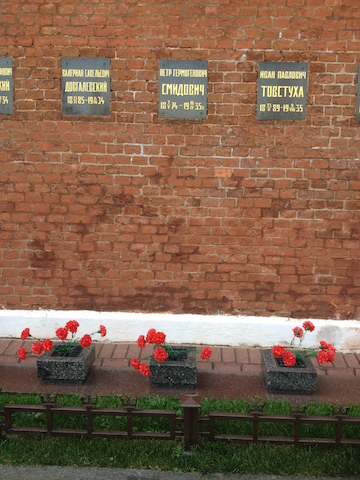 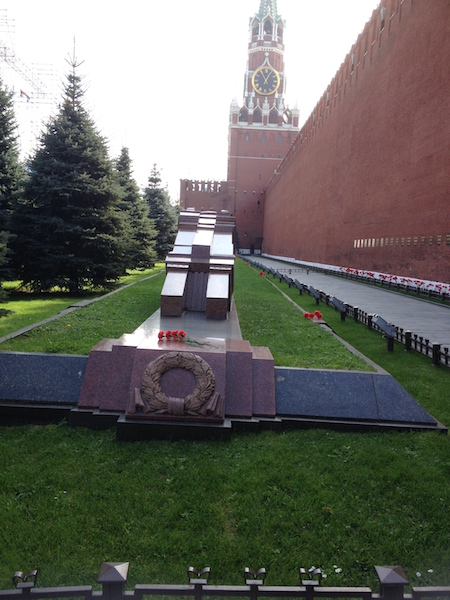 Lenin’s mausoleum was solemn and well guided. No photography was allowed inside. 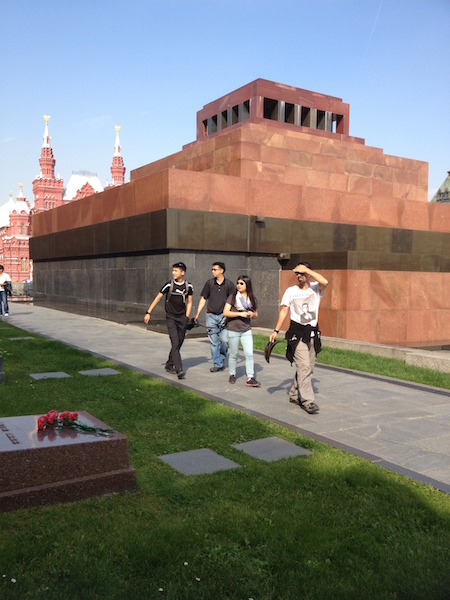 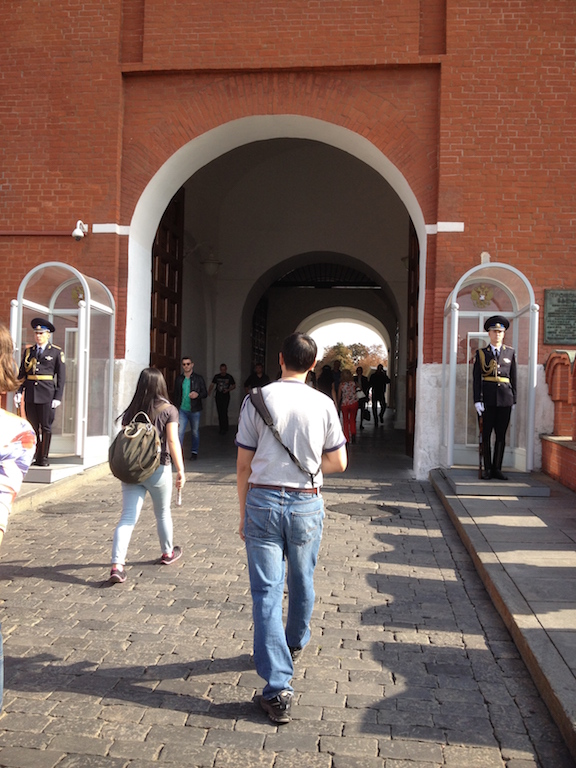 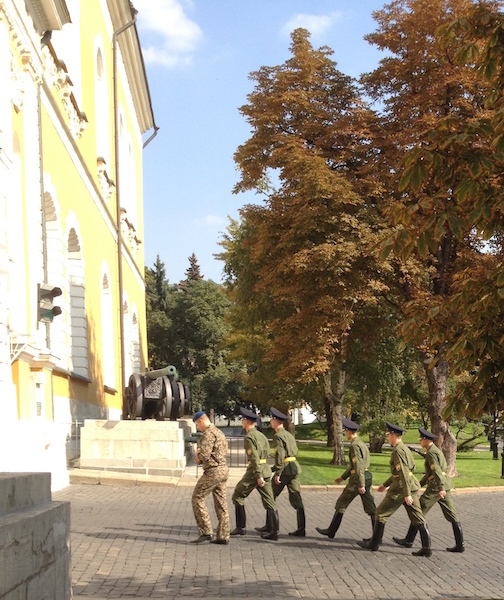 Russia has many kremlins. A kremlin is an important fortified complex within a city. Moscow Kremlin is worth a visit. There are five cathedrals, Tsar cannons, Tsar Bell, gardens and The Armoury Chamber. The Armoury Chamber requires a separate ticket (entrance fee) to enter. 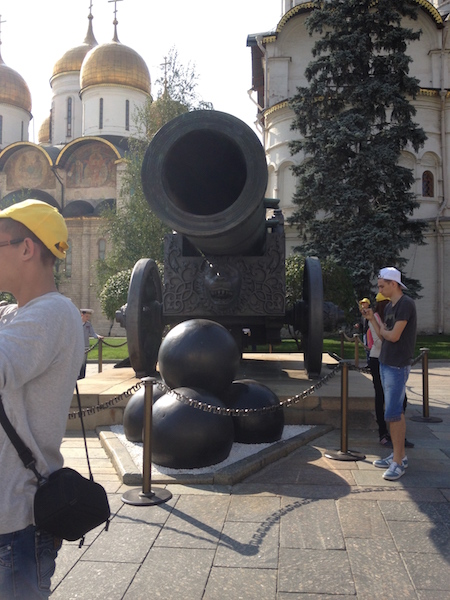 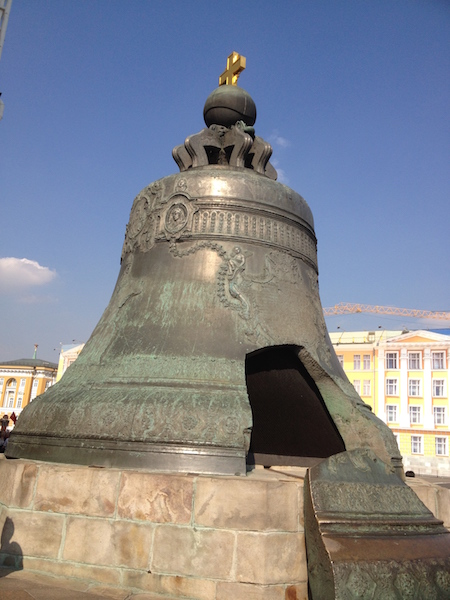 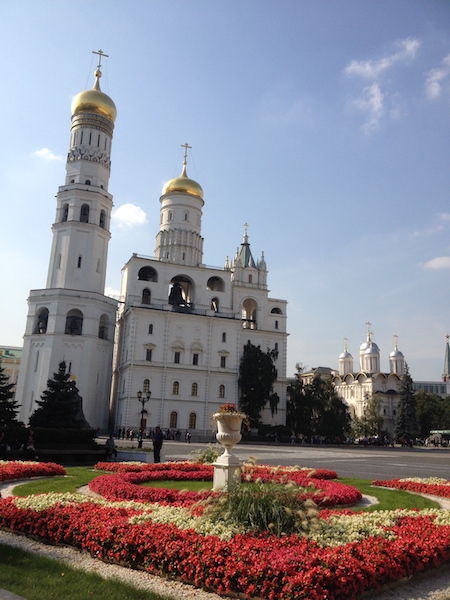 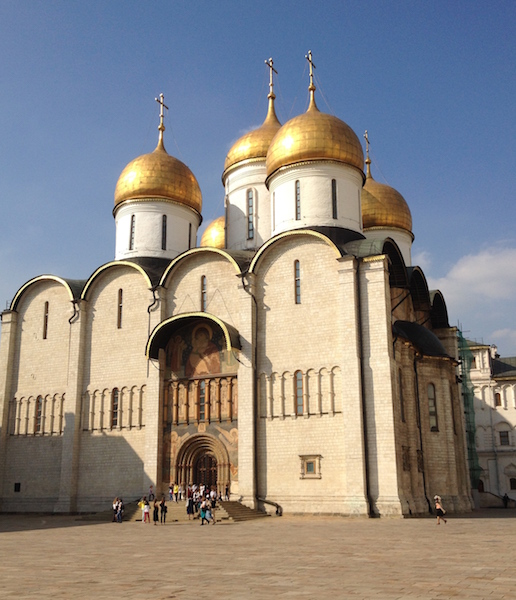 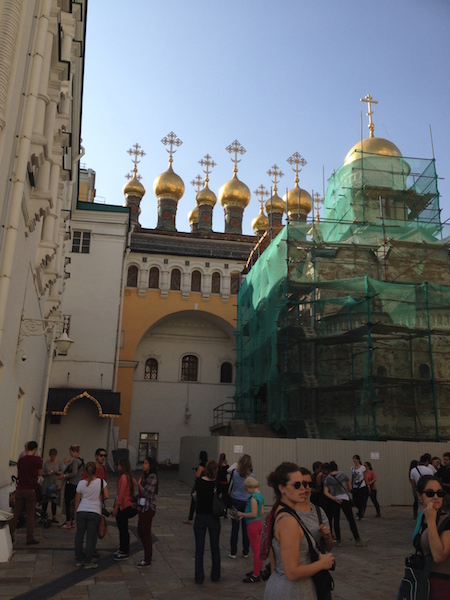 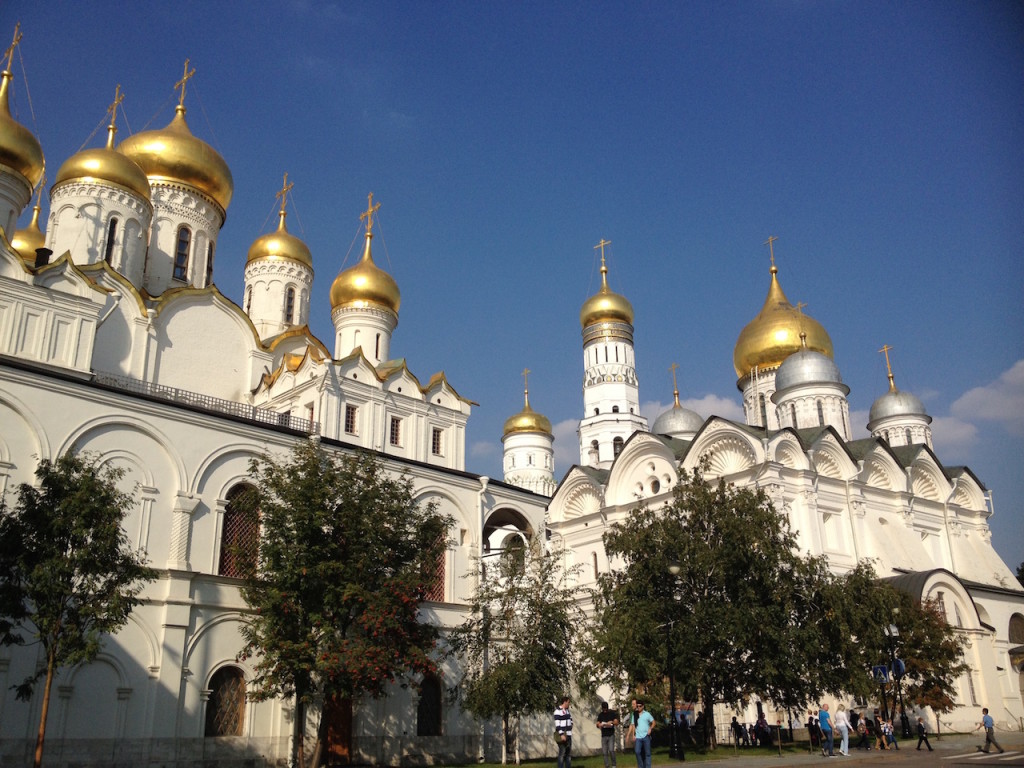 Archangel's Cathedral and Church of Laying Our Lady's Holy Robe

Each of the five cathedrals were empowered by smell of incense. They seemed dark and solemn with gold-plated images all over the walls and ceilings. 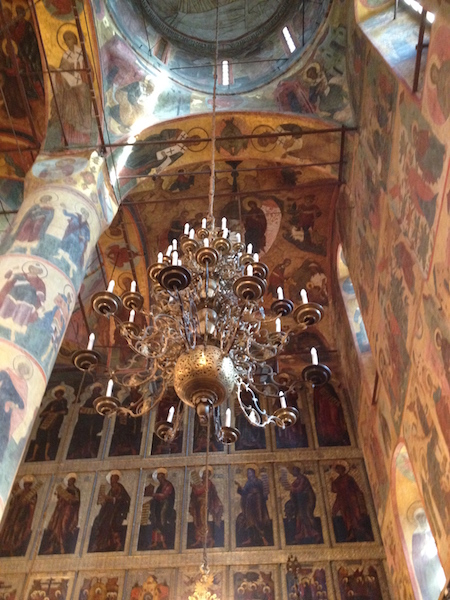 The Armoury Chamber has a set time for visitors. It is the only place to see Russian Imperial Faberge eggs besides those in Faberge Museum in St. Petersburg and Metropolitan Museum in New York City.

Some of the unique exhibits include the Crown of Monomakh, a 1600s orb, Coronation dresses and uniforms, Coronation canopy and royal carriages.

There’s much more to Moscow than the Kremlin and Red Square. If Moscow still brings a shudder, it may be time to rethink and visit the biggest city in Europe- rich in history, culture and ‘mystery’.

Lenin Mausoleum is open Tuesdays to Thursdays from 10 am to 2 pm.