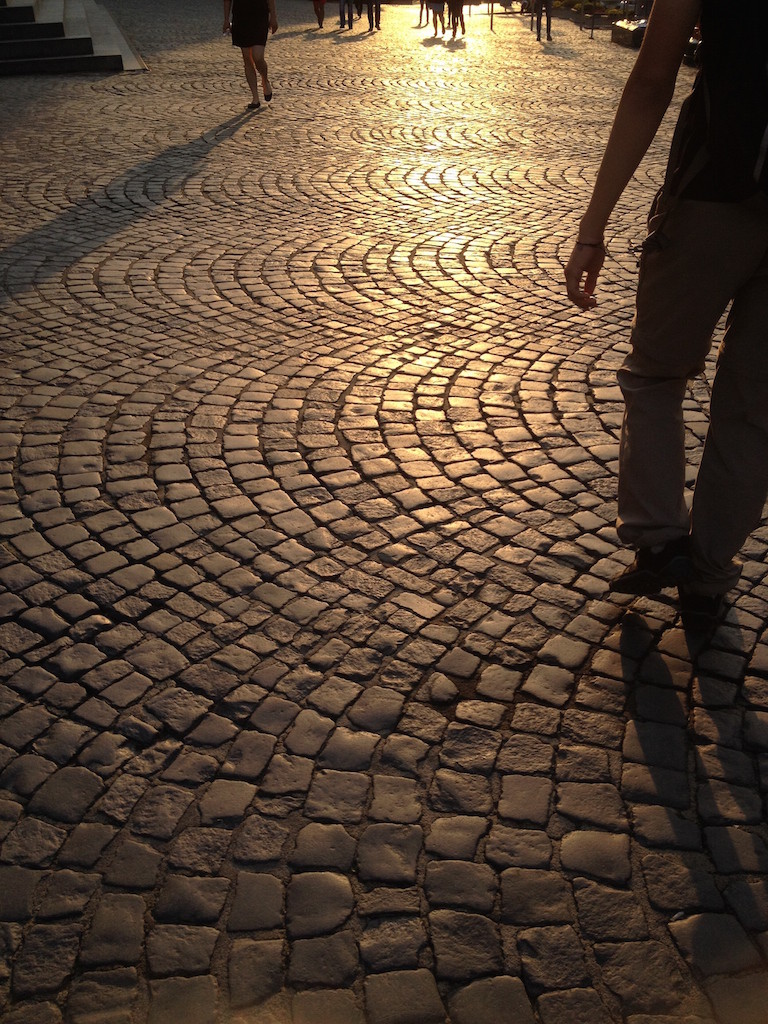 As the tour name implies, the Moscow Communist Tour highlights the history and places impacted by communism from 1917 to Perestroika. Everyday at 4pm just before the evening rush hour, travelers gather at Lubyanka Square, in front of the Solovetsky Stone Monument to meet the Communist tour guide.

We were asked to do the same.

To get there we took the metro to Lubyanka metro station located just under the square. At 3:45pm when we arrived at the square no one looked like tourists at all. I was a little nervous because all communication was via email with Moscow Free Tour Company the day before. Did the group leave without us?

A woman forced us to take her brochure in Russian. It had something to do with an election. As I sat on the green bench, another lady came over and sat next to me. She didn’t look like a tourist to me. Meanwhile my husband and teens were exploring around the park.

The communist walking tour started when Irina arrived with several tourists who already joined her earlier on another tour called the free Moscow walking tour. The Communist tour isn’t free. After collecting cash from all the tourists including us, Irina pointed to the yellow building. She said it was the KGB headquarters. Inside and underground were secret passageways and prisons. Unfortunately we didn’t step into the KGB headquarters or visit the passageways and prisons. 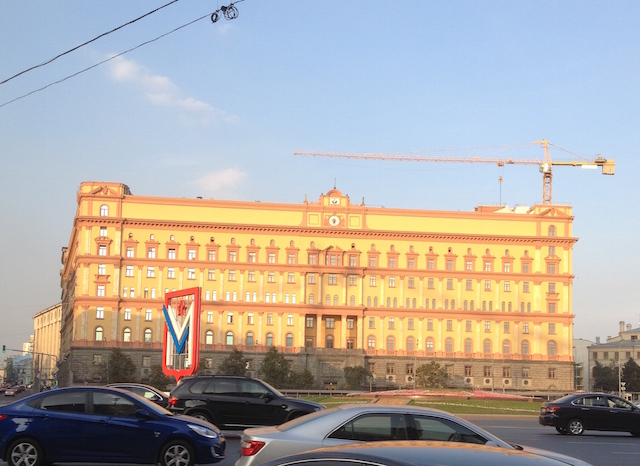 Before we left the square she pointed to the Solovetsky Stone Monument. The monument was constructed to commemorate those who were victims of Soviet-era torture and persecution.

From the KGB headquarters we walked on the Theatralnyy Road to the historic Metropol Hotel owned by the KGB. Known as the Tower of Babel of the 20th century, Metropol Hotel was opened in 1901 with all luxury amenities like hot water, refrigerator, elevators and telephones. Foreign dignitaries that visited the former Soviet Union were housed at the Metropol. 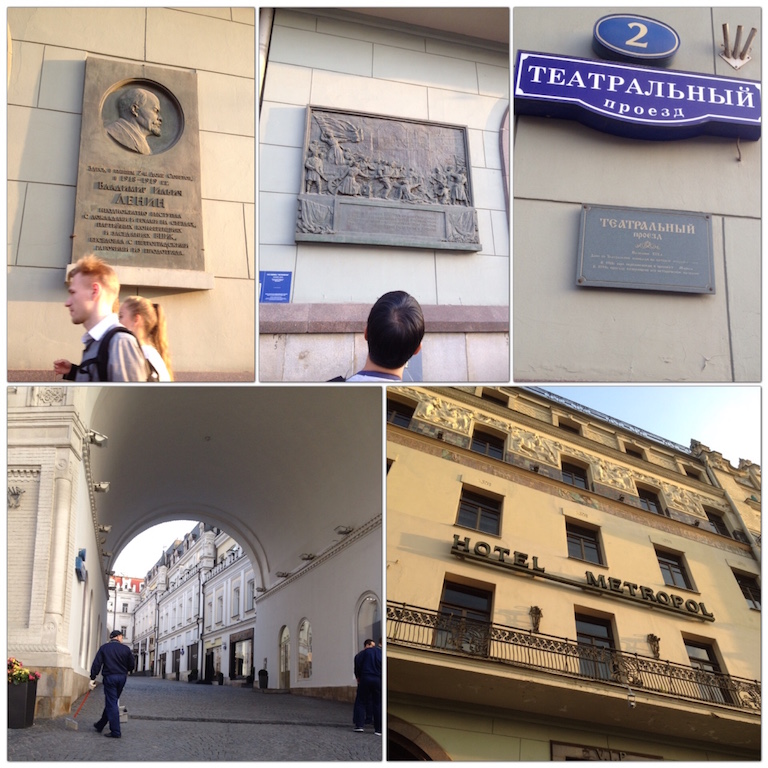 During the Soviet-era the hotel was also called the Second House of Soviets where Chicherin, Sverdlov and Bukharin lived and worked.

Next to the hotel is the Revolution Square, an important square during the 1917 Revolution. 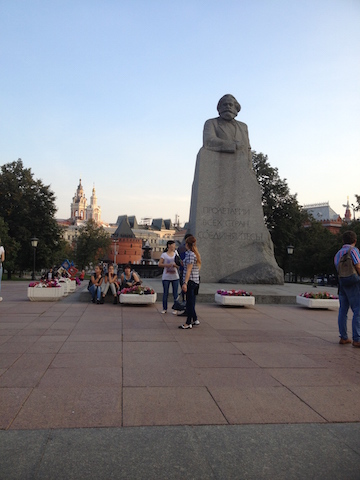 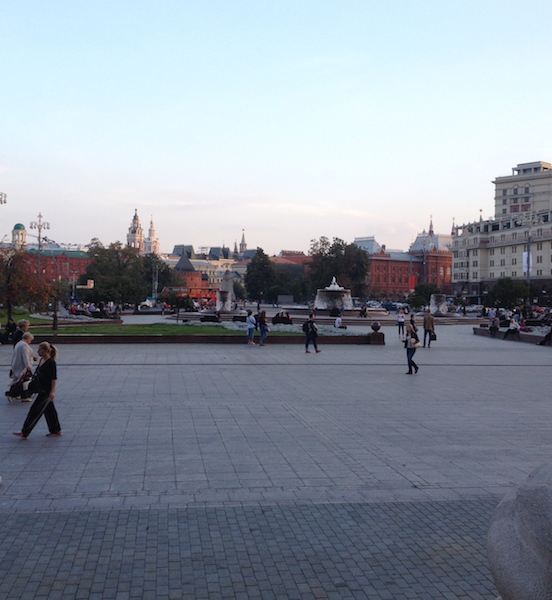 In front of the Bolshoi Theater

Across the street from the Metropol is the famous Bolshoi Theater. We were at the Bolshoi to see the CCCP letters. These are some of the remnants seen throughout the Communist Tour. 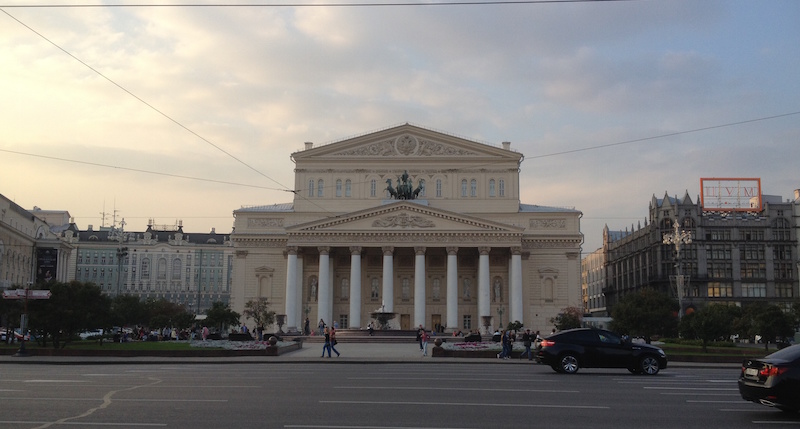 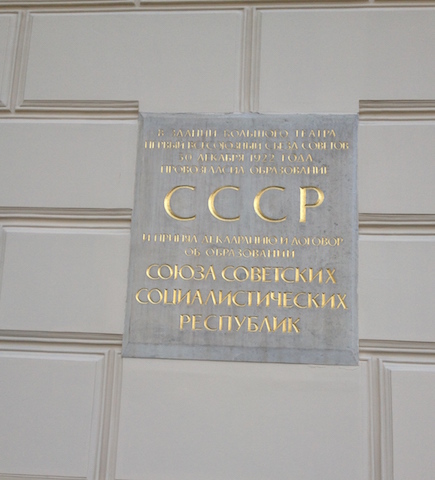 CCCP inscription at the Bolshoi Theater

From there we were told to be aware of the next stop, the Gulag Museum. It would walk deeper into the dark and eerie past of the Soviet-era. While walking, there was definitely no signs of communism. Everything around the area was posh and luxurious. We passed by shops, restaurants, outdoor cafes on Petrovka Street and the intersection of the famous Arbat Street, the pedestrian shopping street of Moscow. 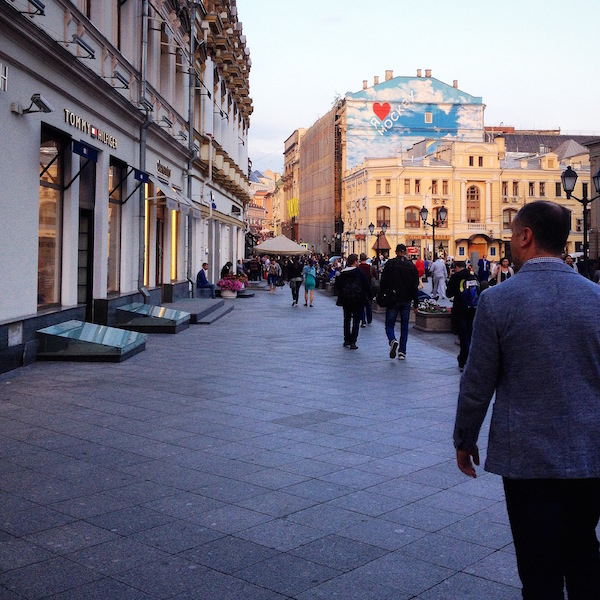 Porsche, Mercedes, Audi, BMW and many more luxurious cars were parked on the street. Not just one or two luxurious cars, there were over 10, all parked in a row outside boutiques and restaurants. 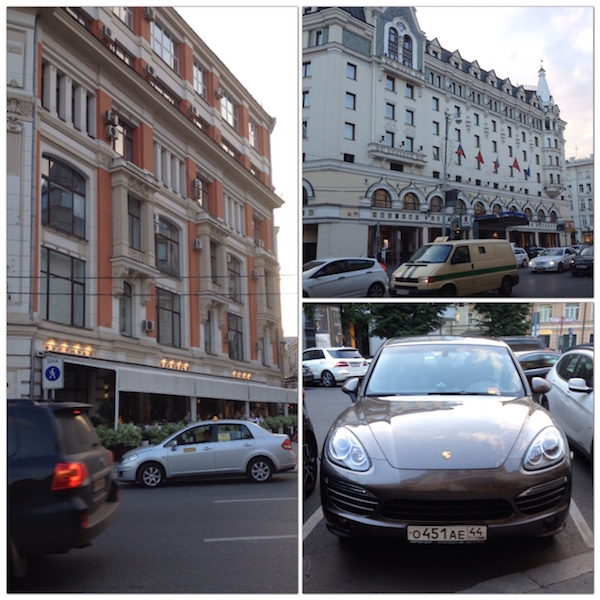 Then there was an archway that led us to a courtyard strung with barbed wire. Portraits of political prisoners were hung all around. It was the entrance to the Gulag Museum. The museum was closed. However I had no interest to get in at all. No photos were taken either at that dark place. 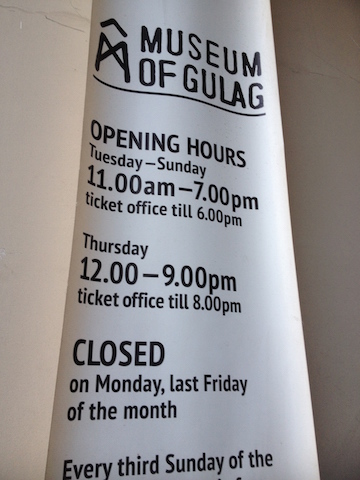 Gulag an acronym for Chief Administration of Corrective Labor Camps and Colonies was the Soviet forced labor camp systems during Stalin’s rule from the 30s to 50s. Countless prisoners spent years detained and forced into hard labor in these labor camps. Today the museum guides are dressed liked the guards.

Just outside the museum the atmosphere was totally different. Russian wealth is looming. As I walked on Stoleshnikov Pereulok street, every shop was showing signs of lavishness and indulgence with stores like Ferragamo, Jimmy Choo, Versace, Prada and the likes. It is the most expensive street in Russia. 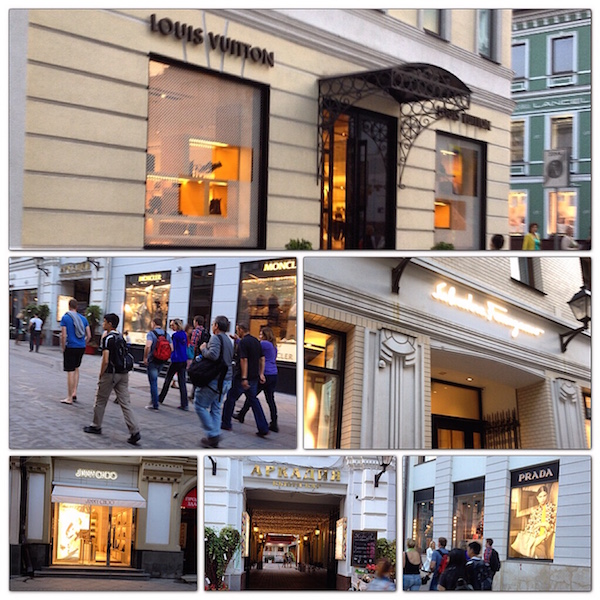 From the lavish street of Stoleshnikov Pereulok we walked to Bolshaya Dmitrovka to view this building which I’ve forgotten the name. This road runs parallel to Tverskaya Street, the main street of Moscow. 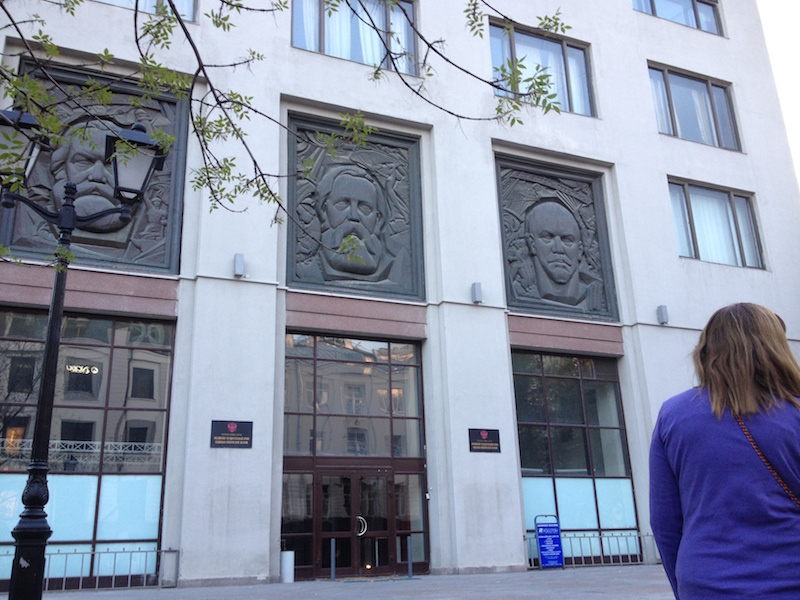 On Tverskaya Street we stop by Moscow Bookstore, one of the oldest and biggest bookstores in Moscow. Inside we went downstairs to look at reprints of Soviet propaganda posters. It was not appropriate to take photos. So I don’t have photos inside the bookstore and photos of the propaganda posters. 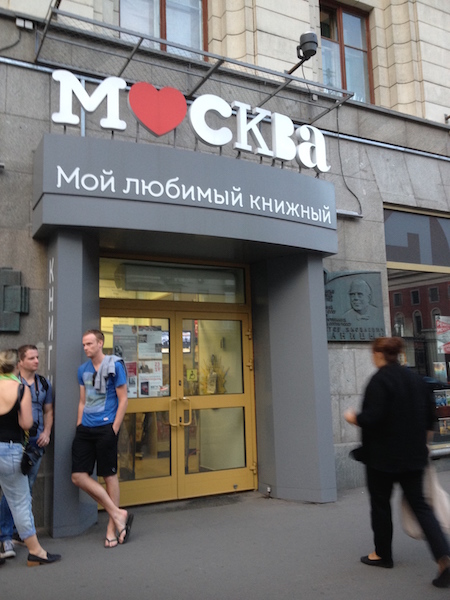 We went to Moscow bookstore to look at old Soviet-era posters. 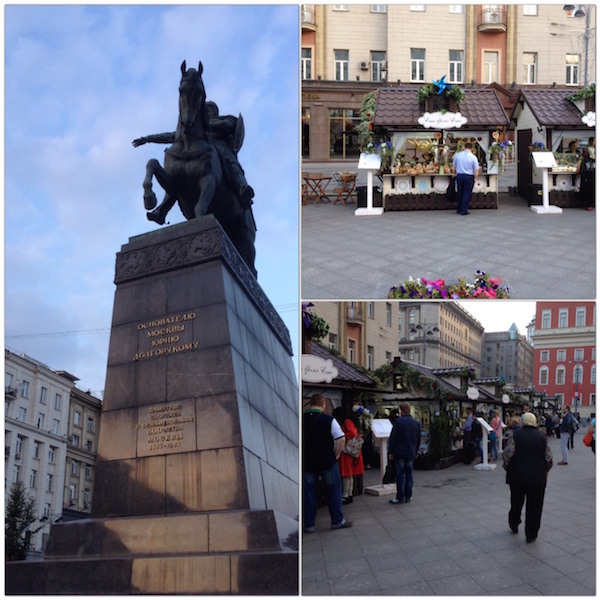 Eliseevsky, the famous grocery store is a must visit store in Moscow. Opened since 1901 and through the Soviet-era, this luxurious grocery sells all types of caviar, sausages, cured meat, cheeses, wine, dips, chocolates and more, just like when it was first started. 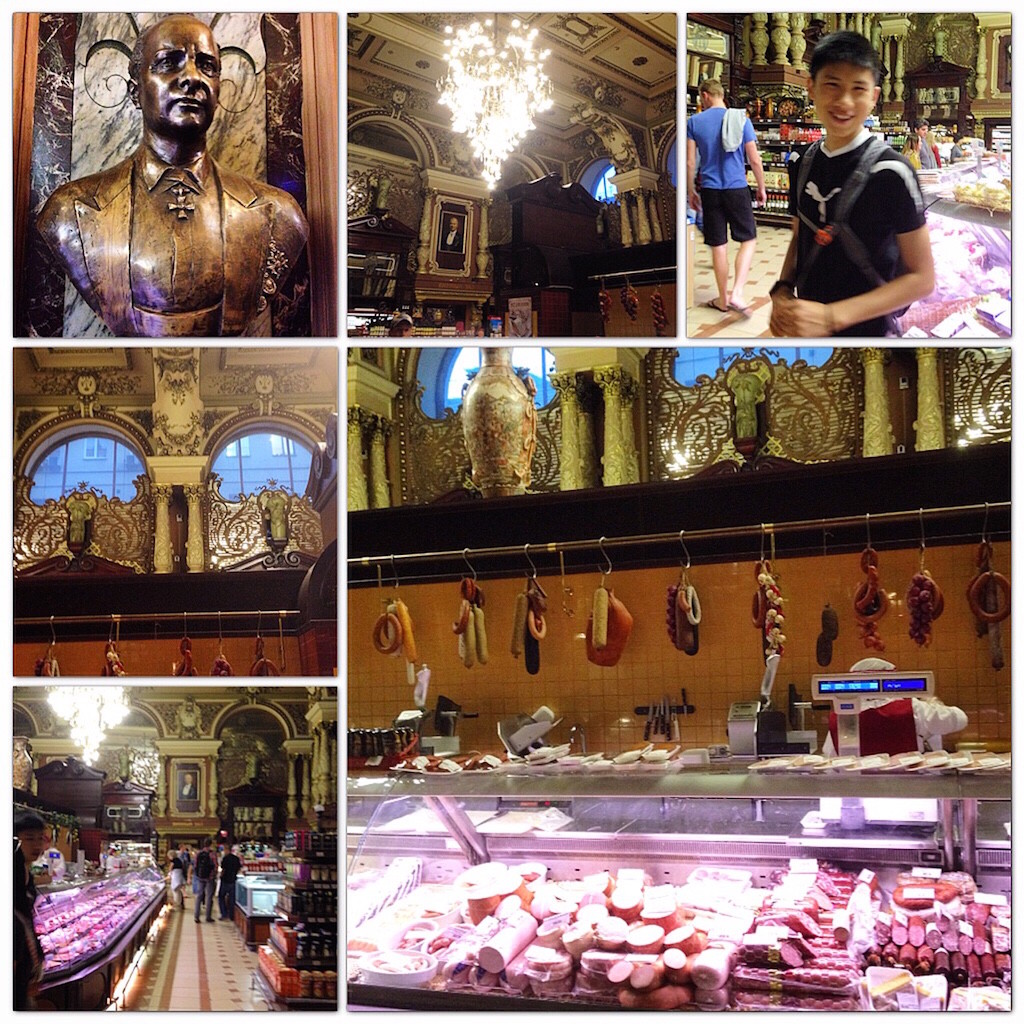 Eliseevsky the famous neo-Baroque grocery store in Moscow. Open over a 100 years ago by Gregory Eliseev. Inside are crystal chandeliers and all sorts of caviar, even Tolstoy wrote about it in Anna Karenina. 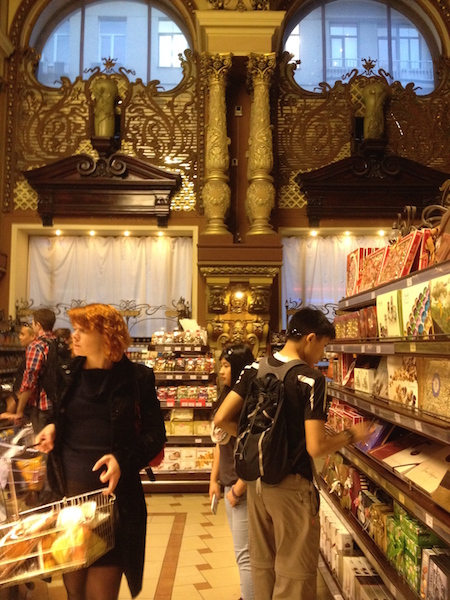 Having no choice and needing to find a toilet we made our way to an Armenian Restaurant across the street from McDonald’s. This is a beautiful restaurant with views of the street and square. The food was amazingly delicious and expensive.

I recommend this tour if you are looking for a tour that provides stories and a two-hour walk around Moscow city center. We paid 950 rubles per adult and 550 rubles per student for the Communist Tour in September 2014.