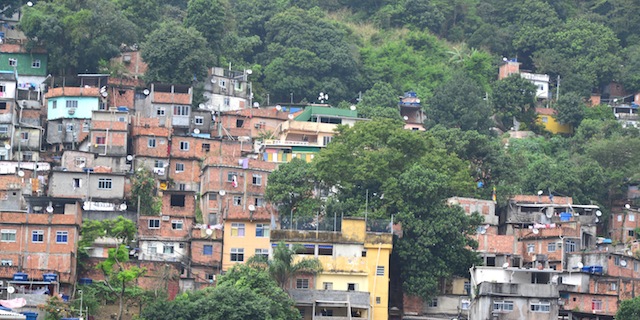 Most houses on the hills are more expensive and exclusive in parts of the United States and the world in general. The houses on the hills in Rio de Janeiro tell another story. Known as a favela, a shantytown, a slum, these colorful houses stacked on top of each other with multiple wires circling around electric poles are not your typical houses on the hill. They may have the best views in the city but the living conditions are quite a story to unravel. 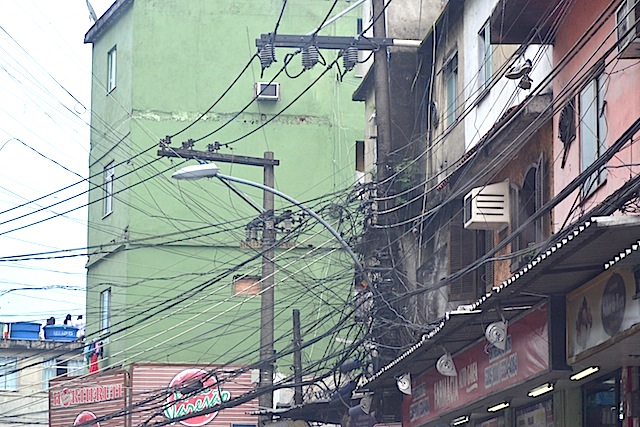 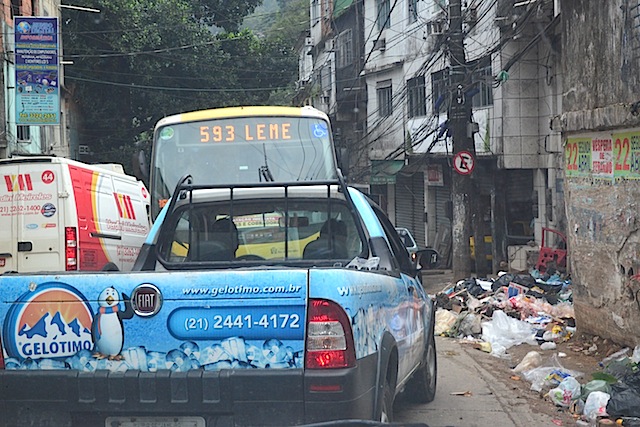 Our guide took his Volkswagen Polo and drove up the hills of Rocinho neighborhood, the largest of its kind in Rio de Janeiro. The winding narrow streets passed through heaps of garbage in the streets' corners, walls covered with words and warning signs about tuberculosis in Portuguese, and most of the time he had to stop because of oncoming cars or trucks. He couldn't turn unless he stopped. At one point up the hill, traffic was at a standstill because of delivery trucks. The cars were within inches from each other. 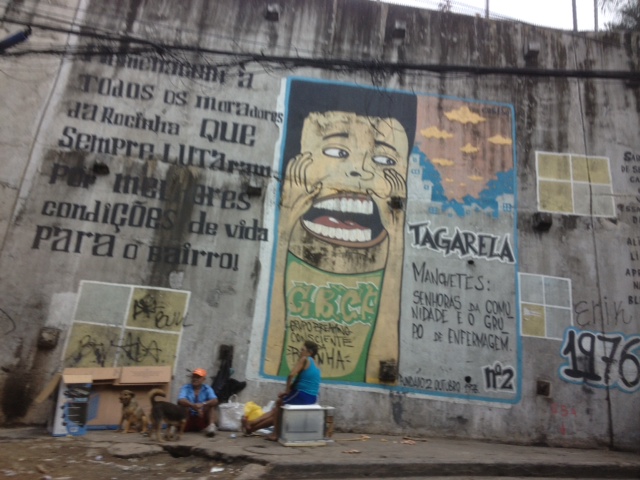 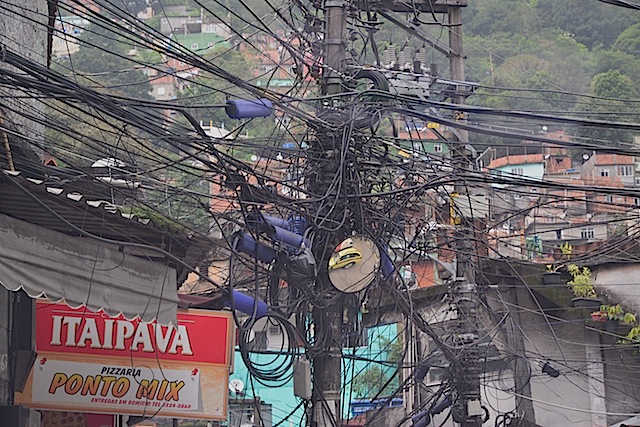 We were not the typical tourists and had no agenda written or the need to buy any souvenirs. All we wanted was to take a walk up the hill or down the hill just taking it all in inside that environment. The car was parked in front of a store and we began to walk down the hill deep into the favela to the less crowded part of the village. The residents yelled and warned us not to take any photos. I was so intensely involved in the environment that I didn't hear or see what was happening ahead until the whole clan (my kids and husband) alerted me.

The guide said, it is time to return to the car since the area seemed deserted. Police vehicles were passing by every few minutes. Of course violence and drugs were common once upon a time. It is now safe to take a tour of some of the favelas. There are many companies now that specialize in these tours. One of those that we found in Rio Guide was Marcelo Armstrong. I did not meet him or use his services. I guess he must be good since the official Rio's Guide Book recommended him. His website is www.favelatour.com.br 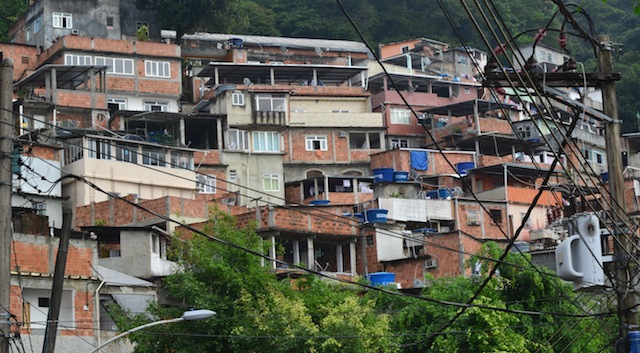 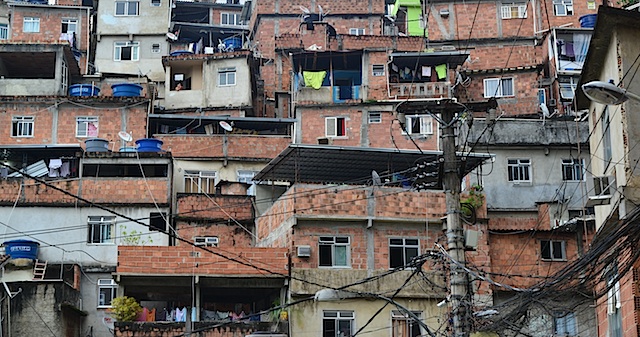 Up on the hills of Rocinho neighborhood was a small hospital. The locals run small restaurants, grocery stores, motorbike repair shops and hairdressing salons. The only way out from the favela is to go downhill to where we started. There was no other way. Men on motorbikes with red vests were transporting passengers up and down the hill. They were the 'taxis' for the favela. Occasionally a public bus went up the hill with passengers going in and out of the favela. 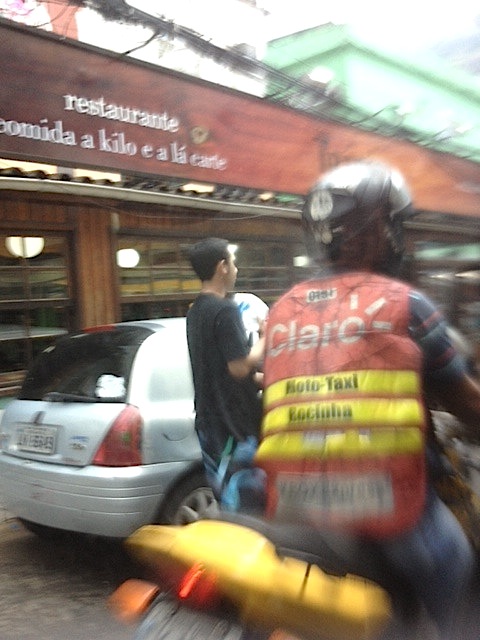 I saw narrow walkways and steep stairs leading to homes up on the hill. The only way to get to some of the areas were either by foot and some by motorbikes. We stopped for lunch in one of the busiest restaurants in Rocinho called Varandas, located close to the entrance to the favela. The place appeared clean and the food was delicious but not as cheap as the one higher up on the hill. At the Varandas they had 'comida por kilo' (food sold by kilograms). 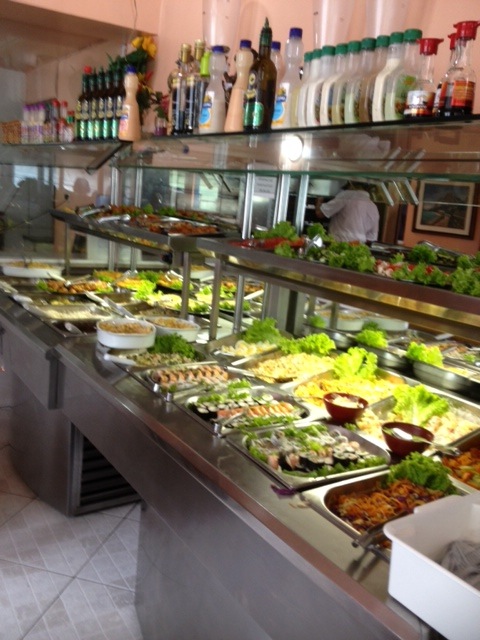 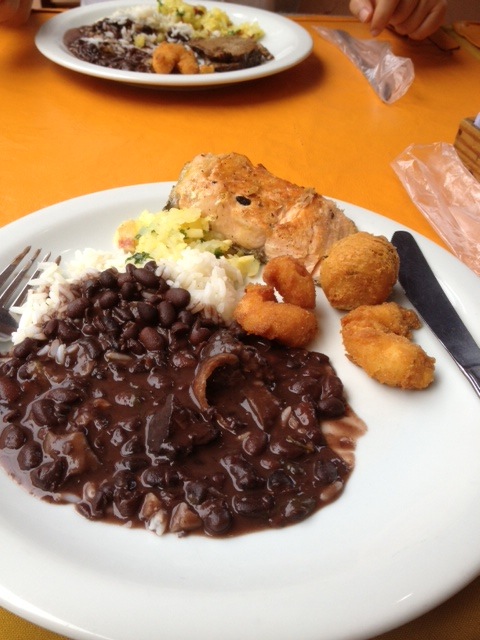 It certainly was an eye opening and depressing experience to visit the favela. There are over 1,000 favelas in Rio de Janeiro existing in every  part of the city. Driving along the highway, I saw another big community called Morro do Alemão located in the north end of Rio de Janeiro served by gondola-typed cable cars. According to a local who stayed in the same apartment complex as us, the cost to go up is R$1.

They said the favelas have undergone major changes in recent years. I saw unsafe wires everywhere, men without shoes, houses stacked on top of one another, dirty streets and stray dogs with diseased eyes and narrow congested streets.

Have you been to the favelas? It is definitely a great cultural experience to see the other side of Rio de Janeiro.