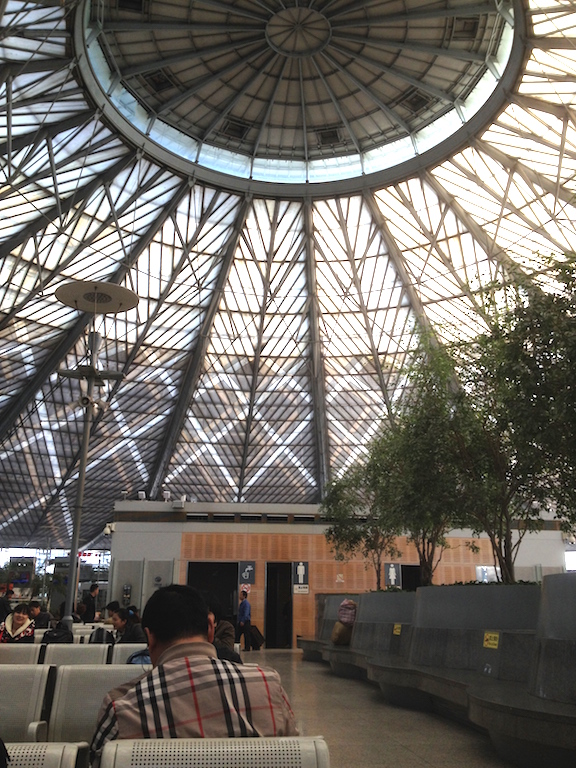 18 hours 13 minutes, that’s the duration of the overnight sleeper train from Shanghai to Guangzhou. Train T169 departs at 11:13 am from Shanghai South Station.

It makes 13 stops before arriving in Guangzhou at 5:26am the next day.

Where to purchase train tickets

You can either purchase at the Shanghai Railway Station located in Moling Road in Zhabei District or pay an extra 5 Yuan per ticket at one of the local train/air ticket agencies.

We attempted to get the tickets at the Shanghai Railway Station and failed to do so because of several reasons. The overbearing crowd at the station was one of the reasons.

So we bought the tickets from a local ticket agent located at the hole-in-the-wall shop at 335 Taixing Road, off Beijing Road (photo below). 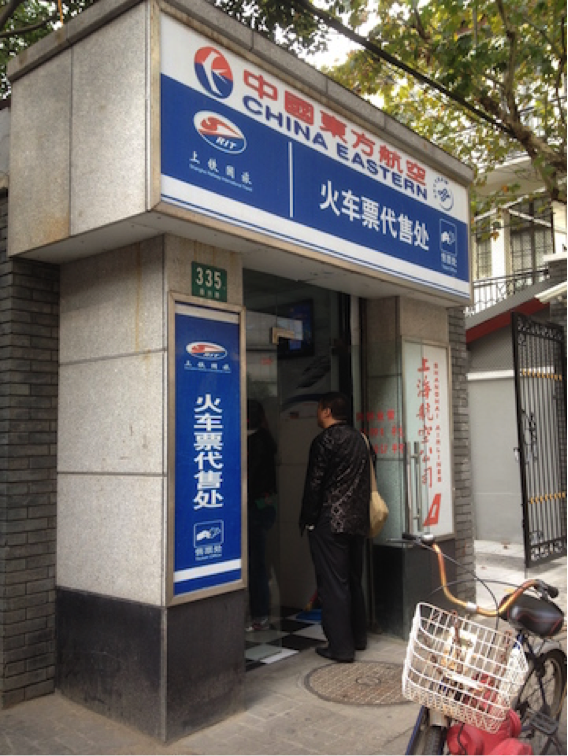 When buying tickets from agents, you will need to pay a service charge of 5 Yuan (80 cents) per ticket. Agents accept cash only and only speak Chinese but offer the convenience of getting train tickets to anywhere in China without the hassle of being jostled by the crowds and encountering queue jumpers at train stations. I highly recommend the service provided by the agents.

While in Guangzhou we had the concierge at the hotel purchase the train tickets for Guangzhou to Hong Kong. Which means we would be able to do so anywhere in China including in Shanghai. 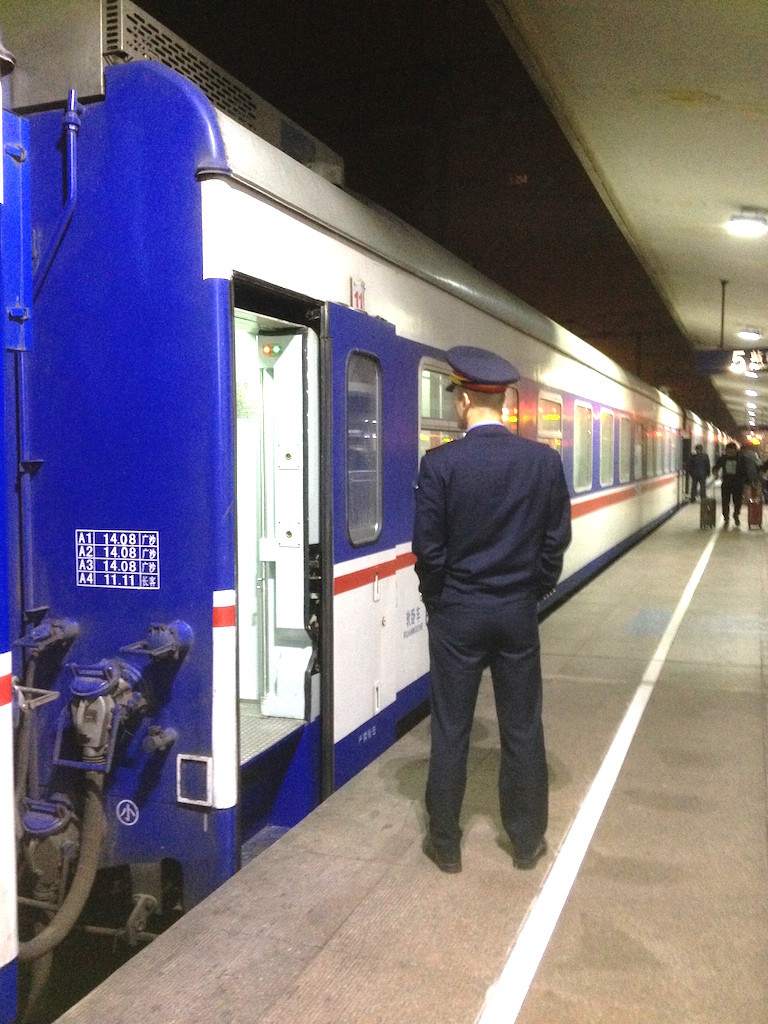 Types of trains traveling from Shanghai to Guangzhou

The G trains are the high speed trains in China. It takes around seven to eight hours from Shanghai to Guangzhou depending on the departure times. Train G85 that leaves at 8 am from Shanghai usually takes just under seven hours while G1301 departing at 10:28 am takes eight hours 35 minutes.

D trains, also known as overnight high speed sleeper, take over 11 hours. We took the T trains, which are the regular trains and are the cheapest and slowest trains. Each soft sleeper train ticket was 584.50 Yuan (about $97 per ticket).

Buying train tickets at the railway station is not that simple in China because they have set dates to purchase tickets depending on the category. For example the G trains are open for purchase 10 days before departure and the K and T trains are only open five days before departure. You will face quite a challenge if you are traveling during the Chinese special holidays like the Golden Week.

Our family had a cabin with two upper and two lower berths just like the Trans Mongolian trains from Moscow to Irkutsk, Irkutsk to Ulaan Bataar and Ulaan Bataar to Beijing. The car had a hot water station and one bathroom at each end. One huge difference was the locals were smoking non-stop between cars. Unfortunately, we had to endure the smell of cigarette smoke for over 18 hours.

Once inside the train the attendant collected our tickets and gave us each a gold plastic card with car identification. These were returned to the attendant when we arrived in Guangzhou. 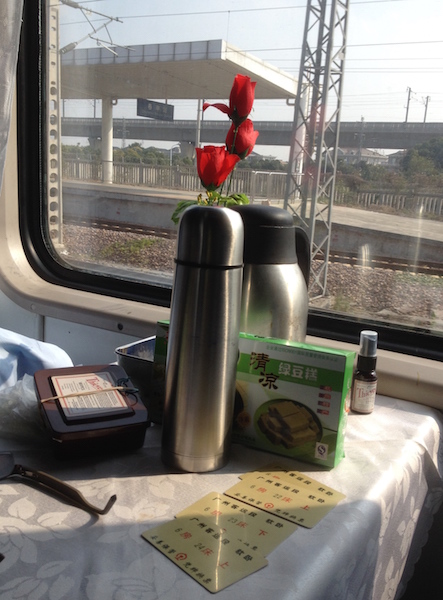 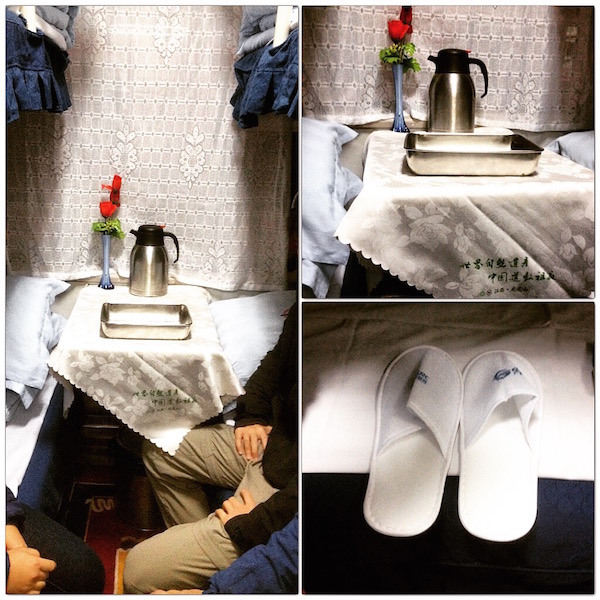 Inside the car and a pair of slippers for each passenger

Constantly, you'll get workers from the dining car pushing carts filled with boxes of cooked food from car to car. Instead of buying the cooked food we had the regular train food – instant cup noodles. 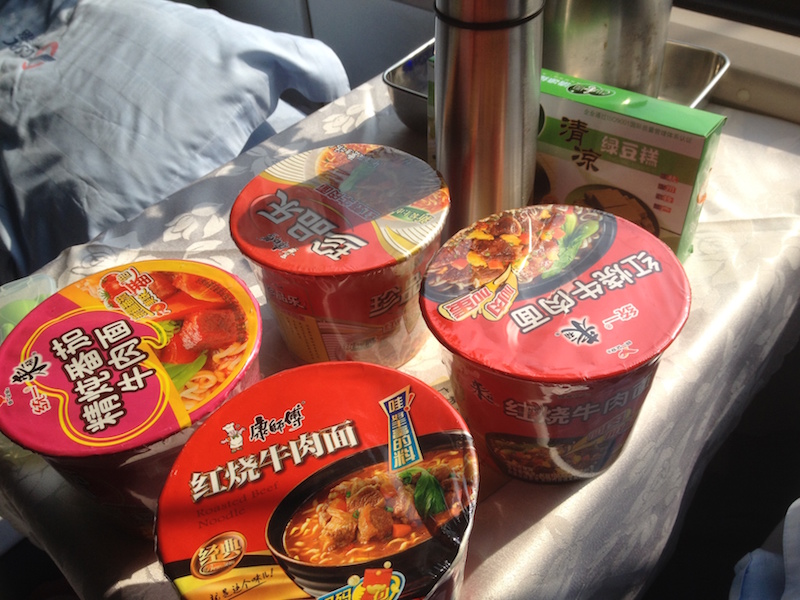 Why train from Shanghai to Guangzhou

Since we started our journey from St. Petersburg by train to Moscow and beyond, we decided to take the trains all the way through to Guangzhou and Hong Kong.

Taking a train from Shanghai to Guangzhou was cheaper than the one way air tickets. We saved around $600 per family by taking the T train. The train took us through cities and villages south of Shanghai that we may have never seen if we flew. It was the best way to travel with the locals.

We paid more than double the price at 68 Yuan for a short cab ride from Guangzhou station to Fraser Suites Guangzhou.

If you are traveling alone I would advise not to take T169 because of the arrival time. Cab drivers are not the best people to encounter in the dark especially in an unknown city if you don’t speak the language. I say that because even though I speak Chinese, our family was dropped off at a mall instead of the front door of Frasers Suite Guangzhou at 5:45 am.

The hotel is only accessible through the mall during opening hours. He should have dropped us off behind the mall. That said, if you are alone, take the D overnight sleeper train that arrives in Guangzhou at about 7 am.