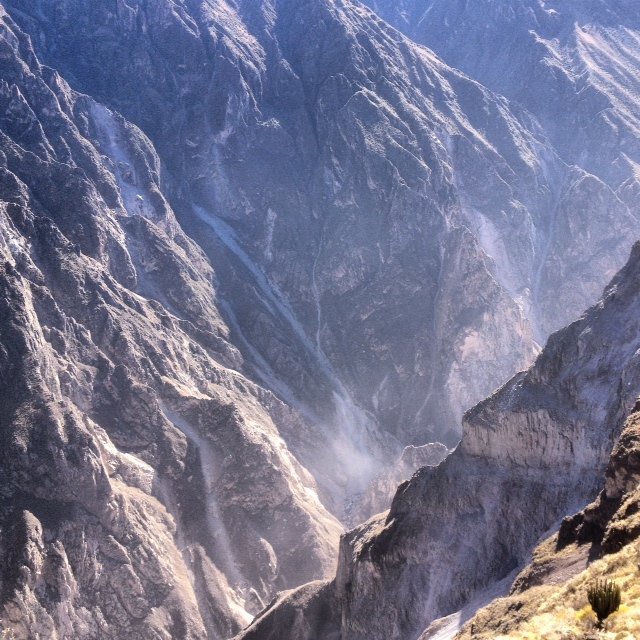 This article is an excerpt from my eBook, Peru: From Machu Picchu to Cusco to Nazca Lines to Lima.

From Cusco, we traveled south to Colca Canyon and the villages in Colca. Tours to Colca Canyon are usually taken from Arequipa, the second largest city in Peru. However, our tour was a continuation of an extensive 31-day trip, and we went to Colca Canyon from Cusco before Arequipa.

This part of the tour was one of my favorites in Peru because I was at 16,000 feet above sea level without the need to climb up treacherous terrains. 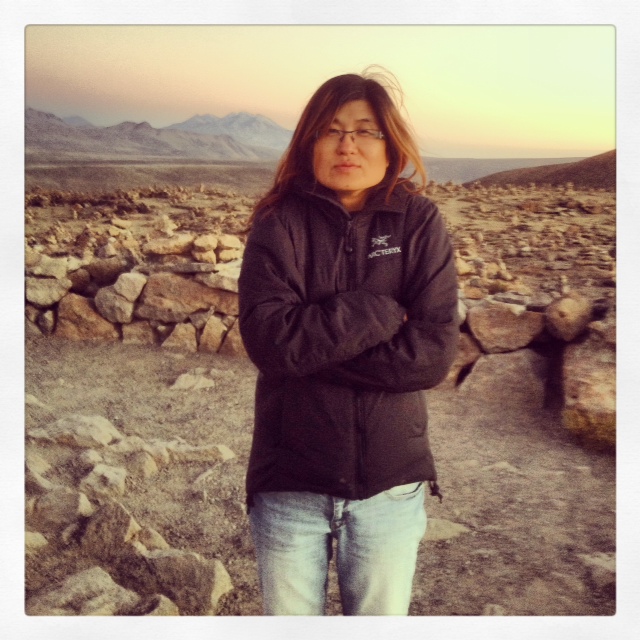 The journey on the well-paved road leading to the top at Mirador de los Andes is worth a mention here.

Our first stop was at Mirador Alto Lagunillas, a lookout point at 14,478 feet (4,413 meters) elevation. At this elevation, there were hardly any trees or farms,  just the occasional homes dotted along the road with alpacas and llamas grazing on patches of plants grown amongst the rocky soil. We spotted a few flamingos by the lake too. 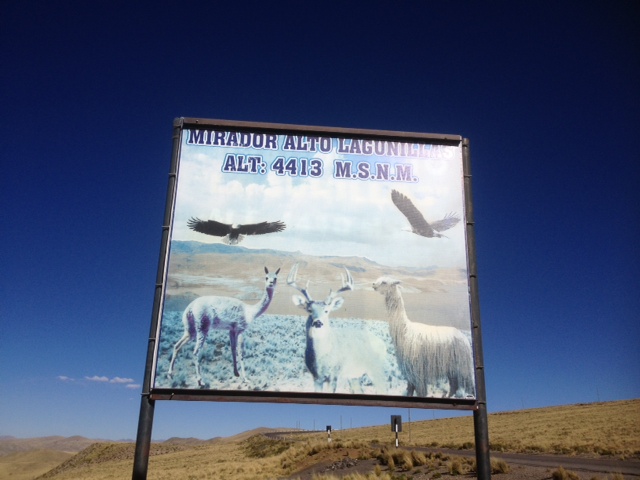 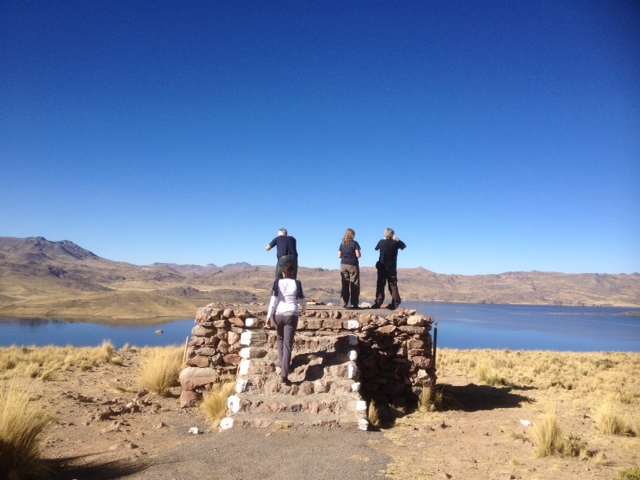 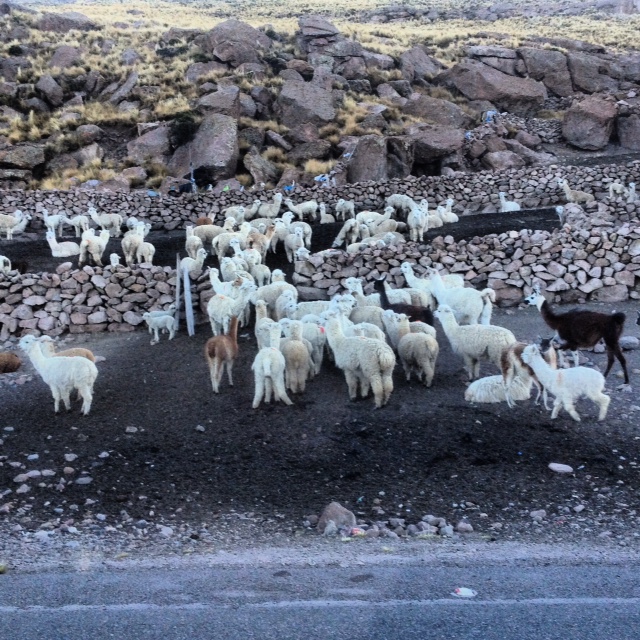 Another attraction along this route was the vicunas running in their natural habitat. Llamas and alpacas were easy to spot in the Andes. The vicunas were relatively rare to find on our 31-day journey throughout the highlands of Peru. The driver said we were winding through the edge of Salinas and Aguada Blanca National Reserve, a reserve created in 1979 to preserve vicunas' natural habitat. Tours are available to the reserve where you can view vicunas, flamingos, alpacas, llamas and several types of native birds.

Vicunas are protected animals in Peru. In the 1960s the Peruvian government recognized the importance of preserving these endangered animals from poachers. One kilogram of vicuna wool could bring in about $1,000. According to a report, in 2013 alone, 300 vicunas were killed by poachers. 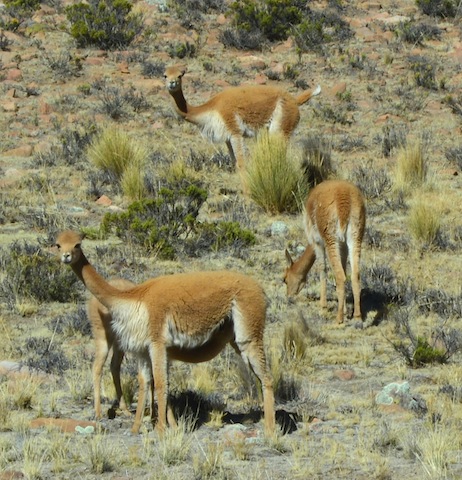 After seeing miles and miles of scrubland, we arrived at the peak. Mirador de los Andes (Andes Lookout), at 16,108 feet (4,910 meters) above sea level, the highest elevation I’ve ever been at.

Nothing could compare to the feelings of being at the same height as the snow-capped volcanoes. Surrounding Mirador de los Andes (Andes Lookout) are five volcanoes - El Misti, Ampato, Sabancaya, Chucura and Hualca Hualca.

It was brutally cold and windy, and with three layers of clothing, I was still shivering. The air was thin, and I could feel the lack of oxygen. I could barely breathe in that treeless, grassless, rocky lookout point. The quietness at that elevation was beyond any I had experienced. The silence brought out a sense of the sacredness of the place. I felt as if I needed to sit down or do something to pray or meditate. 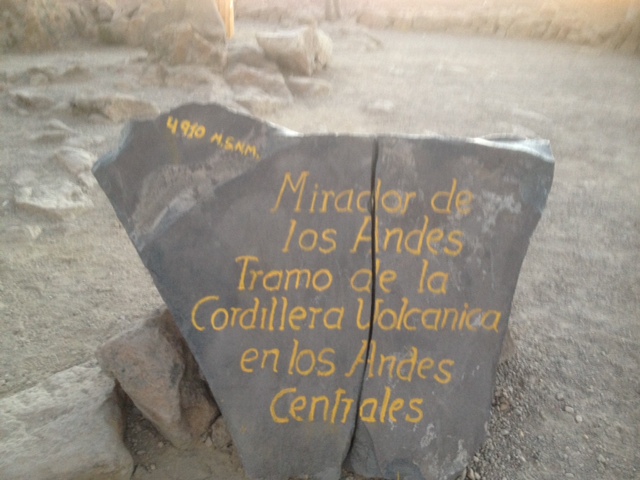 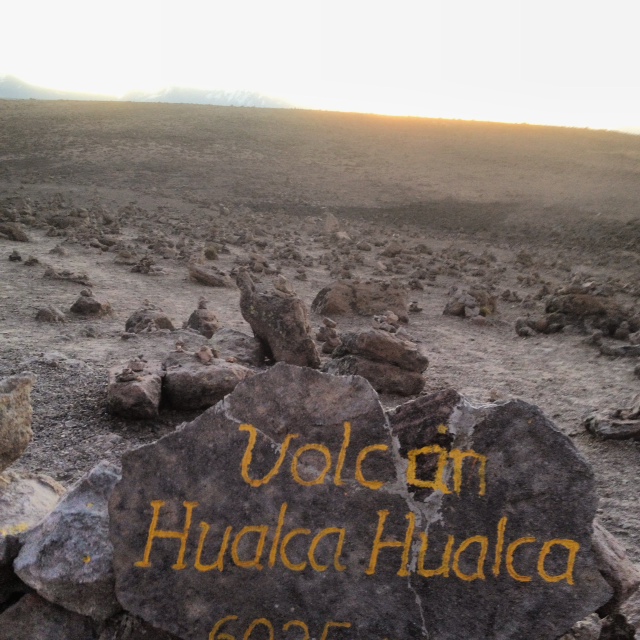 This part of Peru is also known as the Patopampa Pass.  The sky was already turning gray, and we were hoping we could catch the sunset. We arrived near the end. The local vendors that usually hang out in the area were gone since the sun had already set. There was no one else except our group of 12, the guide and the driver.

From this point on, it was time to descend towards Colca Canyon to the town of Chivay. The guide said that there were no roads here before the 1940s. Silver and copper mining in the 40s brought about the construction of highways. More roads were built in the 70s and 80s when there was a need to direct water from Colca River to the Majes Region for irrigation.

Some of the roads in Colca Canyon are still unpaved. We were expected to travel on dirt and gravel roads the next day to Colca Canyon to see the Andean condor.

Chivay is the main town in Colca Canyon. Located in the Valley at 11,926 feet (3,635 meters) above sea level, which is higher than Cusco, Chivay is the gateway to all the attractions in the Colca Canyon region.

We stopped by twice in Chivay, first on arrival during the night to go to the ATM and shop, and the next day for a short tour before leaving for Arequipa. There are many restaurants, stores and street vendors in Chivay. Like all towns and cities in Peru, Chivay has its own Plaza de Armas (town square) and a cathedral. 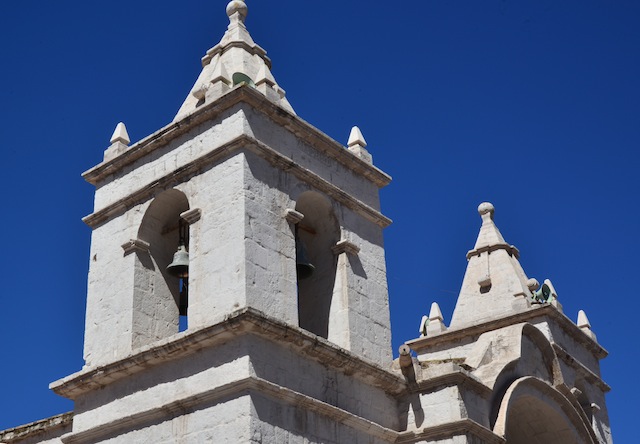 There is an active bullring in the town too.

We stayed at the Hotel Mamayachi in Coporaque for a night. It was one of the nicer hotels in the Andes. Terraced fields and mountains surround the hotel. The sitting and bar area had a wood fireplace, and the dining room had Andean furnishings. 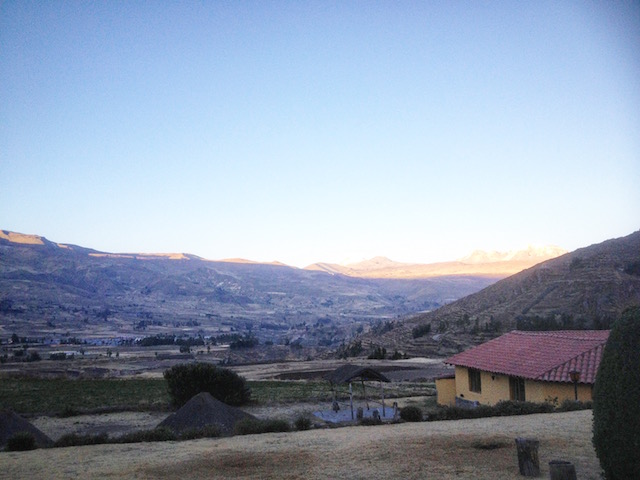 There was nothing much in Coporaque village except the two statues of a courting couple at the bottom of a flight of stairs. Olivia, the tour guide pointed out: the man dressed like a woman. The man had his face covered so nobody could identify him because courting was not allowed. 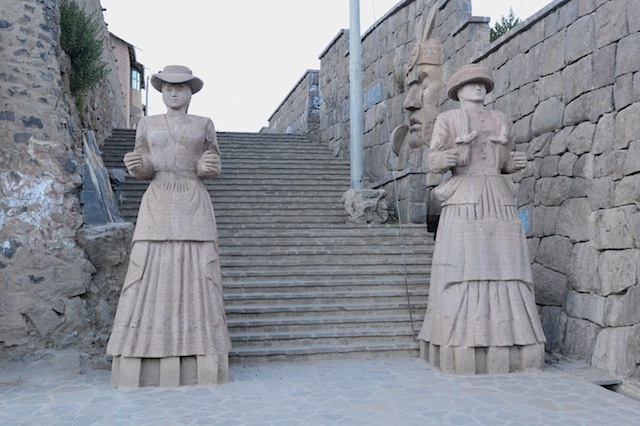 Colca Valley has 14 villages. One of the common denominators in each of these villages was a church. The colonial churches were built in the 16th century with Franciscan and Dominican influences, mixed with Andean culture. Many of the villages still maintain a strong tradition and religion of the Pre-Inca era.

The local women wear traditional clothing. They are descendants of the Cabanas and Collaguas people. You can differentiate the ladies by the type of hat and clothing they wear. The Cabanas wear sequined and embroidered hats, and the Collaguas women wear straw hats with colorful ribbons. 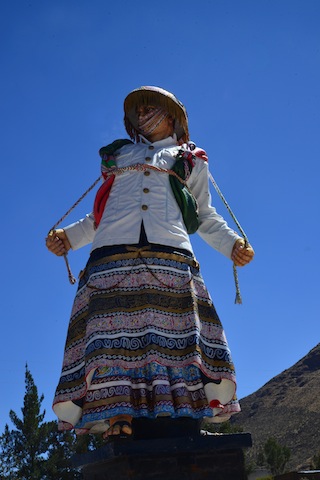 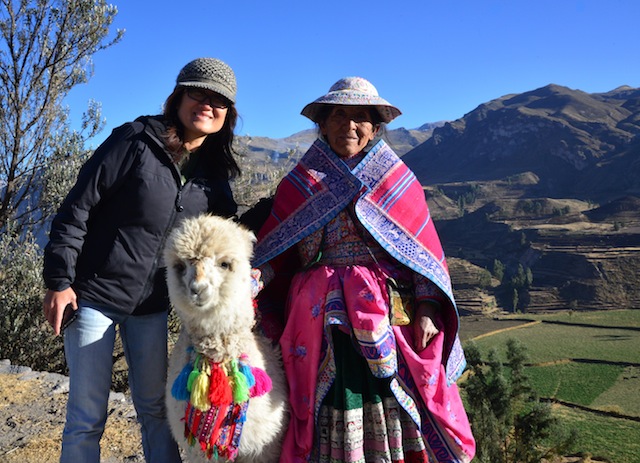 Before the 1970s, Colca Canyon and Colca Valley were not discovered by tourists. A few rafters first visited it and then an American group came in and started mapping the place.

Surrounded by terraced fields and mountains, some of the residents in the villages still maintain their land and lifestyle like their ancestors. Many of these terraced fields can be traced back to the Inca times - growing potatoes, quinoa and all types of beans like the ancient times. I love looking at these terraced fields with snow-capped volcanoes in their background. 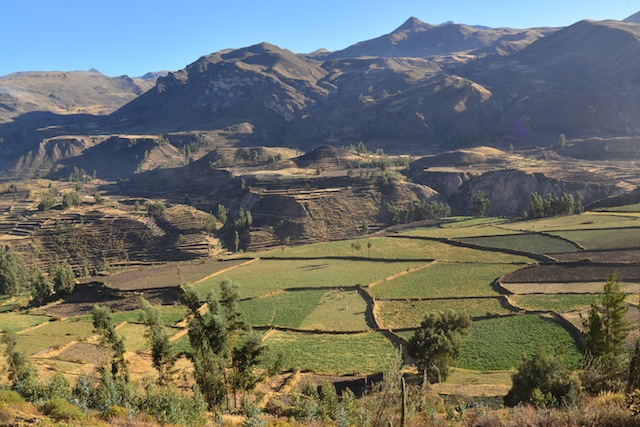 Colca Valley is one of the most beautiful areas in Peru. The combination of snow-capped volcanoes and the multiple shades of green of the terraced fields are unique to this region of Peru. 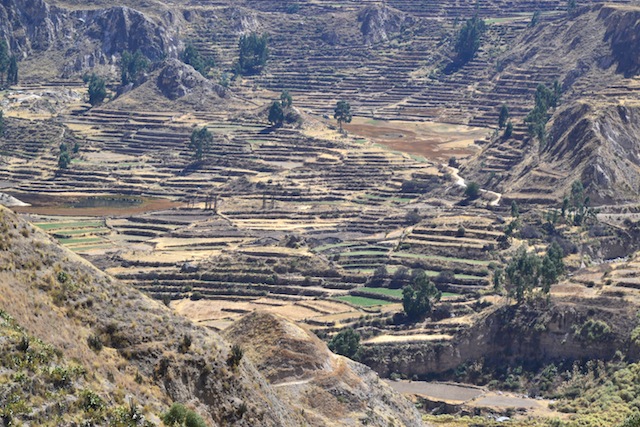 The volcanoes surrounding Colca Valley are still active. In 1995 when Volcan Ampato erupted, archaeologists made the most surprising and important discovery about the Inca Empire and the ties between the people in Colca Valley and Cusco. They found a frozen Inca Maiden sacrificed at a young age during the Inca era. They named her Juanita. Today Juanita is in a museum in Arequipa.

Colca Canyon and the Andean condor

Our journey through Colca Valley villages to Colca Canyon was mostly on rocky, uneven, winding and unpaved roads. We passed through several lookout points where we could view the villages in the valley. But the most important agenda of the day before 11 a.m. was to get to Cruz del Condor (Condor Cross), to see the condors in their natural habitats. Sightings were not guaranteed, said the tour guide. 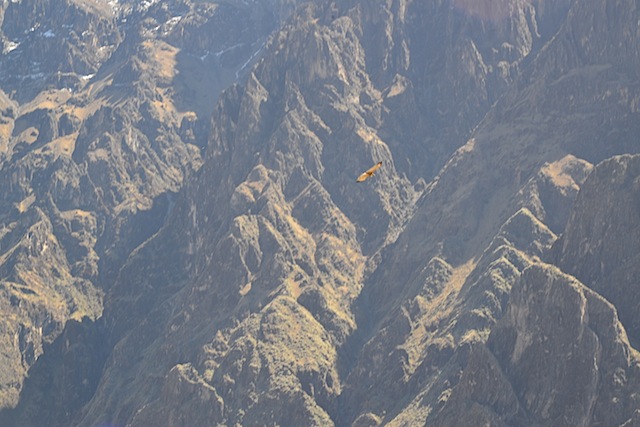 Colca Canyon is the deepest and narrowest canyon in the world. The tour guide gave us two choices: hike for 40 minutes in Colca Canyon to see the condors or take the bus to Mirador de Wayracpunku to the viewpoint. We did the hike while my daughter who was sick at that time did the panoramic view at Wayracpunko (wind gate) without the need to hike.

Guess who saw the most condors?

My daughter had a fantastic time seeing over 15 to 20 condors flying around the viewpoint. Those who hiked with me saw one junior condor and a few falcons. We rushed to the platform and managed to view them from far and by the time we arrived at the scene, the “show” was over. 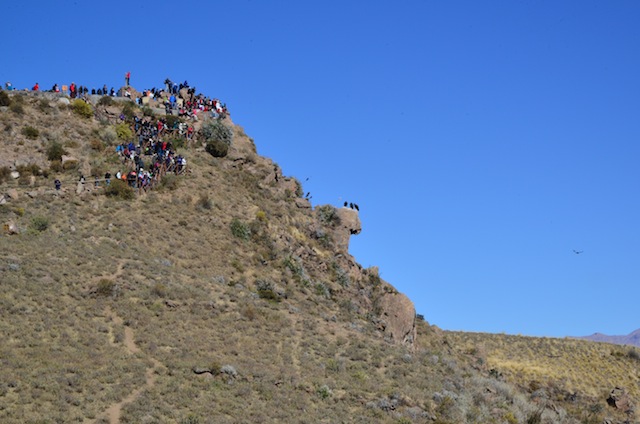 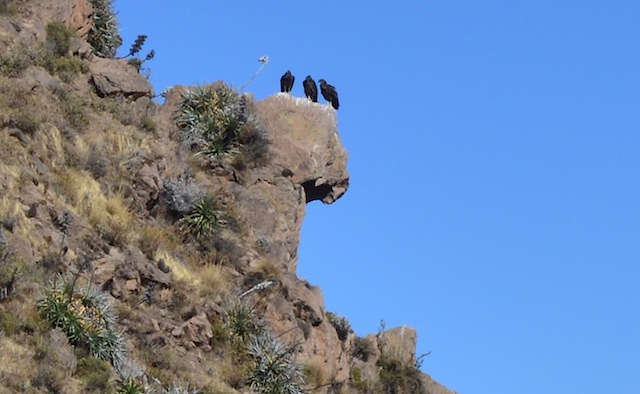 The adult Andean condors have a six-foot wingspan. They fly out from the canyon crevices and circle Mirador de Wayracpunku. There were at least 200 tourists at the Mirador (lookout).

1. The dry season is from April to November, can be the best season to see condors.

3. Condors are endangered species, and there are only about 6,200 Andean condors in South America.

4. Colca Canyon is one of the best places in Peru to get close to the Andean condor.

5. During the Inca times, condors were sacrificed and were used as a symbol of power and for medicinal purposes. Condors are endangered because of these reasons and also because breeding only occurs in alternate years, and if they live in dangerous conditions, breeding may not happen.

6. Andean condors are monogamous, and the pairs will select a cave for nesting at the beginning of the breeding season. After the females lay egg, both the male and female will incubate it for about two months. 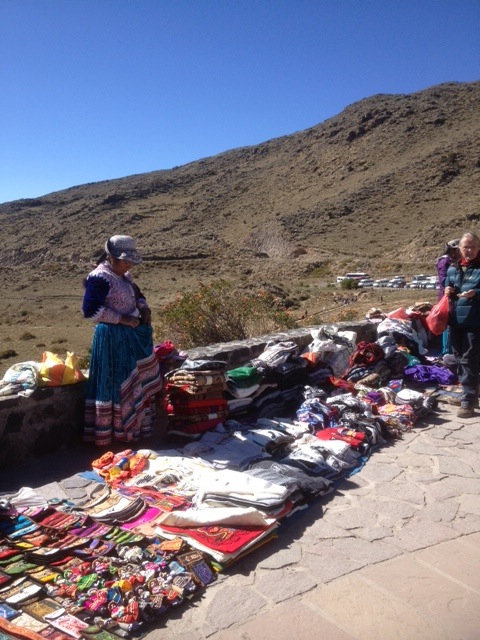 After the viewing, we headed to a local market and church in Maca. Maca had the most beautiful church in the entire Colca Valley. Unfortunately, Maca is deteriorating because of the changes in the landscape in recent years due to volcanic activities.

There were ancient barns, terraced fields and adobe homes in Maca. Some of these homes grew cacti on the stone fences to protect the walls during the rainy season so that the wall would not crack. Another reason was to protect their home from burglars. 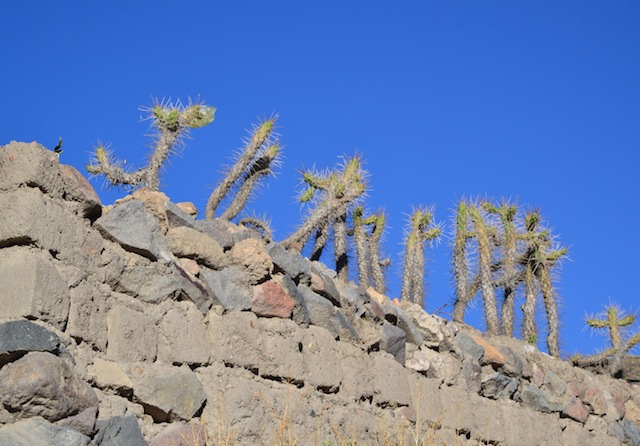 Our last stop was Chivay where we had lunch and a walk around the town including visiting the bullring.

Read more about Peru trip ideas in my eBook: 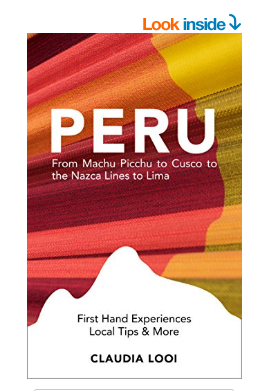