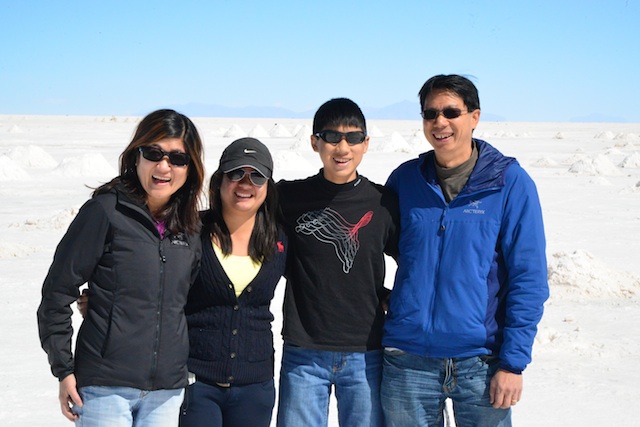 Our driver knew exactly where he was going as he drove on this roadless white surface that seemed endless. When asked how many times he drove through this open white space, he said four times a week in the last 25 years. With that answer, I felt safe traveling with him and the cook behind us. Obviously he knew his way pointing at the mountains and the city as he drove in silence.

Uyuni Salt Flats is the largest in the world with a surface area of 12,000 square miles. The only way to get around is with a four-wheel drive. Our guide said salt flats consist of many layers with different thickness and layers, from two to 10 meters and have approximately 11 layers. It was once a part of the sea along with Lake Titicaca, Lake Poopo and Coipasa.

Workers were still harvesting salt. Here we visited a traditional salt plant that produces salt for Bolivia. During our visit, workers were digging and making piles of salt to be transported to the many plants in the area. I felt the intensity of the sun as I walked on this vast white land and thoughts like, "will this surface melt...as if I was walking on ice." I had to remind myself it was layers of salt not ice I was walking and standing on. 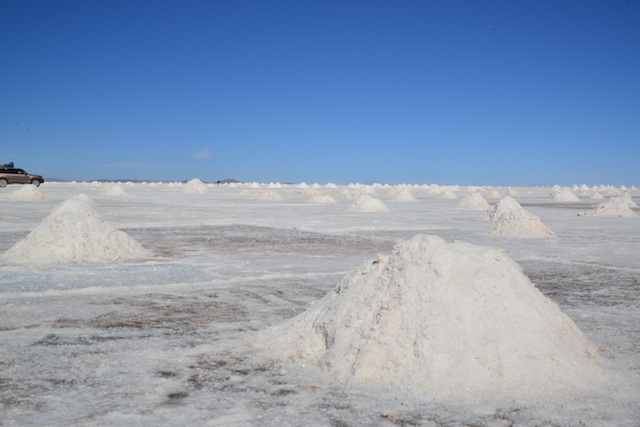 We visited a salt producing plant and my son was giving a helping hand during the demonstration. 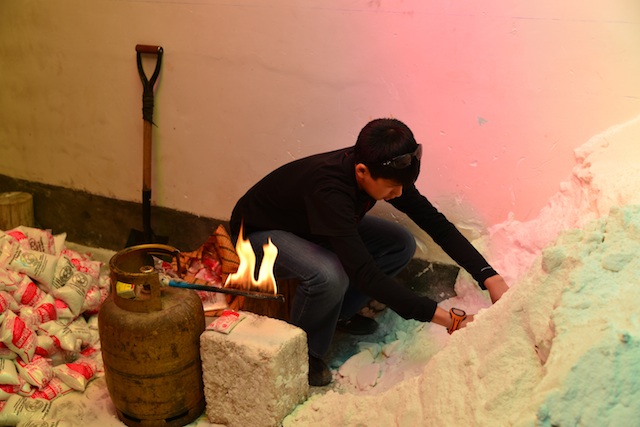 While walking out of the toilet at the salt plant, a little girl ran up to me and wanted a hug. I was taken by surprised! 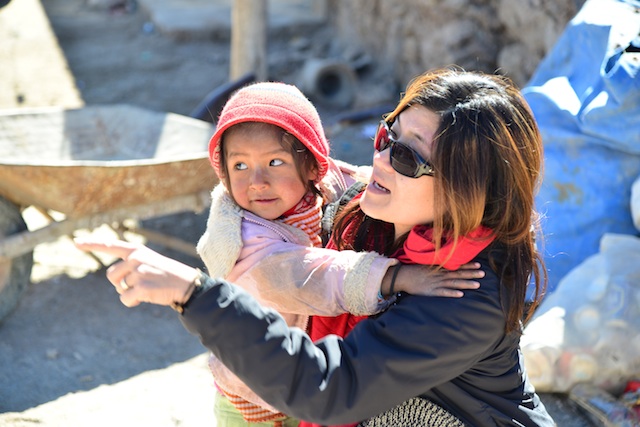 Salt Flat is not just a plain flat surface. Look at the shape of the surface here: 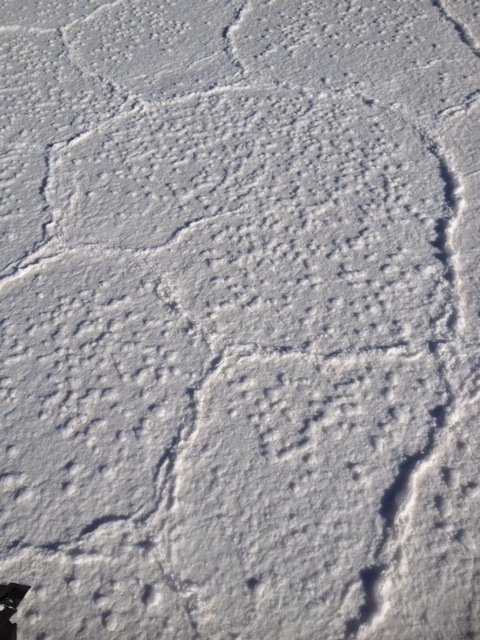 There are geysers, rock formations and volcanic wells on the Salt Flats. Bubbling water emerged on the surface in one area of the Salt Flat we visited. 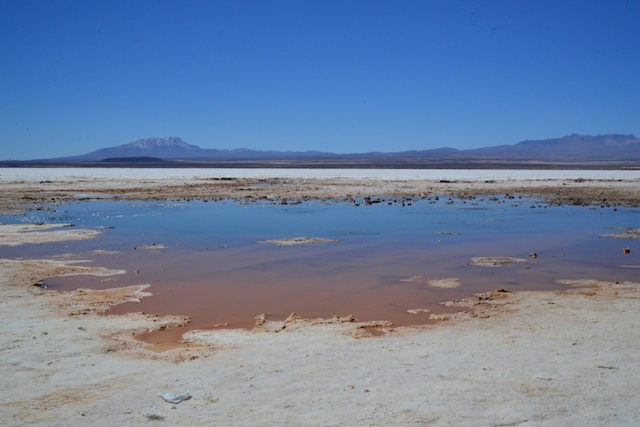 Some rock formations are called islands. We stopped for lunch, toilet and hike on Isla Incahuasi (also called Isla Pescado). The hike to the top took about 20 minutes and it is not for the faint hearted. At about 4,000 meters elevation, the hike took my breath away. Every now and then, I had to stop to catch my breath before continuing to the top. The top of the island presented a great view of the Salt Flat. 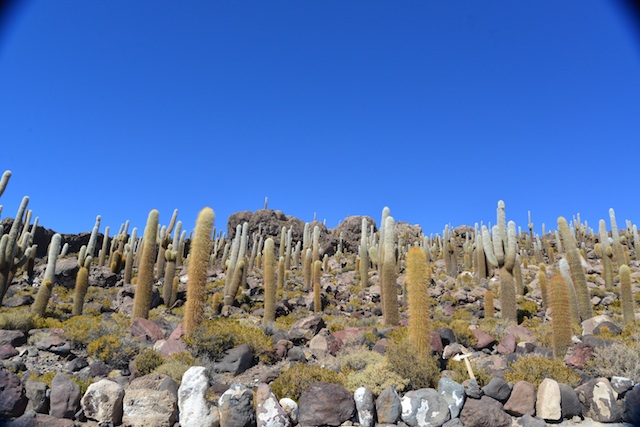 The whole island is a rock formation filled with various sized cacti. Some of these are over 8 meters high. 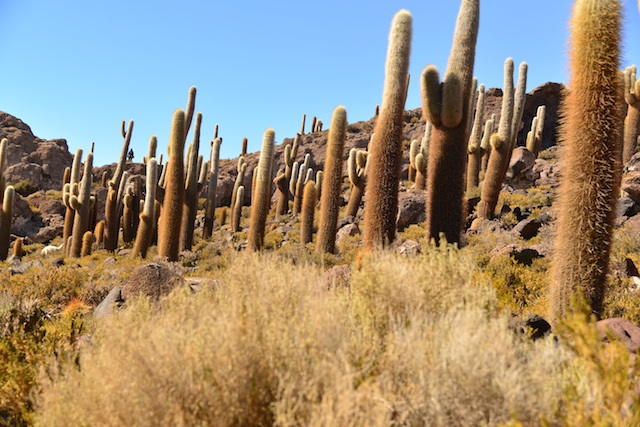 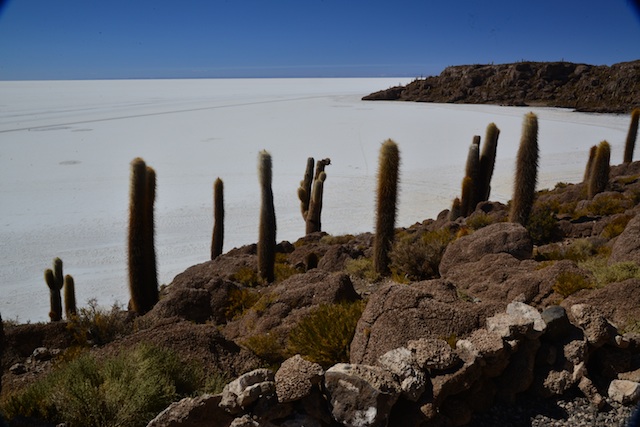 Lunch was included with the tour. The cook came with us and served a healthy portion of chicken, potatoes, salad and bread. Even though the place was crowded with hundreds of tourists and over 20 jeeps were parked along the island, it was quiet…. 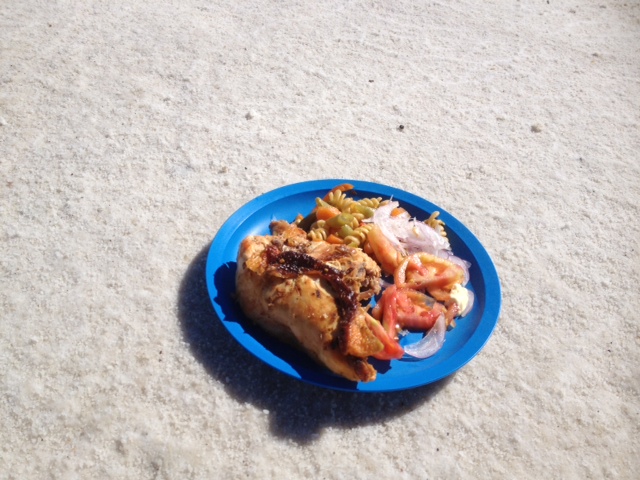 I didn’t know that the highlight of the place for tourists was to take photos with props, colorful clothing and special moves. Because of the vastness of the white salt flat surface and the clear blue sky, the Salt Flats gave illusional images and ways to present an objects’ size. For example here it looked like I am in a wine glass. 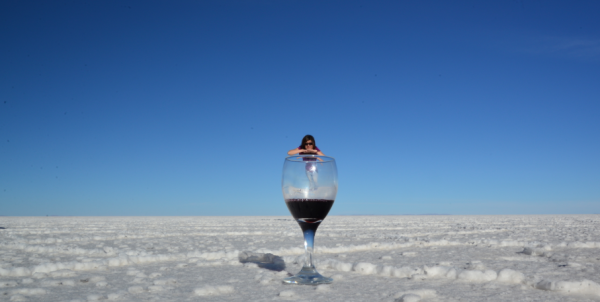 My son and daughter: 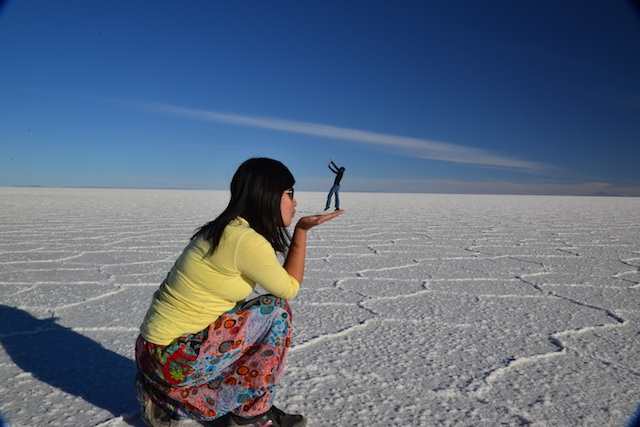 To amateur photographers taking photos here can be daunting. Look at some of the mistakes we made. We had so much fun with all the props our group took along for 'photo sessions' at the Salt Flat with scenes like Mary Poppins and "the man who was supposed to be in the wine glass". Obviously I was the photographer for the man and the wine glass. 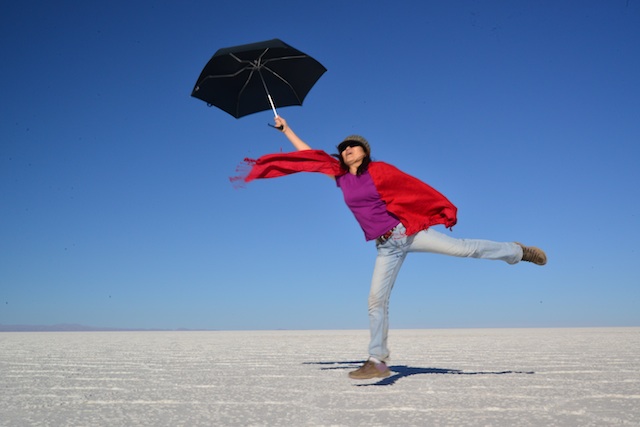 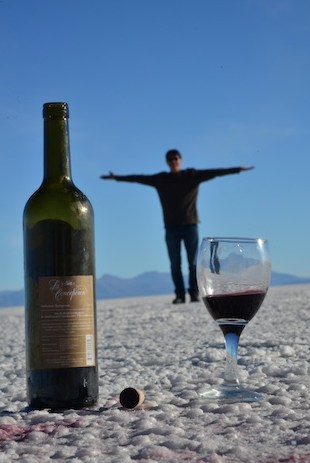 Or this almost perfect pose: 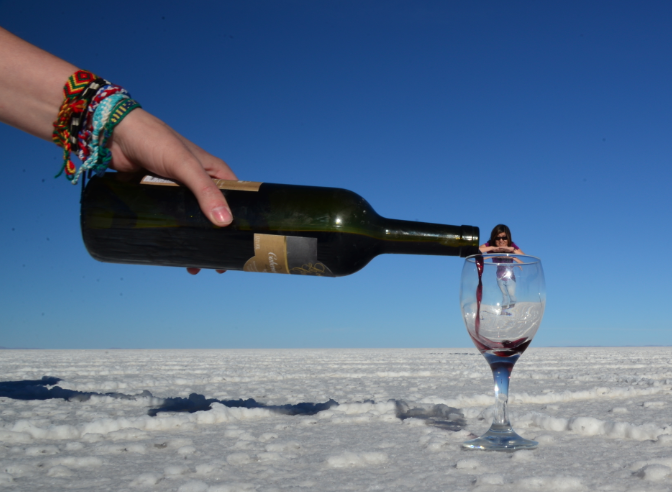 Visiting the Salt Flat is one of the highlights in Bolivia. Have you been to the world’s largest salt flat?