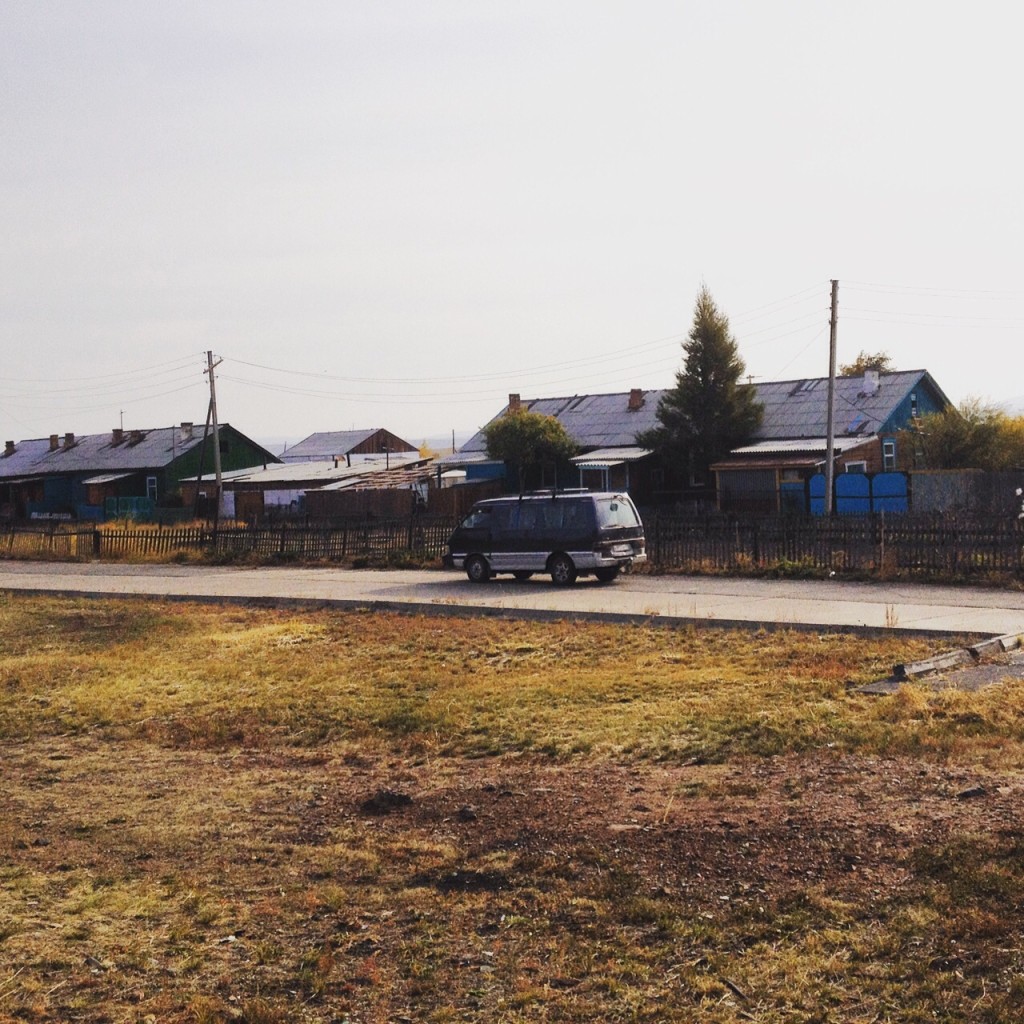 View from the train

Train 362 is the only train that leaves Irkutsk at 5:15 pm Moscow time (10:15 pm Irkutsk time) daily from Irkutsk. The train has only second-class kupe 4-berth compartments and platskartny sleepers (third class).

This is the second part of our Trans Mongolian Railway journey. The first was from Moscow to Irkutsk.

Dominique, the driver who provided transportation from Listyanka to Irkutsk dropped us off at a modern supermarket called Spar just outside Irkutsk to gather our food supplies. This time we were a little smarter with our purchases. Unlike the inner city supermarket in Moscow, Spar has plenty of fresh produce and cooked food.

We bought cooked food for dinner. Bread, cucumbers, spread, cookies, water and more instant noodles and instant mashed potatoes. Grocery prices in Irkutsk are much cheaper than Moscow. The supermarket was newer and had more ethnic varieties like japchae and gimbap, some of the Korean cooked food. 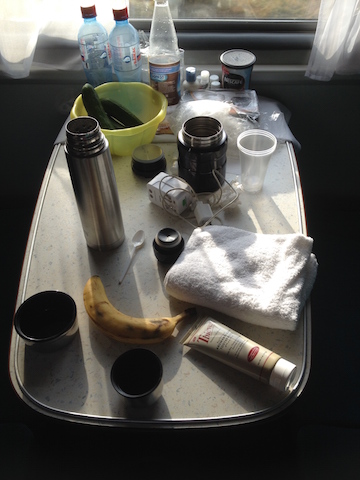 Our table in the compartment

There was only one carriage with foreign tourists and a Russian attendant. The other two were the green Mongolian carriages with platskartny sleepers. Everything in the carriage looked the same as the ones we were on from Moscow to Irkutsk with nine compartments, two toilets and one samovar. The Russian attendant was young and friendly. So I bought a souvenir from her.

We were fast asleep after eating the prepared meals purchased at the supermarket. The Korean japchae (sweet potato starched stir fried noodles) was really authentic.

At the crack of dawn I woke up to this view, the first introduction to many flat lands of the area... 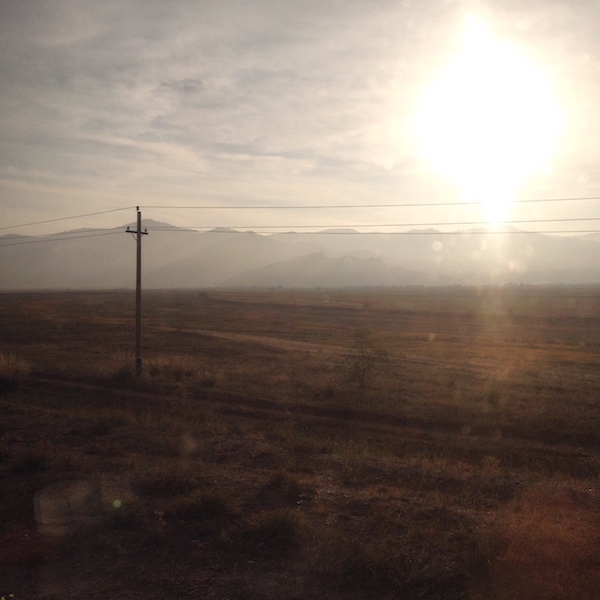 By 9 am every one in the carriage was awake. We met fellow travelers in the carriage. There was an American middle aged lady who is working with an NGO in Mongolia. She was in Irkutsk for a few weeks so she could re-enter Mongolia for another three months stay. From her we got all the tales about Mongolia and Mongolian food.

No locals were on board and the whole carriage was catered to foreigners from Denmark, Australia, New Zealand, England, Germany and the United States.

The view outside was mainly of flat land with patches of bushes and occasional green trees and a few farmlands with houses. We were passing through the steppe land of Siberia. 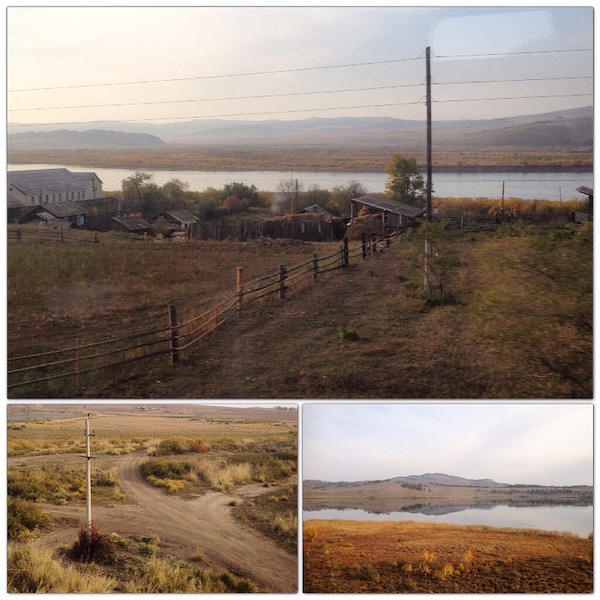 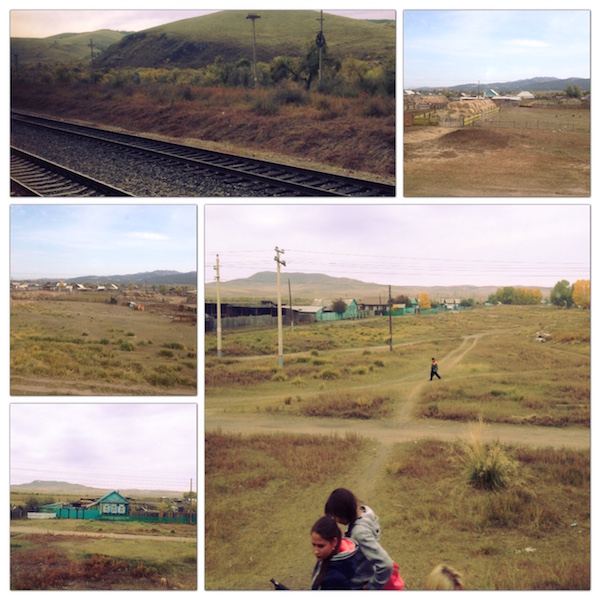 Funny how we did not refer to the timetable posted on the corridor for train stops on this part of the journey. Some of these stops were just for one or two minutes. We had probably gotten used to the routine and knowing this is a ‘short trip’ – so I thought. 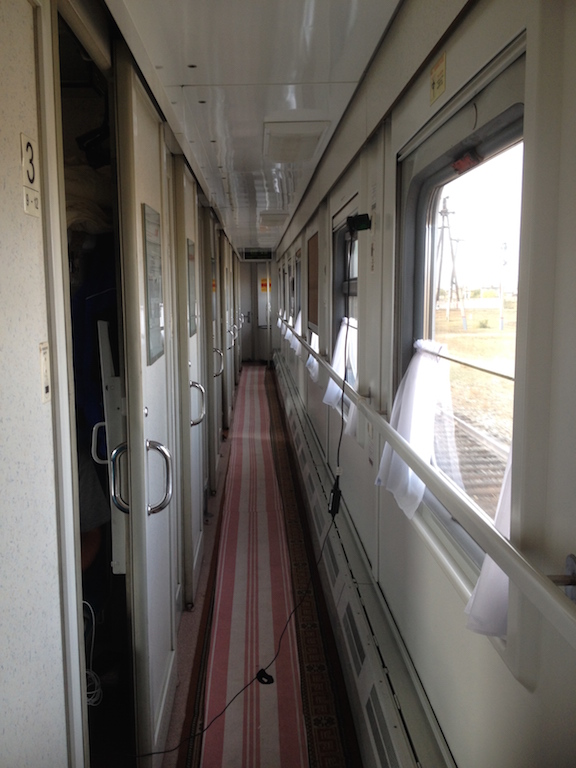 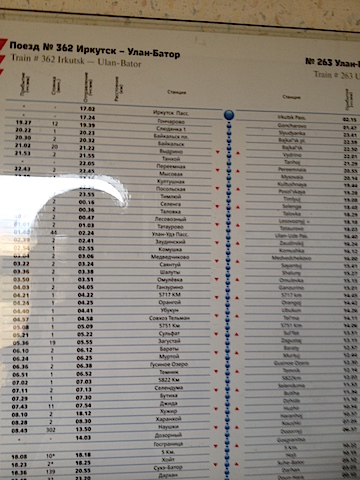 Time just passed by as we enjoyed the view outside and sorting out photos taken in Lake Baikal. You won’t find a dining car on this part of the Trans Mongolian journey. Be prepared with enough food for the one and a half day train ride from Irkutsk to Ulan Bator. 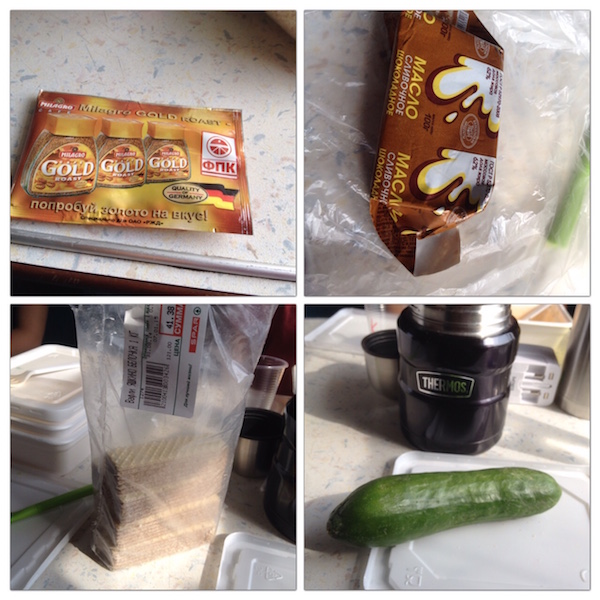 When the train arrived in Naushki just after lunchtime we gave our passports to the Russian authorities and disembarked. We could either take a walk in the area or just sit and wait at the station. I chose to sit and wait, and watch the changing of carriages and engines. They were shuffling and coupling the carriages around. It probably took over three hours just sitting there and looking at the process. 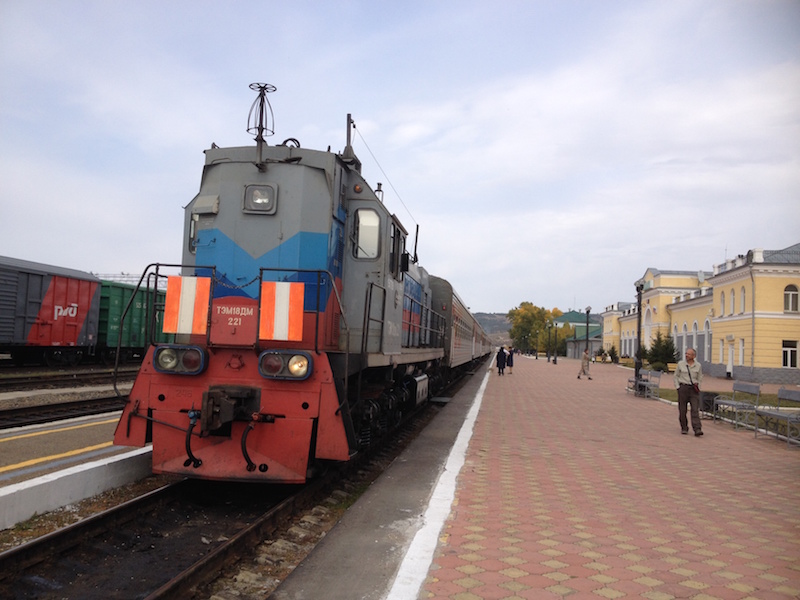 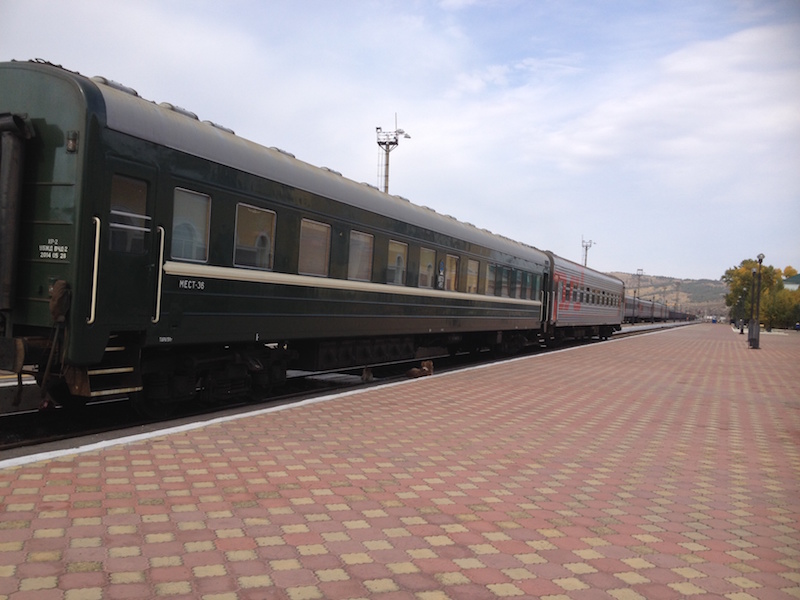 Our train was pulling a Russian and two Mongolian carriages

The train station had clean paid toilets for use. We were not allowed to enter the carriage’s toilets.

When the whole process was over, we boarded and headed towards the Mongolian border in the evening. The scenery changed and I saw a wooden marker with Russian and Mongolian flags signifying the border line between both countries. 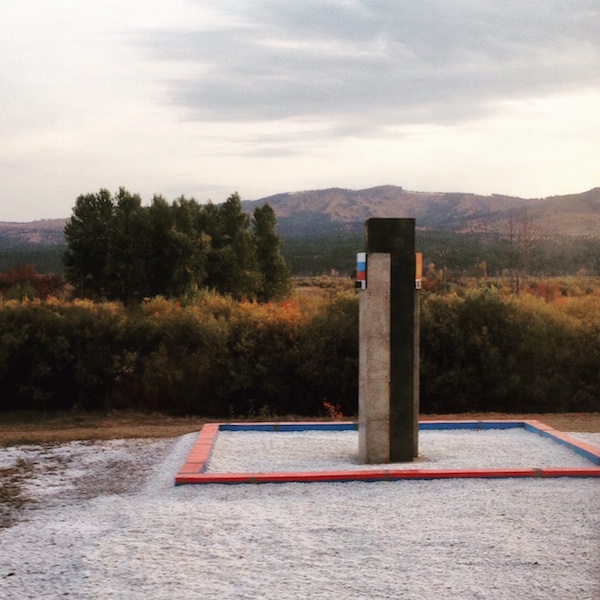 Border between Russia and Mongolia 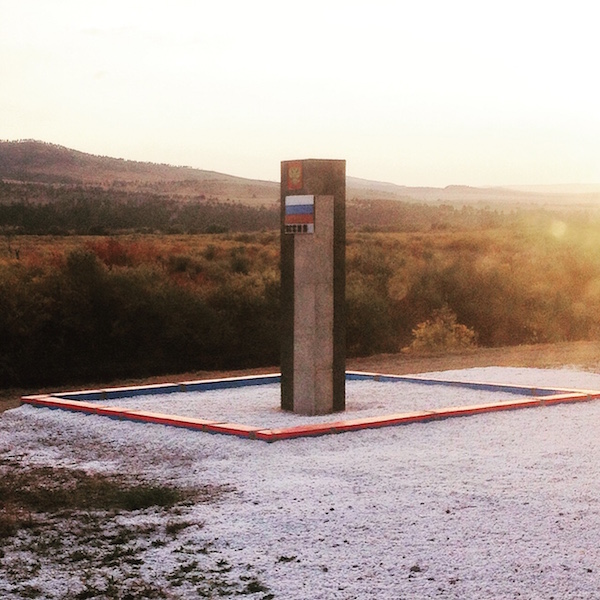 Clearer view of the Russian flag from the Mongolian side

At Sukhe-baatar station Mongolia. Here the Mongolian authorities came with dogs and uniformed men and women to check our passports and immigration forms. They inspected the compartments without making us feel intimidated. Another two hours was needed for custom and immigration. The entire border crossing time was about six hours.

The same train with the Russian Train number 362 was changed to Mongolian Train number 264 in Naushki. We still had the same attendant all the way through to Ulan Bator.

Trans Mongolian train arrived in Ulan Bator Mongolia at 6:10 am the next day. The whole journey including border crossing was around 32 hours. 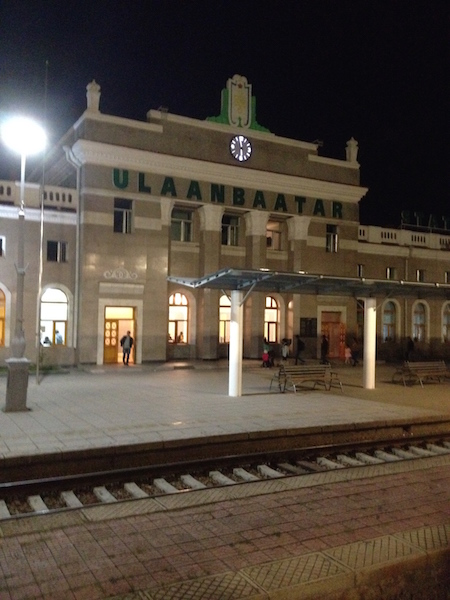 Come on over and find out more on Part III of the journey from Ulan Bator to Beijing China.

« Circum Baikal Railway Tour: Lake Baikal Scenic Tour
Things to Do If You Have One Day in Ulan Bator Mongolia »